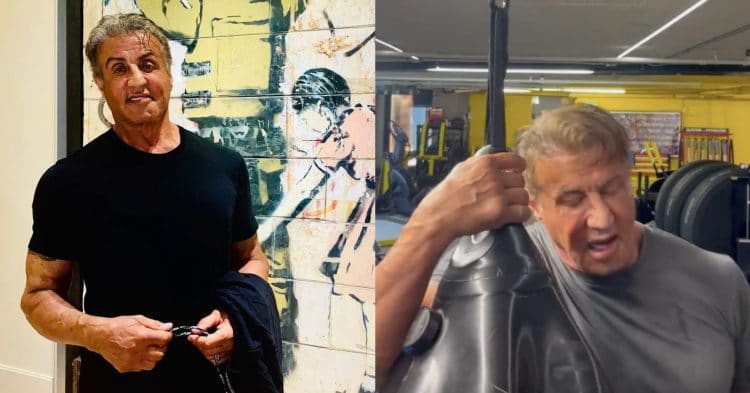 While he has appeared in countless roles since then, Sylvester Stallone first got his big break in 1976, with the release of the first Rocky movie. Four and a half decades later, he proves that he still packs a punch with a recent training session.

Stallone is a bonafide action legend, having appeared in an incredible amount of big budget flicks over the course of his long Hollywood career. He even had a bit of a rivalry with another action star, in Arnold Schwarzenegger, that left them competing to have a higher kill count on screen.

That said, no matter how much the Rambo movies were a success, nor how many Expendable movies come out, Sly will always be known as Rocky Balboa. He channeled the spirt of that Philly boxer once more with a post to his Instagram, that sees the 75-year old doing some sort of farmer’s carry with star spangled dumbbells, before firing some heavy shots at a punching bag.

“Going for it at @gunnarfitness” Stallone wrote.

To be clear, Sylvester is far from the man he was when he was originally appearing as Rocky, or when he was the “leanest” he had ever been for the sequels. Nevertheless, he seems to still pack a punch, especially for someone his age.

It is crazy to see how good of shape Sylvester Stallone still is in, at this point in his life. While some of the workouts he has shared have been called into question for their legitimacy, it is undeniable that fitness is still an important part of his life.

While it is unclear what his plans are next, in terms of his movie career, he has been hinting at some sort of blockbuster action flick coming soon. This seems to be the reason for the New York native’s renewed focus on fitness, although if his arms are any indication, he has never been too far away from the weight room.

Without a doubt, Sylvester Stallone will be going down as one of the greatest action stars of all time, and his punches as Rocky Balboa will forever live in the annals of history. It brings back quite the bit of nostalgia to see him putting work in like this, even after all these years.

Time will tell where he ends up on screen next, but you can bet that whatever role it is, he will bring the heat. He promises old school action, and he is certainly the one able to deliver.