Watch these behemoths have a special place in strength sports history! 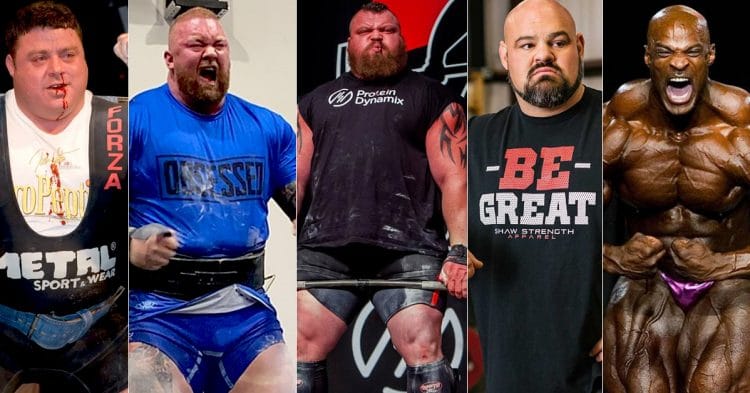 Heaviest Deadlift Of All Time

The deadlift is truly the ultimate standard by which human strength is measured. We know that because it’s one of the big three, main compound lifts (make that four if we’re counting the overhead press). Oh, and it requires total body strength from head to toe to pull that weight off the ground.

Well, we know you’re going to like what we have for you today. A heaviest deadlift countdown list consisting of world records and inhuman feats in general. You more than likely know most, if not all of these beasts if you follow strength sports religiously (we can’t much past you can we)?

But for those who are not as acquainted with deadlift history, today we are sharing the 11 heaviest deadlifts of all time. Plus, we threw in an extra record worth mentioning…

Heaviest Deadlift of All Time: Hide

Some of Heaviest Deadlift Ever:

He recently posted a YouTube video showing how he trains and prepares for the car deadlift event and it’s possible he surpasses this performance sometime in the near future. Shaw also has a lot of great content on his channel so feel free to check it out.

The American Jerry Pritchett is known for his amazing deadlift talent. At the 2016 Giants Live event, he deadlifted a whopping 465kg/1023lbs with a standard deadlift bar.

He was the 2017 America’s Strongest Man champion and a World’s Strongest Man finalist. Pritchett also placed 8th at the recent Arnold Strongman Classic just a few weeks ago.

While this performance doesn’t technically fit within the countdown based on overall weight lifted. Lamar Grant was able to achieve an astronomical feat by deadlifting 305kg/672lbs at 132 pounds! This performance can be described as nothing less than mind-blowing and we’ll give you some time to let it sink in…

Lamar Gant setting world record deadlifts which still stand today despite being 5’2″ and having scoliosis!

The Russian Ivan Makarov attempted the 501kg deadlift in December 2019 of which he was unsuccessful. But he still achieved an insane 470kg/1036lb deadlift using a standard bar.

Although, he’s definitely a threat to the deadlift record.

Zydrunas “Big Z” Savickas from Lithuania is regarded by many to be the greatest Strongman athlete to ever live. In fact, he has won every single major Strongman competition and is the only modern competitor to ever do so. Savickas is a 4-time World’s Strongest Man champion, 8-time Arnold Classic winner, and the list goes on… and on… and on.

He accomplished a 524 kg/ 1,155 lb hummer tire deadlift at the 2014 Arnold Strongman Classic in Columbus, Ohio.

Ronnie Coleman is not part of the numerical countdown but he’s the special guest due to the fact that he was an absolute beast! Coleman was the greatest bodybuilder to ever live. He won 8 straight Mr. Olympia titles (1998-2005) and was known for his superior strength. But what many people may not know about Coleman is that he also competed in powerlifting during the mid-90s.

Ronnie Coleman was also known to have squatted 800 pounds and of course, he could deadlift a ridiculous 900 pounds x 2 reps which he did just a few weeks from the Arnold Classic.

The most successful Strongman competitor currently, Hafthor Bjornsson from Iceland was the 2018 World’s Strongest Man champion and 2020 Arnold Classic winner which was his third consecutive victory in Columbus, Ohio.

Bjornsson deadlifted 474kg/1042.8lbs at the 2019 Arnold Classic on an Elephant bar which makes him the world record holder with that bar. He’s coming for the 501kg deadlift all-time record soon and we’re confident he’s going to get it soon, after failing to do so last year.

Eddie Hall from England is one of the freakiest beings to ever walk the planet. He’s also one of the most entertaining (just watch his videos) and refuses to back down from a challenge.  The World’s Strongest Man 2016 was an event he likely would have won if not for getting injured. But he went on to win the 2017 World’s Strongest Man competition.

He also boasts a few world records and has a very impressive Strongman resume. At the 2016 World’s Strongest Man competition, Hall pulled 472.5kg/1039.5 lbs on the Elephant bar.

What makes powerlifter Andy Bolton’s 1000lb deadlift so impressive is that he was the first man to ever officially lift this much weight off the ground. Therefore, he is and always will be a significant individual in strength sports history.

We’re sure you saw this one coming and yes Eddie Hall made the list once again. Hall sets the all-time deadlift record of 500kg/1,102 lbs, 79 st which he achieved in 2016. He also became the first man to ever lift 1100 lbs and even passed out after his world-record performance.

On May 2nd, 2020 Hafthor “The Mountain” Bjornsson deadlifted 501kg and sets the all-time world record. 30-year-old Arnold Strongman Classic champion also sets an unofficial Elephant bar world record (480kg/1058lbs) in February and then he smoked 470kgs/1036lbs last month live on Twitch which was his last heavy session before the world-record breaking day.

The lift made history and now, he’s the new king of the deadlift.

Now, the next guy isn’t in the video and he didn’t even perform a conventional deadlift. However, he does hold the all-time ‘seated’ deadlift world record, therefore, we included him in the list. Martin Tye is a disabled veteran who successfully lifted 550kg/1,212lbs off the ground while seated at the 2020 Arnold Classic, Ohio.

This feat placed him in the Guinness Book of World Records and the UK based Strongman has big ambitions looking forward.

We hope you enjoyed this top 10 list of world record deadlift performances and a few special guests as well. These feats are truly incredible and we can’t wait to see if someone breaks Eddie Hall’s all-time record sometime soon. Although, we’re thinking Hafthor Bjornsson has the best chance currently.

Who has the world record for deadlift?

Hafthor Julius Bjornsson! On May 2nd, 2020 The Mountain deadlifted 501kg and sets the all-time world record.

The previous world record holder was Eddie Hall who deadlifted a massive 500kg/1,102lbs at Europe’s Strongest Man in 2016.

Hafthor Bjornsson (501kg) and Eddie Hall (500kg) are the only two men recorded to have ever lifted 500kg.

Hafthor Bjornsson deadlifted 501kg and sets the all-time world record on May 2nd, 2020.

What is the most weight lifted by a human?

The most weight lifted by a human was 501kg/1104.52 lbs which was accomplished by Strongman Hafthor Bjornsson on 2nd May, 2020.

His record was equipped with a multi-ply squat suit and knee wraps.

What is the heaviest squat?

How much did Thor deadlift?

He also won first place at this competition.