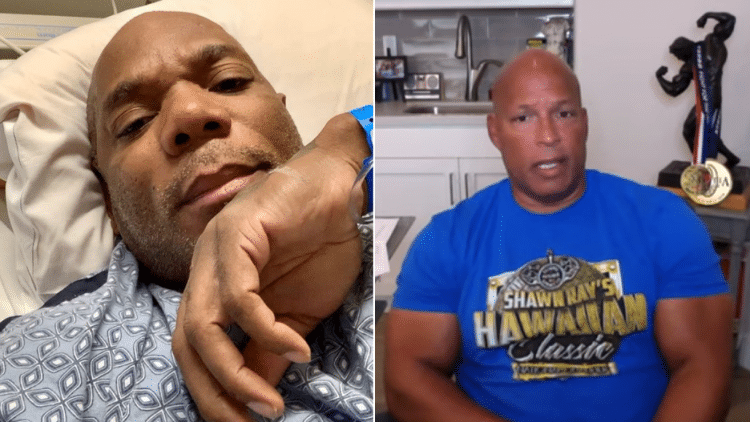 The bodybuilding world was in shock upon hearing Flex Wheeler was forced to have a partial amputation. Now Shawn Ray provides details on what caused this to happen.

Ray is one of the few people to talk to Wheeler since he was rushed to the hospital last week. Following the loss of the lower part of his right leg, Wheeler has yet to give a public statement. However, speaking with RXMuscle, Ray opens up a bit on what caused this tragedy to happen.

“This is not something that happened overnight. It’s been an ongoing struggle, and a continuous battle for Flex.

It has a lot more to do with his circulatory vascular system, than it does to do with just his lower extremities. He’d been in excruciating pain for a long time, even back before he made his infamous comeback two years ago.

So with that being a consistent problem, and with him operating with one kidney already.

It got to a point Dave, where earlier this year, he was hospitalized for three months, put into an induced coma, while they went in there and did some exploratory vein realignment-type work and solve the problem that way.

But he was told even then, that the worst case scenario was that he may lose a limb.”

Ray went on to explain that Wheeler has been dealing with some depression. Therefore, he was glad that Flex chose to get the amputation, as opposed to losing his life. Moreover, he confirmed reports that Flex Wheeler is maintaining a positive attitude,

Wheeler has a ton of concern from the bodybuilding community. People have been reaching out to Ray, to try to reach Flex. Furthermore, people have been flooding his social media with messages of support, and prayers.

At this point, Shawn Ray went on to explain that he does not know if the issue is related to Wheeler’s kidney.

Ray said that Wheeler was being given pain medications, which was concerning since that has to process through the kidneys. Nevertheless, he explained that Flex was bypassing the kidneys, perhaps through dialysis. Although Shawn admits that he does not know a lot about that process.

According to Ray, this leg amputation was a final solution for the health problems of Flex Wheeler. He could have had compounding issues, which led to the decision to remove the leg. However, at this point, all that is left is for him to heal up, and rest in the hospital.

In the full interview (video below), Shawn Ray further discusses the return to bodybuilding Flex Wheeler made in 2017. They discussed how pushing through the pain then, could have led to this situation. Nevertheless, everyone is hoping for a speedy recovery for the bodybuilding legend.

Video: 15-yo Mahailya Reeves’ Record-Setting Bench Press, & Other Big Lifts From The Week