With just two weeks until the 2020 Mr. Olympia, Roelly Winklaar looks to be lean and conditioned in ways that he has not been before 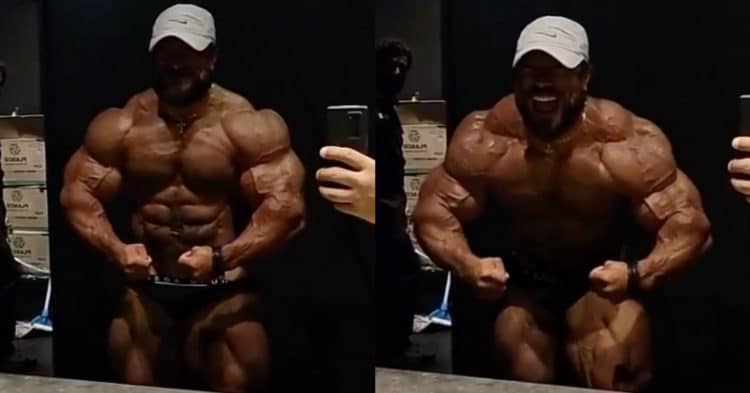 As the 2020 Mr. Olympia approaches, we have been seeing a variety of physique updates from Roelly Winklaar. With two weeks until the show, he has posted another update that has fans buzzing about his potential in this year’s contest.

Ahead of every Olympia, Winklaar never ceases to get the attention of fans with his insane looking physique updates. Whether or not he carries that over to the stage is often another story, but he is one of the freakiest bodybuilders in the world, and looks huge even if he loses. However the size is not his problem, as he instead seems to struggle with his conditioning and finding the right balance between that and maximizing his natural size. There are times where he nails it, such as the 2018 Arnold Classic Australia, and other times where he seems to miss the mark, like his fifth place score at the 2019 Olympia.

That being said, with the 2020 Mr. Olympia just two weeks away, Roelly Winklaar has begun to dial things in for the final stages of his prep. Taking to his Instagram, his coach shared a physique update with Roelly doing some flexing in the mirror. This post has his fans going crazy, as he looks like a completely different bodybuilder than the Roelly of years past.

The condition that Winklaar has in this post is absolutely insane. He is normally much bigger and bulkier this close to competition, but he seems to have trimmed down this year, putting a focus on his conditioning instead. This has led to him looking way more shredded and peeled leading into the event.

It is virtually impossible for Winklaar to not have super huge arms, that much is always the case. However there is more to his physique than just his upper body. A few weeks back he took a photo that showed off the condition of his legs, and they are looking pretty solid. This post was a few weeks ago too, so it is safe to assume he has improved his legs even more since then.

Time will tell if this decision from Roelly Winklaar to slim down a bit will pay off on the Olympia stage. From what it looks like, it seems that this was the right call for him to make. He is always going to be a crazy looking bodybuilder, but if he is getting his conditioning where it needs to be, he could be nearly unstoppable.