Ronnie Coleman Gives It His All, Pumping Some Iron In The Gym 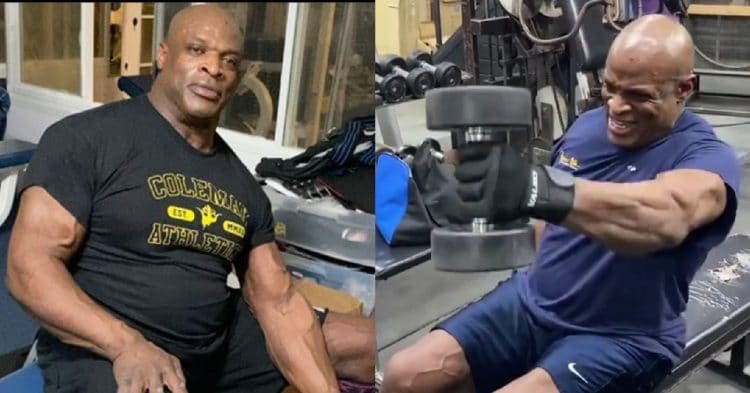 Bodybuilding great Ronnie Coleman is one of the most beloved figures in the sport of bodybuilding. He was recently in the gym, putting some work in, and it reminded us just how much of a beast he really is.

If you said that Big Ron was the greatest bodybuilder of all time, you would be hard pressed to find a good argument to the contrary. He is tied for the most amount of Mr. Olympia wins in the sport’s history, as well as holding the record for most IFBB Pro wins. Not to mention the fact that he has become a beloved figure within the community, even building relationships with the likes of WWE legend Hulk Hogan. He has the respect of bodybuilders and fans alike, with one of the best resumes on top of that.

Recently Ronnie Coleman was seen putting some work in at the gym. Taking to his Instagram, he uploaded a video of him doing some dumbbell front hammer raises, while sitting on a bench. It is not the most extensive look at his workouts nowadays, but he explained that he is just looking to stay in shape during these difficult and complicated times.

“Still trying my best to stay in shape in these Covid times. Only the strong survive and I’ve been strong my entire life. You can never keep a good motivated man down, never.”

The last several years have been tough on Ronnie Coleman, in terms of his physical health. He has been having numerous issues with his neck and his spine, which has led to a multitude of surgeries over the years. So for him to get back to training, it must be difficult. However like he said, a motivated man can not be kept down.

It is unclear how often Coleman is hitting the weights these days. However a few weeks ago he shared another training update with his fans. This one saw him crushing a bench press set like it is nothing.

It is always a nice thing to see Ronnie Coleman at the gym and training the best that he can. Obviously the last few months have been hard on most people, even if they do not have to struggle with fused discs in their spine. So it is an important thing for him to keep his body in the best shape possible, in order to help prevent further issues with it.

Berberine for Weight Loss: Does It Really Work?