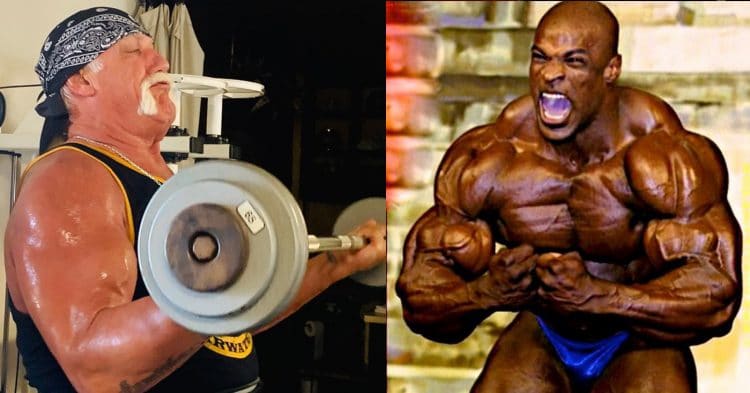 Bodybuilding legend Ronnie Coleman was excited to see the kind message sent to him by pro wrestling icon Hulk Hogan. Now he responds in kind, with his own message directed at the wrestler.

As it turns out, Hogan is a big fan of Coleman, which he made clear recently. The 66-year old wrestling legend was doing a workout, when he decided to shout out the 8-time Olympia winner. He said that he respected Ronnie’s ability to persevere through countless surgeries, which is a struggle that he knows a lot about, himself. The two have had similar issues with their bodies, so Hogan can relate to those struggles. In addition to offering those words of respect, he also suggested that the two do some sort of wrestling together.

Although Ronnie Coleman responded shortly after he saw the video from Hulk Hogan, it seems he has been thinking a lot about it. Taking to Instagram recently, he nearly copied Hogan’s video, offering his own kind words about the wrestler. Moreover he doubled down on the idea of wrestling with the champ.

“What’s up there, Mr. Hulk Hogan? I saw that video that you made, I want to say I appreciate that, coming from a legend like you. I just want you to know that I’ve always been a big fan. I remember when you were with the WWF. That’s how far you go back, and I go back, to being old legends. I remember the day when you picked up Andre the Giant, and you slammed him on that floor like he was a light weight baby. A real light weight baby, in the form of a real baby. We all know Andre the Giant was a 7-foot-five, 7-foot-six, 500lb man. So we know what it takes to pick up somebody like that. It takes a lot of strength, a lot of will, a lot of courage, a lot of eating your vitamins like we used to say back in the day. I remember that!

“I heard you say that you wanted to do a Geritol match. Well guess what, I’m ready to accept that challenge any day, anytime, and anywhere. We can do it right here, in my established home gym, where I’ve got some of the best equipment on Earth. Or we can do it at your home gym, where I know you too have some of the best equipment ever made on this Earth. But let’s just remember one thing, Mr. Hulk Hogan, I still am eight-time Mr. O, and I’ve still got those 22-inch pythons, like you used to say back in the day. I’m still eating them vitamins, and I still can flex em like Big Ron used to do back in the day!”

What do you think of this budding relationship between Hulk Hogan and Ronnie Coleman?