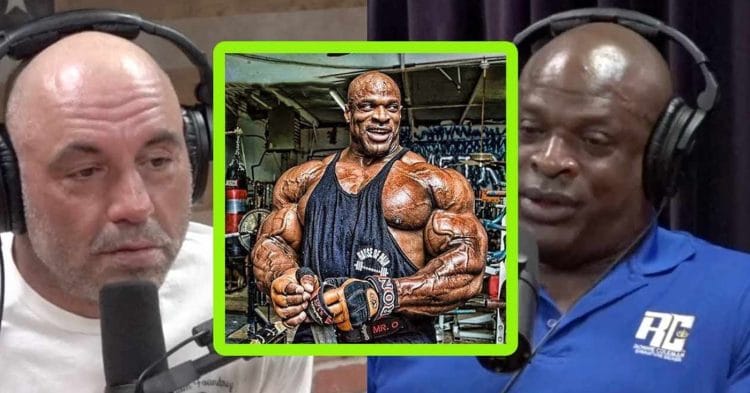 Eight-time Mr. Olympia Ronnie Coleman joined the most popular podcast on Earth recently to talk with Joe Rogan about his life, career, and more. And at one point in the interview, the subject of steroid use came up which is obviously a big part of bodybuilding.

Read: Ronnie Coleman Opens Up To Joe Rogan About Getting Insane 13 Surgeries Post-Bodybuilding

So to start off this part of the interview, Rogan asked, “What kind of steroids were dudes doing back then?”

“Basic. You know you got your test (testosterone), D-bol (Dianabol)… just basic stuff“.

He explained that back then, the DEA (Drug Enforcement Administration) would try to find out what they were taking. Although, the bodybuilders were getting prescriptions to use. And he also mentioned that kids were taking steroids and committing suicide so that DEA wanted to get them off of the stuff they were taking.

Coleman then talked about how much genetics is a factor in getting as big as the bodybuilders who compete on stage.

“probably like 1% that could get as big as I got and I was the only guy. Nobody has duplicated that since… and to be in that condition, and be healthy”. I don’t have any health problems besides the injuries, my liver, kidneys, and heart are all good.”

Coleman said he didn’t take a lot of steroids when he was competing either. He just worked out a lot and was genetically gifted. Rogan then mentioned that Dorian Yates (6x Mr. Olympia) said he wasn’t taking a lot either.

But what’s very interesting is that Coleman said he would stop the steroids cold turkey without cycling off or taking anything and he’d feel totally fine for the three months he was off of them.

Rogan told him he just has great genetics and Coleman’s response was, “craziest ever“.

Then he went on to say that he could squat 7-800 pounds naturally which is unheard of. Not to mention, he apparently still maintained his massive size of over 300 lbs. But then he’d get back on with doctor supervision and while getting blood work done every few months.

Rogan was curious if steroid use was allowed to be talked about while he was competing. “Yeah, I talked about it, I had no reason to hide it like people ain’t stupid,” although people would still choose to hide the fact that they were taking anything.

The next part of the discussion was that Coleman was known to be drug-free while still looking insanely impressive due to his top-tier genetics. He told Rogan that he didn’t use anything until he was 30 years old. However, he was tired of getting his ass kicked as he explained.

So this was when he decided that it was time to started using in order to be more competitive. He’d only place as high as third drug-free but it wasn’t until fellow bodybuilder Flex Wheeler suggested he use steroids that he started to really realize his full potential.

“He taught me everything I know. He also got me the best nutritionist ever, that’s how I won my first Olympia.”

Coleman said that it was smart to learn about steroids from other bodybuilders who were using and placing well which is why Flex Wheeler was the perfect mentor where this was concerned.

Rogan then asked how much of a night and day difference it was when he started taking stuff. Coleman said the only difference it made was the conditioning which is how shredded he was. He explained that his strength didn’t go up that much.

This was the last part of the discussion.

Watch the full clip below…