When it comes to the rowing machine, there are some misconceptions the CrossFit community has embraced—mistakes that can easily be fixed with a little education and effort. 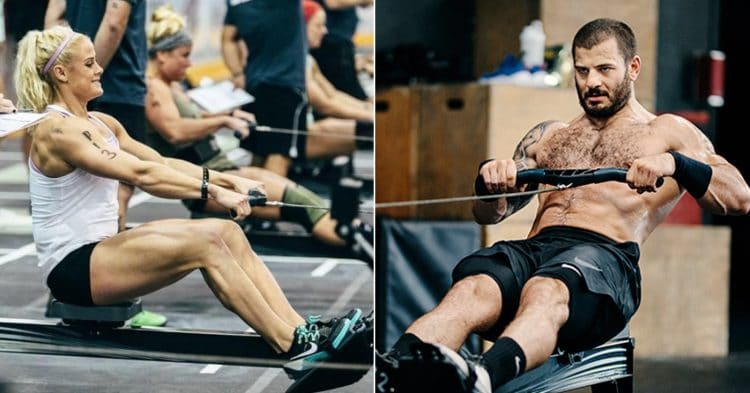 As much as I love CrossFit, I have often joked that as a community, we’re butchering Olympic sports, one at a time.

I remember watching the uncharacteristic “freestyle” techniques among the athletes during the swimming event at the 2013 CrossFit Games—The Pool: 10 rounds of a 25-meter swim and three bar muscle-ups—and thinking, “I sure hope high level swimmers aren’t watching this right now.”

Similarly, if Simone Biles watched the freestanding handstand hold event at the recent 2020 Games, I’m sure she would have chuckled at all the extended spines and bent knees.

And, as a former college rower, I can definitely tell you I’m always amused by the rowing strokes I see happening at CrossFit gyms far and wide.

Mostly, however, the mistakes I see CrossFit athletes make stem from misconceptions that have trickled into the community over the years, even among CrossFit coaches.

One of the most common misconceptions I have witnessed in my 11 years in the community are athletes who crank the drag to an 8, 9 or 10, thinking this somehow will make them look tougher or row faster. The only time you should maybe consider rowing at an 8 or 9 is if you’re doing super hard, short distances, such as an all-out one minute effort.

Though you set the drag on the dial on the right-hand side of the machine, each machine actually measures its drag factor internally. Depending on a few things, such as how much dust is in the flywheel, the drag from one machine to the next isn’t 100 percent consistent. To find out the machine’s true drag factor, you have to use the drag factor function on the monitor and then take a few strokes until it spits out the drag number.

When male and female rowers test their 2 km row on the ergometer (aka rowing machine), they must set their drag factor to 130 for men and 110 for women. These numbers have been determined to best mimic the water. This could mean setting the drag at a 5 on one machine and a 6.5 on another machine.

In the case of CrossFit athletes doing multi-modal workouts, the best thing to do is to always keep your drag between a four and a six. Then start rowing. If you just don’t feel like you’re able to generate enough power, then raise the drag by one number using the dial on the right hand side of the flywheel. On the other hand, if the machine feels real heavy, then decrease the drag by one number.

I have no idea where this misconception came from, but many CrossFit athletes have been told by various coaches that their heels should never raise off the footplate. While this principle is true for a squat, it’s not the case for rowing.

The idea is to get as compressed as you can at the catch—the start of the stroke—without compromising your long, neutral spine. This allows you to have the longest stroke possible, which is one of the keys to rowing.

Doing this will put you in a position where your heels will definitely raise off the footplate. Then, begin the stroke by driving your heels down hard to get as much power as you can through the drive.

If, however, you feel like your heels are lifting off the footplate too much, then you can lower your feet a bit until it feels more comfortable.

Mistake #3: Pausing at the finish

This is another big one: CrossFit athletes tend to pause for a second at the finish of the stroke when the handle is at your chest and you’re leaning back, thinking this is a nice little chance to rest. And then, to catch up to your legs, you make a second mistake by driving your hands back out at turbo speed.

While not a misconception—most people have heard this one before—but pulling too soon is one of the most common mistakes I witness on a daily basis.

The first part of the stroke should be all legs, starting with driving the heels down and then the rest of your legs. Your arms shouldn’t start pulling until they have passed your knees. Until that point, it should feel like you are suspended off the machine, similar to the feeling of hanging from a bar.

In theory, it should be fairly easy to hold a consistent pace on the rowing machine, as you have a monitor staring you in the face displaying your speed. 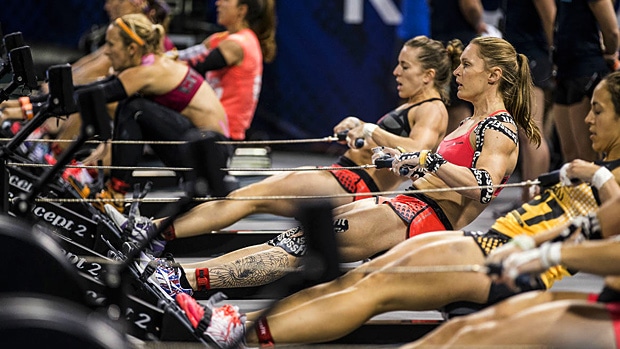 However, more often than not I see CrossFit athletes going out too hard at the start of a piece.

Your split time — the number in the middle of the screen that tells you your speed per 500 meters (i.e. 2:00/500 m) — should be consistent across whatever distance you’re rowing. The only exception might be the start and the finish of a piece — the first 100 to 150 meters of, let’s say a 2 km row — when you’re trying to get the flywheel moving at the start, and emptying the tank at the finish.

It helps to set your monitor for the distance you’re about to row. For example, if you’re rowing a 2 km row, set the distance to start at 2 km. That way, you can look at the memory on your machine at the end to see if you were consistent.

Your monitor’s memory function will break the piece into 400-meter increments. The goal is that each 400 meters is within one or two splits of each other. So, if you rowed an 8-minute 2 km row, you would want each part of the piece to be in and around 2:00/500m. If, on the other hand, your first 400 meters was completed at an average speed of 1:50/500m and your last at 2:10/500m, you know you weren’t consistent.

Learning to be consistent takes time and a deliberate effort to track your speed, but it’s probably the most important tip to internalize.

When it comes to rowing, small changes make a big difference. Having your drag set properly, driving your heels down, keeping the boat moving at the finish, suspending off the handle during the drive, and being familiar with an appropriate pace for you, can quickly help you become more efficient, meaning you’ll be moving faster and will likely be less tired.

Emily Beers is a health, fitness and nutrition writer. She has also been coaching fitness at MadLab School of Fitness in Vancouver, B.C. since 2009. A former college basketball player and rower, Emily became heavily involved in CrossFit after finishing her Masters degree in journalism at the University of Western Ontario. She competed at the 2014 CrossFit Games and also worked with CrossFit Inc.'s media team for eight years. You can also find her work at Morning Chalk Up, Barbend, Precision Nutrition, Breaking Muscle and a host of other fitness and nutrition companies and media outlets.