Brandon Curry Talks His Rivalry With Phil Heath Before They Go Head-To-Head At The 2020 Mr. Olympia 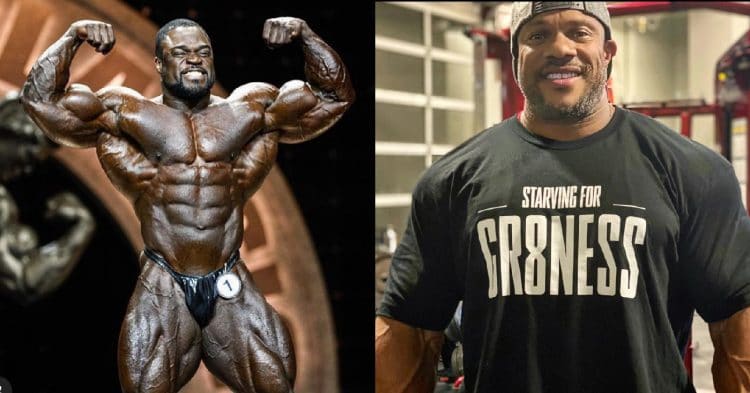 Heading Into the 2020 Mr. Olympia, the main point of conversation revolves around the rivalry between Brandon Curry and Phil Heath. The current Mr. O thinks that Phil has him on his mind heading into this contest.

When Curry won the 2019 Mr. Olympia it was certainly an impressive win, but it was unfortunately marred with a bit of controversy from things outside of his control. The seven-time Mr. Olympia champ Phil Heath was taking some time away from the sport, while the man who beat him, 2018 Mr. Olympia Shawn Rhoden dealt with legal problems interfering with his ability to compete. This led many to feel like Brandon’s win was undeserved, despite the fact that he beat everyone he took the stage against.

Now Brandon Curry has the opportunity to silence the doubters as Phil Heath returns for the 2020 Mr. Olympia. Leading up to the contest, there has been a since of rivalry surrounding these two, through a combination of subtle shade being thrown and coaches trash talking to add fuel to the fire. However as Brandon explained in a recent interview, he does not see this rivalry as anything too serious, instead being excited for the opportunity to compete against Heath.

“This is something I’ve been dreaming about, something I’ve been hoping about, so it’s really a dream come true,” Curry said. “I was waiting all last year for Phil to announce he was coming to the Olympia but it never happened. So it got my hopes down, thinking he officially retired. So trust me, when he announced that he was going to be at the Olympia this year it was like wooo! I could just feel a supercharge go through me. It was something I’ve been waiting on. I’ve been looking up to Phil my whole career, and it’s been a dream to be on stage and stand toe-to-toe with him. It looks like I’m finally going to get my opportunity.”

On Brandon’s Coach Throwing Some Shade

Typically Brandon Curry is not the type to talk a whole lot of trash, even when it comes to his rivals like Phil Heath. Curry’s coach on the other hand, Abdullah Al Otaibi recently decided to throw some shade Phil’s way recently, while giving some shine to Brandon. While Brandon does not engage in these antics, he finds his coach’s behavior humorous.

“Abdullah’s tenacious,” Curry said. “It’s just his personality. He has his heart on his sleeve, he’s going to say how he feels and he likes to fight. He really does. He likes a challenge. So he’s like the side of my personality that I can hold inside, like more of a competitive side, but he lets it all out. So I just let him do him. I’m going to do me, he’s going to do him. I will say that I respect Phil nonetheless, and Abdullah is a big fan of Phil Heath so this is a big opportunity to us.”

There has been a bit of trash talking on the part of Phil Heath as well. The 7x Mr. O has referenced Brandon Curry in comments on social media, seemingly firing shots at the current Olympia champ. In Brandon’s eyes, this just means that he is in Phil’s head, which is not something he is particularly bothered by.

“For me to get that kind of personal attention from Phil Heath competitively, knowing that that’s just typical Phil Heath genre from all the years he’s been competing is pretty cool,” Curry explained. “I know that’s typical Phil Heath. He comes from basketball, he’s going to talk a little junk on the side in his way. That doesn’t bother me. It’s really cool just to see like ‘Oh, he’s talking about me.’ He’s got me on his mind, and I like to be on Phil Heath’s mind.”

There is certainly a lot of hype to see Brandon Curry and Phil Heath go head to head at the 2020 Mr. Olympia. It will interesting to see who looks better on the day, and who walks away with the Olympia title.

Special Forces Training: How To Be Fit For Anything