Bodybuilder Ryan Crowley reflects on the terrible injury he suffered while bench pressing, and gives an update on his healing progress 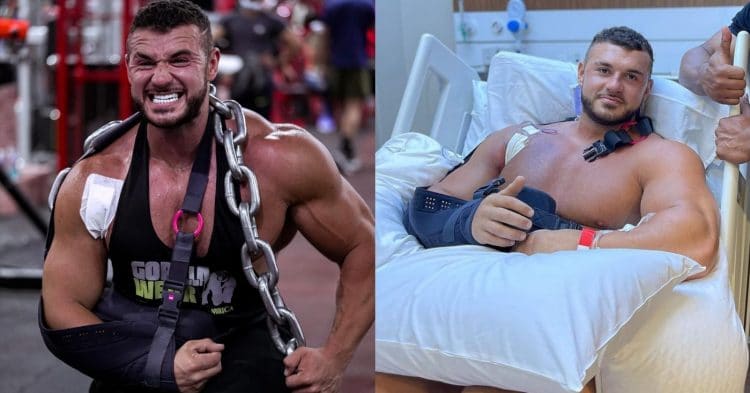 In one of the most brutal gym injuries in recent memory, Ryan Crowley completely destroyed his pec. A few weeks later he is able to reflect on the injury, and give an update on the process of his recovery.

A few weeks back, powerlifting and bodybuilding fans alike were mortified at the sight of the injury that Crowley sustained while training with Larry Wheels. He was trying to push himself on the bench press, when the unthinkable happened.

Having pushed the weight as far as he could go, Ryan suffered a horrendous accident that left him with a torn pec. A GoFundMe was set up to help him pay for the surgery, and after a brief period where it seemed like his career could be ended, Ryan was able to get the damage in his tendon repaired.

About a month has passed since this injury, but Ryan Crowley is still thinking about what went wrong in this lift. In fact, he thinks that he has narrowed down why the injury happened.

Speaking in a recent interview, Ryan explained that as much as it was his fault for pushing the weight further than his limit without proper training, there was more to it than that. He believes that he warmed up too much and that led to the his pec giving out.

“Normally I have problems with my left shoulder so I try to shy away from any kind of bench press stuff. But we were filming and they wanted to do the exercise so I was like okay, I’ll do it. I warmed up, and did a lot of warm-ups, which is not something I would necessarily normally do,” Crowley said.

“Part of me thinks that maybe the excessive warming up and the bad stretching could have been a cause for this, but I don’t know obviously at the end of the day the weight was too much for me… Luckily Larry was there to probably save my life to be honest because I think it probably would have killed me, or at least paralyzed me pretty badly if he weren’t.”

Now that he has gotten the surgery, Ryan Crowley is on the road to recovery. Typically this is a serious injury that takes several months to heal from, but apparently he is far ahead of schedule.

He says that he is going to physical therapy, and that his therapist has been blown away by his progress. He has been able to get out of the sling quicker than most, and will hopefully be back to action soon.

“I was actually blown away, because a lot of people stay in the sling for six weeks at least with no movement. But my physio said to me that in 25 years of him being a therapist, this is the fastest he has seen anyone heal from something like this,” Crowley said.

“They told me originally that it would be 8 months for me to get like 90 percent back in the gym, but now he’s like maybe 3 (months).”

This was a terrible injury, and it is great to see that Ryan Crowley is healing so quickly. It seems like he has learned his lesson about pushing himself too far, and will not make the same mistake again.