CrossFit superstar Sara Sigmundsdottir was forced under the knife to repair a torn ACL, and the procedure was a success 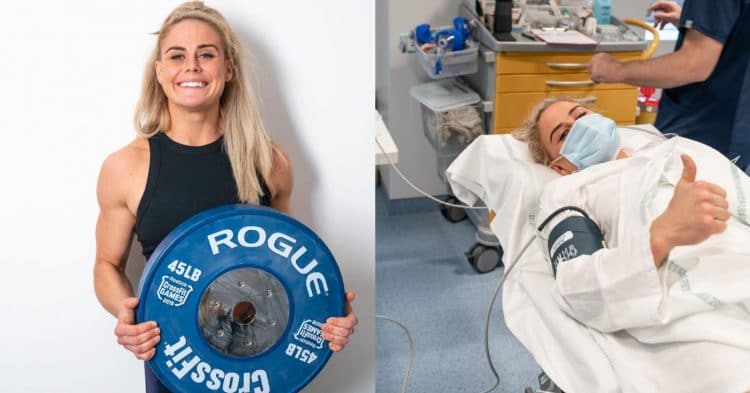 ACL tears are nothing new to elite athletes, but that does not stop them from being a problem. Luckily Sara Sigmundsdottir was able to get hers repaired, after a successful surgery this week.

With six appearances at the Games under her belt, fans were looking forward to seeing what Sigmundsdottir could do in 2021. Unfortunately those dreams were derailed after a knee injury left her with a torn ACL, forcing her to withdraw from the season.

Nevertheless, Sara promised that when she returned she would look better than ever. However the first step in that process would be to get the ACL repaired, something that was going to require surgery.

Posting to Instagram on Monday, Sara Sigmundsdottir gave an inside look at things just before she went under the knife. Here, she gave a brief recap of the injury, and expressed her excitement to get back to action sooner rather than later.

“Today is surgery day and as you read this I am probably fast asleep on the operating table, having a brand new ACL inserted in my knee,” Sigmundsdottir wrote.

“Since the 9th of March when the injury occurred I have done everything I can to make sure that I am in the best possible shape before I start my post-op rehabilitation. I’ve been working closely with my coach and my physiotherapist, doing all kinds of “prehab” exercises and focusing on the range of motion in my knee. It has been going really well and it has also been nice to be able to shift some weights and break a little sweat, because once the operation is done there will be quite some time where I am limited to very little training.

I am feeling upbeat and confident. I have assembled such a great team around me and I have so many good people in my life who make this ride, even though it’s been a bumpy one, so much worth it. Then I have all of you, my supporters, giving me strength and purpose❤️ “

Sure enough, a few hours later Sara Sigmundsdottir returned to her social media to reveal that everything went well with the procedure. The Icelandic superstar can be seen giving a positive thumbs up, as she prepares for the process of rehabbing the knee.

“The operation was a success. Let the rehabilitation begin🛠”

As exciting as it is to see Sara Sigmundsdottir having successfully gotten the surgery, it is important to note that the recovery time for an ACL replacement does typically run from 9-12 months. So it is unclear if she will be back in shape in time for the 2022 CrossFit Games season.

That said, if there is anyone who could do it, it is her. She is a strong willed athlete with an immense knowledge on the process of recovery, so it would not at all be surprising to see her back in action quicker than the average person.