Iceland's Sara Sigmundsdottir opens up about the pain of her ruptured ACL, but thinks she'll be a better athlete on the other side of it. 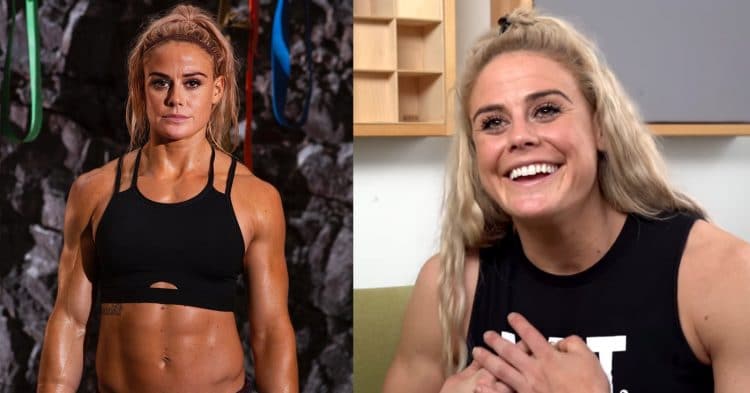 Iceland’s Sara Sigmundsdottir, a three-time CrossFit Open worldwide winner has had two years of back-to-back knee problems, and it’s been devastating for her. She recently told WIT that she is “98 percent sure” she will be a better athlete after her most recent injury. In a new interview and video, taken shortly after the injury, she opened up about the pain her heartfelt with this year’s setback.

The CrossFit fan world was just as hurt for Sara Sigmundsdottir when she left last year’s CrossFit Open early after a knee infection. The same tears were shed this year after she ruptured her ACL.

Sara described in detail how the injury happened.

I had one set left and I was so motivated. It was two days before the Open. I was just like, ahh, everything is clicking at the right time. Then I was jumping back in a split jerk and my friend is filming me. He just looks at me and is like “What, why did you drop it?” I was just like, something clicked in my knee and it was pretty uncomfortable.

He stopped filming and asked ‘how serious is it?’ I was like, it’s not serious at all. It was just a small click. Always when something happens you start testing stuff around to see how serious it is. So I was like, can I extend. And I could extend, but my knee was so wobbly.

I don’t know why, but my first reaction was, Can I jump back into a burpee? I just wanted to see how it would be. Because it was so unstable. So I was like, if I’m jumping then it has to be even more stable. I just went slow but I could feel that the knee was just so loose. So I contacted a doctor and I contacted a masseuse.

Sara talked about how the knee began swelling immediately. She saw a masseuse that night to try and get the swelling down. She took some anti-inflammatories and saw the doctor the next day. When her doctor came by the next day, he knew immediately that it was a torn ACL. She was shocked, “I just felt that sting in my heart because I knew it was something serious.”

She even explained being in denial which is to be expected especially as a top-level competitor preparing for the upcoming season.

Once the news set in, Sara says she was then determined to see the positive in it. She wanted to know what she could do to be ready for her surgery.

The CrossFit veteran is now waiting for knee surgery on April 12. Sara is a three-time CrossFit Open global winner, and the news was devastating for her, and her supporters.

Where most patients are expecting physio and rehab after-the-fact, Sara is in full physio training mode to prepare for the surgery, and what’s to come after that.

How is Sara Sigmundsdottir Training Now?

Sara is already involved in heavy rehab training prior to her surgery in just a few weeks. She says she sees herself as a goal-setter, and made targets for herself prior to surgery. She is looking at life one month at a time.

Sara also knows how important her mindset is. She was crushed when she injured herself this year. But now, she refuses to see 2021 as a bad year. She’s even determined to hit the box jumps again, the dreaded workout that landed her in the position of ACL surgery.

She’s also determined not to feel like a victim about it all, though she admitted she was a little human about that at one point.

I have my sponsors. I have fans. I have my family. How I think about it is that all of them live in this through me. And now I have done something so they can’t experience this with me. I have already decided that this is just going to make me even more motivated to have the most epic comeback in the CrossFit story.

This is my motivation so as soon as I am negative and I am feeling sorry for myself and feeling like I’m such a victim and asking why does this always happen to me. Then I’m just like, this happened to me and I am actually capable of dealing with it in the right way. And I am going to use this to be even more stronger in my game.

Related: Sara Sigmundsdottir: Her Transformation Before and After CrossFit

Sara says not competing for a year could be even better for her body. But, she also says, this entire experience has made her realize how much she wants to be the Fittest Woman on Earth. It’s an admission that not many at the top make.

It also makes me so hungry to be the athlete. Because I’m like, this mattered this much to me. This is the reason why I am doing this.  I have had that dream of being The Fittest Woman on Earth. Getting the leader shirt it was so unreal. And something started here in my heart. Just like, I really want to be the Fittest on Earth. And I can actually be it.

My body is capable of doing it. This is still my goal and this is still what I am living for now. I am going to do everything that I can to be there one day. I have always believed that if you don’t give up. If you just keep on going no matter how freaking hard it is.

You are going to get what you deserve. And I am 100% sure, 98% sure that I will be a better athlete after this injury… I am more hungry than ever.

Her hunger is palpable. If she can come back from this and win the title in the next season, it could well be the biggest comeback story in CrossFit history. She’s hungry for it, and alongside her training goals, that may be her biggest asset to date.