Sara Sigmundsdottir Ruptures ACL; Will Not Compete at 2021 CrossFit Games

One of CrossFit's elite women's competitors will not finish out the 2021 season due to a knee injury during training. 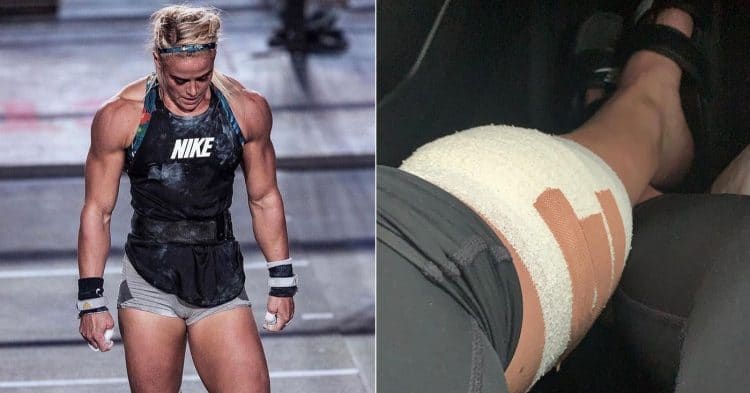 Six-time CrossFit Games athlete Sara Sigmundsdottir is a crowd favorite every year at the CrossFit Games. She’s an elite competitor on the women’s side and you can always expect her near the top of the leaderboard. However, that won’t be the case this year after the 28-year-old Games veteran injured her knee during a recent training session.
A very disheartening situation for Iceland’s Sigmundsdottir, especially with the 2021 CrossFit season kicking off and the Open underway.
She took to Instagram to share what happened this past week, calling it her “biggest nightmare”. You can read the full post below:

“I experienced my biggest nightmare earlier this week when I hurt my knee in training. I felt a click in my knee during a split jerk and went straight to get an MRI scan. The results showed a ruptured ACL.

I am still realizing that this has actually happened and that I won’t be taking part in the 2021 CrossFit Games season. This recovery process requires imminent surgery and then months of rehabilitation. When the timeline becomes clearer I’ll share an update on what that looks like.

Im so thankful for the support I have received from my team and sponsors. Then of course from all of you who have supported me through thick and thin and have been my biggest motivation since I started in the sport. Knowing that this type of injury can be healed 100% gives me every reason to be positive and the hunger to make the strongest comeback is already there.

This is my challenge now. Challenge accepted“

Luckily, this is an injury that she’ll be able to bounce back from but her ruptured ACL will take time to heal after surgery as she explained.

The two-time CrossFit Games podium finisher suffered a knee infection last year that affected her 2020 CrossFit Games performance. As a result, she finished in 21st place and missed out on the finals.

It’s apparent that luck has not been on her side, especially since she has had to deal with other health concerns as well that have affected her performance.

This isn’t the first time Sara has had to withdraw from Games due to injury. Back in 2018, the Icelandic star was unable to compete in that year’s Games after suffering a rib injury.

Sigmundsdottir won the Open last year and just assigned a new coach before the 2021 Open, in hopes of making “dramatic changes” to her training and preparation for the annual Games.

This injury put a damper on her progress but we wish her a successful surgery and speedy recovery.

Be sure to check back for updates on the 2021 CrossFit Open currently in progress.

The 12 Best Squat Variations for Hypertrophy and Strength

The reigning CrossFit Games champion Justin Medeiros, finally got all the components of his gym set up and is ready...

Sara Sigmundsdottir and Willy Georges are two of the 14 athletes confirmed to participate in the Dubai CrossFit Championship 2021....

A week before the competition, Crossfit Games notified Brazilian athlete Larissa Cunha that her invite for the 2021 Crossfit games...