Discover what it takes for action star Scott Adkins to maintain his lean, muscular body with our complete breakdown of his training and diet plan. 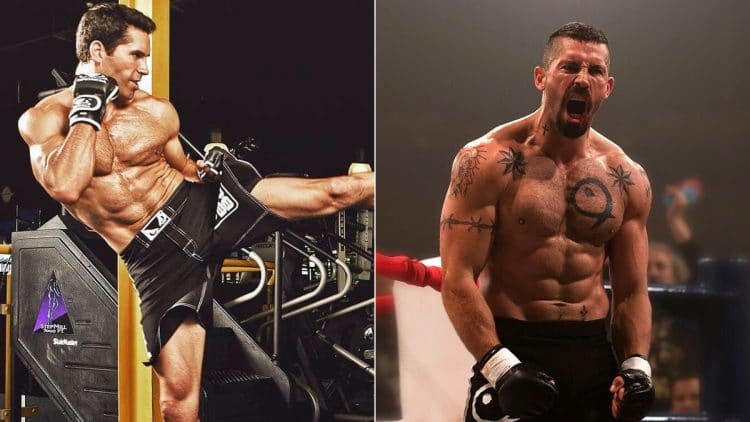 Scott Adkins is one of those rare action stars who actually knows how to fight – and has the body to look the part. Adkins is a proponent of a range of martial arts, including judo, karate, jiu jitsu, kickboxing, krav maga, ninjutsu, and muay thai. As well as his advanced fighting skills, he’s known for his ripped, muscular physique.

To develop both his fighting skill and his body, Scott has dedicated himself to a life of working out and strategically using nutrition to meet his goals. In this article, we go all in to uncover the Scott Adkins workout and diet program.

Scott Edward Atkins was born on June 17th, 1976 in Birmingham, England. His father worked as a butcher. At the age of 10, Scott caught the martial arts bug after going to a local judo club with his father. Three years later, he was robbed, an episode that further fueled his desire to be able to defend himself. He subsequently began training in Tae Kwon Do.

At age 16, Scott began training in kickboxing. He went on to become a kickboxing instructor with the British Professional Karate Association. Over the years, he also trained in a wide range of martial arts and in gymnastics.

Scott got his first acting break when he was offered a role in a Hong Kong martial arts movie in 2001. The movie was called (in English) Extreme Challenge. While filming in Asia, Scott got to meet and work alongside some of the best martial arts stars in the world, including Sammo Hung and Jackie Chan.

Returning to England, Scott landed roles in a couple of BBC TV series, including the popular soap Eastenders. In 2003, he got the lead role in a TV drama called Mile High. Then, in 2006, he became a regular on the BBC series Holby City.

Scott’s breakthrough movie role came with 2006’s Undisputed II: Last Man Standing. His portrayal of Russian MMA fighter Boyka launched him into the mainstream. In 2007 he had a supporting role in The Bourne Ultimatum. The following year he was cast as the main antagonist of Jean-Claude Van Damme in The Shepherd: Border Patrol.

In 2020, Adkins played the title role in Max Head. He released two further movies in 2021 and has numerous projects set to hit theaters this year and into 2023.

Scott is married to Lisa Adkins. The couple has a daughter named Carmel.

One of Scott’s heroes and a major influence in his acting career is Bruce Lee. Scott was naturally engrossed by Bruce’s martial arts skills and on camera charisma. But he was also entranced with Bruce’s ultra ripped physique, especially in Enter the Dragon. In order to try to bring a Bruce Lee like physique to the screen, Adkins knows that he needs to be on top of his nutrition every single day.

Adkins minimizes his carb intake in order to force his body to rely on stored body fat for energy. He will eat most of his carbs in the morning around the time that he does his workouts. After lunch, he will eat very few carbs.

In an interview with Men’s Fitness magazine, Adkins commented …

I find that if I cut out carbs from after lunch and I’m just having vegetables and some protein for the rest of the day, the weight just drops off me. It’s as simple as that.’

When it comes to protein, Scott aims to consume 1 gram per pound of body weight per day. At his standard weight of 176 pounds, that means he’s taking in around 170-180 grams of protein per day. His preferred protein sources are fish, eggs, protein shakes, and chicken breast.

Scott likes to down a protein shake after his workout. That post-workout shake includes about 30 grams of fast digesting carbs in order to refuel his muscle cell glycogen levels.

Scott typically eats 4- 5 meals per day, spaced around 3.5 hours apart. He will evenly divide his protein consumption amongst those meals. That means that each meal, he will be consuming between 35-44 grams of protein.

Here is a typical day of eating for Scott Adkins …

Scott places a huge emphasis on natural, whole foods. He also eats a lot of fruit and vegetables. Hydration is also important to Scott. He drinks the equivalent of 2 gallons of water each day.

If Scott feels that he needs to get leaner, he will cut carbs completely in order to force the body to use stored body fat rather than glucose for energy. He will also occasionally switch to an intermittent fasting protocol to further fast track fat loss. In these cases, he will train in a fasted state.

The key to Scott’s ability to maintain a lean, fat free physique is that he eats clean all year round. Unlike many actors, he doesn’t allow himself to eat whatever he feels like year round and then go on a super strict diet for the 3 months before a movie shoot starts. This man truly lives a health and fitness lifestyle, including his nutrition habits day in and day out.

Scott’s adherence to a junk free, clean eating pattern means that he is in movie shape year round, making him a more attractive proposition than those guys who blimp out when they don’t have a movie role to aim for.

Scott has not given out many details about the supplements that he takes. Our research, however, has revealed that he does take the following …

Scott Adkins loves the old school bodybuilding style workouts, That’s how he built his base of muscle mass, and it’s how he maintains it now. That’s why good old fashioned weight training, involving the compound mass builders, feature heavily in his program.

Here’s what Scott recently said about his workouts …

I like volume training, simple weight training. I mean, who doesn’t like the bench press? I always make sure to go in the gym and train intensely. We’re in there five or six days per week and I train hard. I put a lot into it. I make sure that I work myself all the way. That’s what you’ve got to do.

I’m training about five to six times a week. Three of those days will be in the gym with weights. Two of those days will be cardio—I’m not a big fan of the running machine or running in general. I get it done, but I’d rather do some martial arts-type training. Depending on the part I’m training for, if I need to be bigger, I just train five times a week with the weights and mix it up.

In addition to his weight training program, Scott also incorporates the following types of training into his program …

Scott naturally spends a lot of time training to perfect his martial arts skills. At the same time, however, he trains with weights in order to maintain his muscle mass. His weight training routine follows a split routine over a six day period. Here’s what it looks like …

Here is a breakdown of Scott’s weight training workouts …

Note: On the sets where the reps decrease, Scott increases the weight on each succeeding set.

Scott makes extensive use of cardio / MMA workouts to optimize his cardiovascular fitness and get as ripped as he possibly can. He does these workouts on Tuesdays and Thursdays, which are his light weight training days.

Here’s how the workout breaks down …

High Intensity Interval Training involves short intense bursts of work followed by even shorter low intensity workouts and then repeated for a number of rounds. Scott likes to use kettlebells for his HIIT Cardio sessions.

This sequence is repeated for 20 minutes. Scott’s goal is to maintain the same intensity of kettlebell swings right through to the 20th minute.

On the treadmill, Scott also moves between high and medium intensity workouts for repeat bouts. He starts with a one minute 10 mph sprint, then slows it down for a one minute walk at 3 mph. This is repeated for 12 minutes.

On the stationary bike, Scott follows a similar pattern to his time on the treadmill. He will sprint at more than 100 rpms at level 10 for 60 seconds, he then slows it down to level 3 for the next 60 seconds. This pattern is repeated until 12 minutes is up.

Scott finishes his cardio sessions with 20 minutes of steady state cardio. This will gradually bring his heart rate back to normal while also increasing his fat burn.

Scott Adkins is the real deal. He’s worked his butt off to achieve the type of impressive lean, muscular physique you see on film. And he’s got the real world martial arts skills to make sure that there’s never a stuntman in sight when he unleashes on screen.

In this article, we’ve shone a spotlight on how Scott Adkins trains and eats to maintain his amazing physical condition. Take Scott Adkins’ training and nutrition training program as inspiration as you create your own action physique.

Pea Protein vs. Whey Protein – Which One is Better