The 2014 and 2020 Hall of Fame inductee Scott Hall will be taken off life support following three major heart attacks. 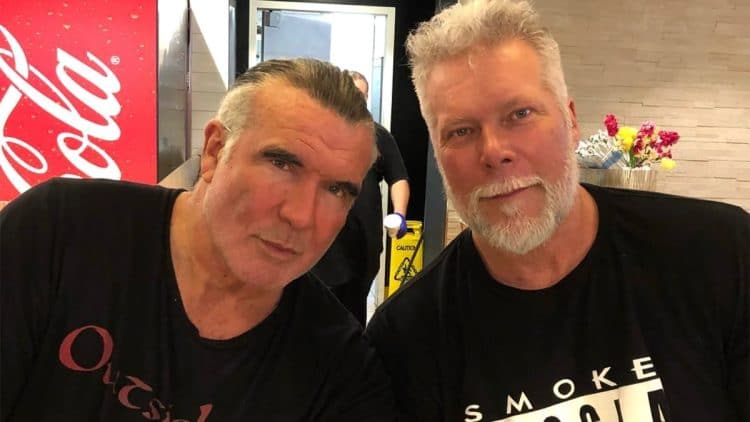 Kevin Nash and Scott Hall (via Razor Ramon on Instagram)

The hip replacement operation, which left Scott Hall with three heart attacks, came on Saturday. Shortly after the surgery, complications arose which forced doctors to put Hall on life support. Hall is 63 years old and went to the hospital to repair his hip after injuring it during a fall. It should be noted that Hall has suffered from cardiac issues in the past which caused the popular wrestler to have a defibrillator and pacemaker implanted in his chest.

Inducted into the Hall of Fame twice (2014 and 2020), Scott Hall is a prolific figure in professional wrestling. Hall was even scheduled to appear in Dallas during WrestleMania this week. His close friend, Kevin Nash, explained that Hall’s family planned to discontinue life support and issued a heartfelt tribute post on social media.

In an Instagram post published on Kevin Nash’s page, the NWO wrestler discusses the impact that Scott Hall had on him throughout both of their storied careers.

“Scott’s on life support. Once his family is in place they will discontinue life support. I’m going to lose the one person on this planet I’ve spent more of my life with than anyone else. My heart is broken and I’m so very fucking sad. I love Scott with all my heart but now I have to prepare my life without him in the present.

I’ve been blessed to have a friend that took me at face value and I him. When we jumped to WCW we didn’t care who liked or hated us. We had each other and with the smooth Barry Bloom we changed wrestling both in content and pay for those…… alot that disliked us.

We were the “Outsiders ” but we had each other. Scott always felt he wasn’t worthy of the afterlife. Well God please have some gold plated toothpicks for my brother. My life was enriched with his take on life. He wasn’t perfect but as he always said “The last perfect person to walk the planet they nailed to a cross ” As we prepare for life without him just remember there goes a great guy you ain’t going to see another one like him again. See Ya down the road Scott. I couldn’t love a human being any more than I do you” Kevin Nash shared Monday.

Scott and Kevin had a close relationship and bonded throughout their wrestling careers. In 1996, both athletes took a big risk by opting to make the move from WWE to WCW, a rival wrestling organization.

Residing at Wellstar Kennestone Hospital in Marietta, Ga., Scott will be taken off life support by his family. Following an operation-gone-wrong, Hall may soon leave this world but will always be remembered as a pioneer of wrestling and a positive role model.

Fitness Volt wishes Scott Hall’s family and loved ones our most heartfelt condolences.