Joey Swoll addresses 'Toxic Gym Culture' in his latest TikTok video condemning a man for showing off instead of helping someone struggling at the gym. 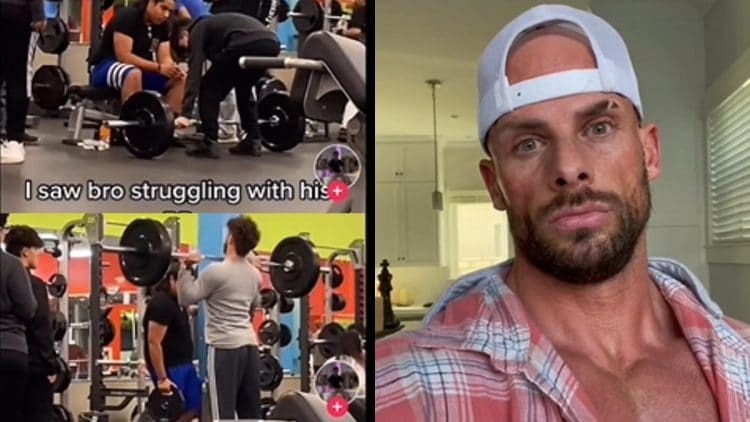 In a recent video published on TikTok, Joey Swoll addresses toxic gym culture. Looking to improve gym etiquette, Swoll condemned an ego lifter and believes he should have focused on helping instead of flexing.

Fitness influencer Joey Swoll has been in the headlines lately after calling out toxic gym culture. He believes people need to focus on helping others instead of creating content to garner likes and attention.

Last week, Swoll zoned in on the problems that arise with recording people inside the gym. In particular, a female TikToker took to the streaming platform and made fun of a fellow gym-goer for doing ‘half ass reps’. As it turned out, Swoll revealed that the man being made fun of was doing an exercise called partials, which are great for bicep development.

In the latest TikTok clip, an ego lifter made light of a gym-goer struggling to break his personal record while powerlifting. Ego lifting in large part is when someone lifts more weight than they should, and they often care more about the amount of weight being used versus actual contractions and proper form.

Joey Swoll: “Being Bigger Or Stronger Than Others Do NOT Make You Better”

To clean up negativity at the gym, Joey Swoll addresses the ego lifter and believes there are better ways to help someone struggling at the gym.

“One of the things that upsets me most in the gym is people thinking they’re better than others simply because they’re bigger or stronger, you’re not. Just because you can lift more, doesn’t give you the right to treat people poorly.

I hope this gym sees this and revokes your membership or makes you apologize to this young man. He’s working hard, he’s got his friends there pushing him, they’re encouraging him.

You saw an opportunity to shame him and embarrass him for likes and attention on social media. This is toxic gym culture. You could have done two things, you could have gone over, helped him, encouraged him, and helped him with form or, you could have simply minded your own business. Be better than that.” Joey Swoll shared.

Being bigger or stronger than others does NOT make you better. #MYOB

The video caption displayed on Swoll’s TikTok snippet reads, “I saw bro struggling with his PR”, so I asked if I could hop in, so I had to start pressing”. Swoll believes the man’s actions were a byproduct of arrogance and pointed to this type of behavior being the problem with gym culture today.

Swoll suggests the man should have offered a helping hand instead of taking the opportunity to show off his strength. These problematic gym interactions have become a common occurrence in fitness. A few months ago, TikTok star Nicki Fitness mocked a man for doing drag curl exercises without realizing it’s a legitimate technique in bodybuilding. Swoll enlightened Nicki who has since apologized and explained that drag curls take stress off the deltoid and enable the bicep to get a bigger pump.

Toxic gym culture is prevalent at many local gyms and Swoll is spreading awareness around the topic to help victims who have become the butt of an online joke. With a desire to improve gym etiquette in the age of social media, Swoll underlines that people are too fixated on likes and attention instead of helping others.