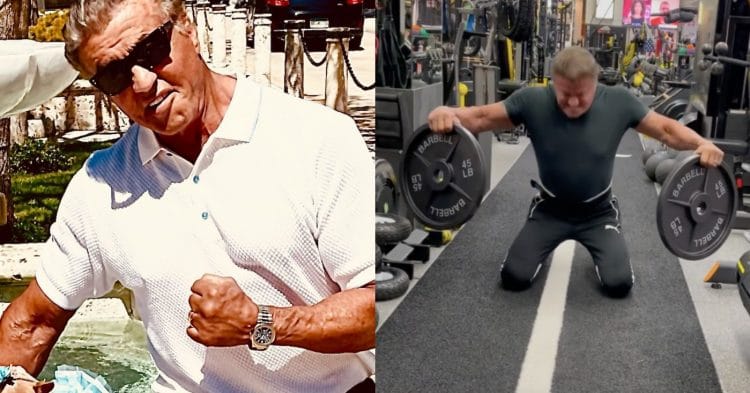 Sylvester Stallone is a beloved figure in Hollywood, as well as the world of fitness. However his legitimacy is being called into question by some who believe he was recently caught using fake weights.

Over the years, Stallone has built his reputation on being one of Hollywood’s tough guys. He even had a rivalry with Arnold Schwarzenegger in the 80’s that saw the two compete for the top spot as Hollywood’s biggest action stars.

Even well into his seventies, Sly has kept a phenomenal physique, again akin to his old rival Schwarzenegger. At 74 years old, he has boasted a physique that is solid enough to make a lot of fans jealous of the way he looks.

However a recent situation emerged that put Sylvester Stallone and his credibility as a fitness icon up for debate. It all started with a video that he posted to his Instagram, doing a brief strength challenge.

There is little context to the video, but in it you can see Sylvester holding what appears to be 45lb plates in each hand, while standing up from his knees. The way these weights look have gotten several fans to question if the plates were real, or if he were using fake weights.

To be clear, like previously stated, there is no context provided with this video. So there is no indiction that this was a serious performance, or if he were just pretending that the weight was so heavy.

However many fans have pointed out the resemblance between the weights that Stallone using, and those that are purchased at sites such as FakeWeights.com. These types of weights look real at firs, but upon closer inspection you can see that they do not quite look like real 45lb plates.

The fact of the matter is, if Sylvester Stallone wants to use fake weights for an Instagram post at 74 years old, there is nothing wrong with that. He is not trying to say that he is lifting something incredible, and he even hints that he is using fake weights in the caption of the post.

Regardless of what the truth is behind this one post, the truth still remains that Sly is still in unbelievable shape for his age. Fake or not, he could almost certainly still out-lift a ton of people that are a third of his age.