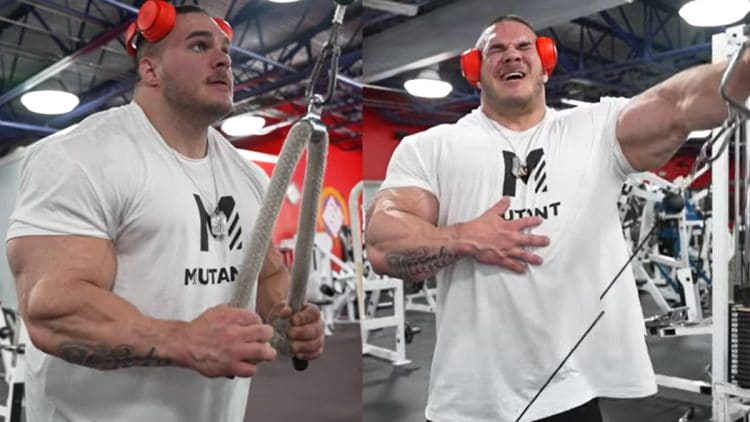 2021 Arnold Classic winner Nick Walker recently shared shoulders and triceps workout. Walker is an IFBB Open Pro competitor and many experts believe that he has the potential to win the Mr. Olympia crown in future. After a strong start to his professional bodybuilding career with wins at the 2021 Arnold Classic and 2021 New York Pro, Walker finished in the top five at his very first Olympia appearance in 2021. He was expected to defend the Arnold Classic title in 2022. However, he decided to take an extended break from competition and prepare his body to compete against the most elite competitors that the Open Pro division has to offer.

Nick Walker has kept his fans and the bodybuilding community updated with his off-season training schedule and progress with an active social media presence. His off-season training is picking the pace up after a de-load week. The 27-year-old recently shared his shoulders and triceps workout on his YouTube channel and here is the summary of the entire session.

Nick Walker feels that the rear delts are the most neglected muscles when it comes to shoulders. Therefore he starts the shoulder workout with reverse delt movements without fail.

“I feel like these are what really add to the depth of the shoulder. So I always like to start with the rear delt,” Nick Walker said.

He then follows up the reverse delt movement with pressing and side raises. For this particular session, Nick Walker did not have a set game plan as far as sets and reps go. Instead, he went through the entire workout based on how he felt performing them.

Nick Walker started the workout with reverse pec deck flys. The reverse delts, rhomboid, and trapezius muscles all work together to pull the arms and shoulder blades back in line or slightly behind the body. As a result, the machine is extremely helpful in building the upper back and rear delts.

Nick Walker performed 1 failure set, 1 double drop set with 20 partial reps in the second drop, and moved on to the next workout.

Shoulder press targets the deltoids as well as the pecs and upper back. Seated shoulder press eliminates the core activation as the back is pressed against the pad. Therefore triceps and deltoids (shoulders) do all the work.

Doing this movement on the Smith Machine also eliminates the need to control the weight as they move along a single axis. It is not the case with a regular free-weight barbell. Therefore the chances of injury significantly reduce with the Smith Machine and the individual is able to isolate the target muscles to a far greater degree.

This workout targets the side and rear delts. At the same time, it increases the strength of entire shoulder region while improving core stability. Nick Walker increased the rep volume for the seated dumbbell side lateral raises and performed 3 sets of 12 reps with 30lbs dumbbells. However, he took shorter rest periods between the sets.

One arm side lateral cable raises

Nick Walker does not incorporate a lot of pressing movements in his shoulder routines as he feels that he has big enough shoulders. Therefore his focus is on adding the finer details and activating difficult muscles in the shoulder region with other movements. The one-arm side lateral cable raise is an isolation exercise for the lateral (Outer) head of the shoulders. It’s a very effective movement for developing roundness and wideness in the deltoids.

Nick Walker performed 2 failure sets of 15 reps each, holding the position for a second or two to get a good squeeze in the muscles.

Nick Walker next performed one of late John Meadow’s favorite virtual exercises – the reverse dumbbell flys. ‘Mutant’ performed a working set of reverse dumbbell flys and followed it up with a drop set with 30lbs dumbbells. This workout served as the finisher for shoulder workout as Walker turned his attention to triceps after this.

Nick Walker started the triceps workout with a few working sets of rope push-down. It is considered as one of the best movements to warm up the triceps. In addition to this, rope pull-downs also warm up the elbows and open them up. Since the elbow joint is crucial in most arm movements, warming it up is very important before getting into an intense arms workout. Walker performed 2 sets of this workout and the second set was a drop set with a single drop.

Overhead extensions stretch the triceps to their greatest length. The triceps muscles attach near the shoulders at the upper end and near the elbow joint at the lower end. Therefore, when the weight is at its lowest point, the triceps get fully stretched during overhead triceps extension. Again, performing this movement on the machine significantly reduces the chances of injury and Nick Walker stated that he prefers to perform this movement on the machine more than with dumbbells or barbells.

Nick Walker performed two sets of this workout. The second set was a double drop set. During the second drop, Walker held the weight in the lowered position for a second or two before lifting them back up.

Nick Walker believes that arms respond better with moderate weights and higher rep range. He reiterated this belief before starting this movement and said:

“You don’t need to go crazy heavy with these. You want to mainly get a good squeeze… Good stretch and squeeze. That’s all you need for these.”

Nick Walker performed 2 working sets of cross-body cable push-down and this movement served as the finisher for the triceps workout.

Nick Walker incorporated abs movement in his shoulder and triceps workout and capped the day with three sets of hanging knee raises.