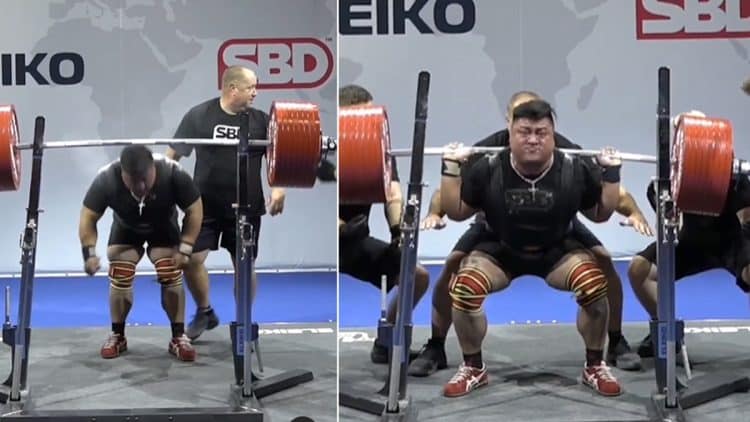 The 2022 IPF World Equipped Open Powerlifting Championships, which took place from November 14-20, in Viborg, Denmark, featured numerous performances that broke records. So, it is hard to pick out the best ones. However, Sen Yang definitely earned his place on this list due to his incredible performance in the squat event. Sen took part in the equipped 120-kilogram weight class and managed to squat 440.5 kilograms (971.1 pounds) for a new IPF Equipped Squat World Record.

The full results for this competition are not yet official, so it isn’t clear where Sen Yang placed in his weight class. However, it is official that Sen broke the Equipped Squat IPF World Record. Furthermore, Sen Yang got very close to becoming the first person in the equipped 120-kilogram weight class to squat 1,000 pounds.

Sen Yang bested the previous IPF World Record by 0.5 kilograms (1.1 pounds), as it was also in his possession previously. Sen set that previous record of 440 kilograms (970 pounds) at the 2022 IPF World Games.

In addition to setting the 440.5-kilogram (971.1-pound) World Record, Sen Yang also displayed extreme humility by bowing to his spotters and the audience.

Sen Yang has built quite a reputation for himself, especially in recent years. Having made his debut in 2010, Sen is also one of the more experienced athletes in the IPF. In addition, as he represents Chinese Taipei, Sen Yang has also won eight AsianPF continental championships.

Overall, Sen Yang has taken part in 21 sanctioned competitions prior to the 2022 IPF World Equipped Open Powerlifting Championships. Of those, Sen managed to gain eight wins and a bundle of podiums. However, the most exciting fact is that Sen has shown steady and constant progress throughout his entire career.

*This segment will be updated once the full results for the recent IPF World’s come out. that is if Sen Yang managed to claim more PRs.

It is not clear if Sen Yang will compete again this year, but this was his second appearance this year. Having set a new World Record, Sen may be motivated to attempt to set many more in the future.