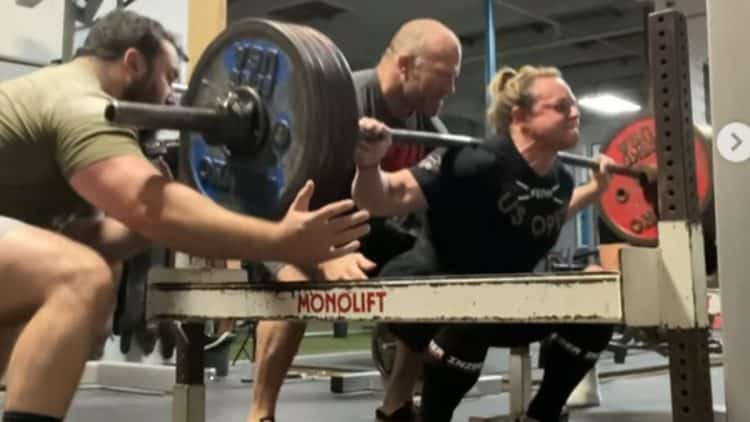 Kristy Hawkins is known as arguably the pound-for-pound greatest female squatter in the history of powerlifting. However, she has recently been on quite a squat journey, which saw her slowly get even better and claim numerous rep PRs. It all culminated now, as Kristy decided to load an unofficial All-Time World Record on the bar, which saw her successfully squat 272.5 kilograms (600.8 pounds).

Kristy Hawkins did not disclose her bodyweight during the lift. However, this would be an Unofficial World Record in the 75-kilogram weight class where she competes exclusively. Kristy is also the official record holder, having squatted 262.5 kilograms (578.7 pounds) at the 2021 WRPF The Bucked Up Showdown. While her recent 272.5-kilogram (600.8-pound) squat is an unofficial record in the U75KG weight class, it is also heavier than the World Records in the U82.5KG and U90KG weight classes.

In spite of the fact that Kristy Hawkins had a bit of a struggle on the day, she was able to complete the lift in an elegant manner. As she only used a lifting belt and knee sleeves, her lift is also characterized as raw.

Kristy Hawkins did not initially plan to squat 272.5 kilograms (600.8 pounds), but decided to attempt it after scoring a new 265-kilogram (584.2-pound) squat two-rep PR in the same training session.

Kristy Hawkins seems to be in competition shape and it seems that she will be taking part in the 2022 WRPF Professional Powerlifting Championship (PPC) Finals, which are set to take place on December 4th, in Harbor City, LA.

Kristy Hawkins has appeared in 20 sanctioned competitions and won 15 of them so far. Apart from setting numerous World Records during her 8-year-long career, Kristy Hawkins also scored the greatest DOTS score (671.95) in the history of both the men’s and women’s raw divisions. This practically means that she is the pound-for-pound greatest raw powerlifter. Hawkins has also been a professional IFBB bodybuilder, but now she is exclusively focusing on powerlifting.

Only four women have squatted 272.5 kilograms (600.8 pounds) or more in a raw powerlifting competition, and all of them were significantly heavier than Kristy Hawkins. So, if she is able to repeat this squat in a sanctioned competition, she will set a record in the U75KG weight class that won’t be moved for a very long time.