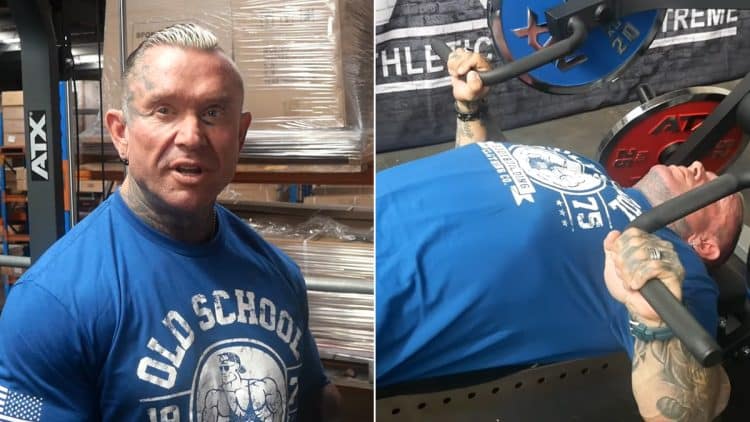 Australia’s Lee Priest has acquired a wealth of knowledge throughout his illustrious bodybuilding career. In a recent demonstration, Priest broke down how to safely use decline bench presses to maximize chest development.

During his tenure, Priest established himself as a perennial threat with impressive muscularity, conditioning, and willpower. He managed to build a tremendous physique even at an early age. In fact, bodybuilding icon Jay Cutler said he was blown away when he saw Lee Priest at 21 years old. Despite being outsized at a number of contests, Priest found success and pushed a number of Olympia champions during his prime like Ronnie Coleman and Dexter Jackson.

In addition to transforming his physique recently, Priest routinely shares his takes on current bodybuilding events. Earlier this month, Priest again reflected on some of the cycles he’s used while competing. According to the veteran, his diet helped him maintain muscle mass through the years, and doesn’t believe coming off steroids affected his overall size.

The decline press is primarily used to strengthen the lower pectoralis muscles of the chest. It does so more effectively than presses conducted at an inclined angle. Thus, it is a valuable exercise for lifters seeking to develop their chest and overall press strength.

Even though the classic chest press works, other varieties, like the decline bench press, stimulate the chest muscles in different ways. Plus, by changing your press angle, you can decrease stress on your shoulders, wrists, and elbows. For people whose joints are too sensitive to flat or incline press, the decline press is an excellent alternative.

In Priest’s latest endeavor, he is discussing how to safely practice decline bench presses. Furthermore, Priest broke down how to perform them like a bodybuilder without sustaining pec tears.

To start off, Priest discussed whether decline bench presses can help with ‘man boobs.’

“No. They can build chest muscles and that but if you got man boobs it would be more to do with your diet. I’ve been heavy where I have the chest, the muscles under the fat. So, once you put fluid and fat over the top of the chest muscle you get the man boobs or the piece of skin that runs across here.

Like I said, you can build a good chest doing it [decline bench press] but if you have man boobs that’s got more to do with your dieting than exercising,” Lee Priest said. “Some gyms don’t even have decline anymore. They just have it on a decline.”

When performing the exercise, Lee cautioned lifters that the decline portion of the movement can get heavier and cause injuries.

“And be careful, a lot of people tear their pecs on decline because sometimes it can get heavier because when you bring the bar down if you’re on a barbell, you’re bringing it to here almost — your sternum. Sometimes people can go heavier and tear their pec.”

While performing reps, Priest recommends not going ‘too steep’ on the angle with decline bench presses. He added that he has a preference for dumbbell variations of this exercise, but only when he has a training partner to spot him.

“If you have a training partner and do it with dumbbells it’s okay, but to do them by yourself with dumbbells because you have to go all the way back and flip off and putting them down is hard. Like I said, it takes a lot more stretch off your shoulders doing the incline and you get a really good squeeze.”

“I think flat would be harder. Decline I’ve always just felt more of a squeeze though. I think I just get a really good squeeze doing it because like I said, flat I feel my shoulders a lot more. Decline for some reason, maybe because of that angle, you’re coming to like here [points to chest] I just feel it in the chest more and those shoulders.”

Priest isn’t the only retired bodybuilding mainstay handing out bench press workout demonstrations. Four-time Mr. Olympia Jay Cutler broke down the differences between barbells and dumbbells for the bench press a few weeks ago. He prefers to stick with dumbbells, which he credits for helping him avoid injury.

While Priest has shot down a competitive return to bodybuilding, the community hasn’t forgotten what a potent force he was on stage. The 50-year-old was recently inducted into the iconic Muscle Beach Hall of Fame in Venice, California. After accepting the honor, Priest dedicated the achievement to the late Eddie Guiliani, who passed away at 87 in May.

Avoiding injury and safe lifting practices were keys to the consistency Priest enjoyed throughout his career. When it comes to building the lower pectorals, Priest believes decline bench presses are a valuable tool.