Coleman, who made a career out of hard work at the gym, is reacting to some of the craziest stunts and accidents ever recorded. 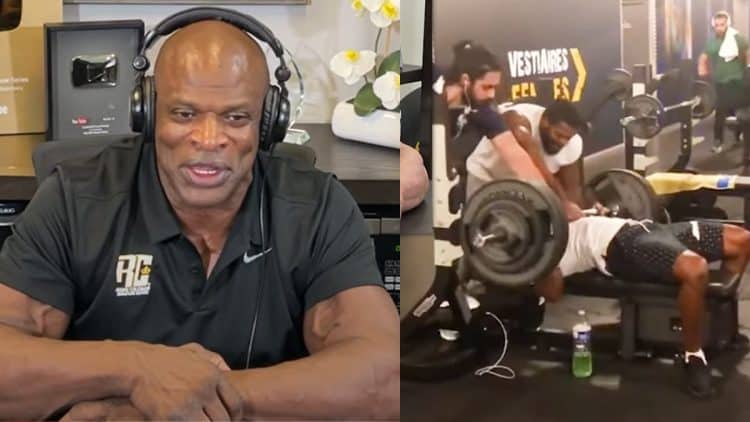 As an eight-time Mr. Olympia, Ronnie Coleman reached the top of the sport and maintained his status as the best in the world for eight years straight. Instead of rehashing his successful career, Coleman is reacting to some of the wildest gym stunts/accidents ever recorded.

“What’s going on guys Big Ron here. I’ve been getting a lot of requests for reactions to gym fails. So, let’s get into y’all. Yeah Buddy!” Ronnie Coleman said.

During his career, Coleman was recognized as one of the strongest bodybuilders in the IFBB. Even though he retired, Coleman’s legacy and work ethic are celebrated today. Despite struggling to walk without assistance, Coleman’s love for lifting weights and working out hasn’t gone anywhere.

Coleman doesn’t lift heavy weight like he used to, but the bodybuilding legend is known for reacting to some of the world’s nuttiest gym stunts, lifts, and accidents. In April, ‘The King’ gave his raw unfiltered take on fitness influencer Bradley Martyn’s mind-boggling feats of strength.

However, sometimes these gym stunts result in painful injuries. Bradley Martyn recently experienced this when one of his stunts went awry. A woman fell [shoes first] on his face while trying to lift her on a weight plate; he received 10 stitches in his mouth following the accident.

Continuing the tradition, Coleman is back on YouTube watching some painful gym encounters. You can check out most of his reactions below:

Ronnie Coleman Reacts to Gym Stunts: ‘Let’s Get Back to Lifting Light Weight Before Y’all Kill Yourselves’

In the first gym fail, Coleman watched a gym-goer attempt a snatch but was unable to move the barbell off his shoulders. He narrowly escaped catastrophic injuries judging by the accident.

“What was that. Damn. He’s trying to break his damn neck,” Coleman said.

In the next clip, Ronnie reacted to a man’s painful bench press experience. The gym-goer completed a couple of reps before a man walked over to spot him. However, the man decided not to spot him and instead pushed the weight into the lifter’s chest.

The next accident involved a deadlift. While the gym-goer managed to complete the lift, he ended up tripping over a bench rack behind him. Fortunately, the man wasn’t holding any weight at this point.

“Oh nooo. Watch out dude watch out! Too soon, you can’t celebrate [yet].”

Another accident saw a man fall backward on a row machine then another gym-goer fell on his face after attempting a box jump.

Next, Coleman watched a lifter without a spotter stuck on the bench press. He resorted to moving the weight down his legs to avoid further injury. The next few clips were similar, showing a number of men falling on their faces trapped under weight.

“Uh-oh you in trouble man. Somebody help him. Damn,” Coleman said.

“I think we learned a few things here. Number one we need some spotters. Number two we need some damn collars [for the weights] that lock. Number three, there is such a thing as heavy ass weight. Sometimes you can put way too much on there. Let’s get back to lifting light weight baby before ya’ll kill yourselves,” Coleman said.

The last time fans saw Coleman in a reaction video, he gave his thoughts on Jon Call or ‘Jujimufu’s’ craziest feats of strength. Even though the workout compilation was obscure, Coleman was impressed by Jujimufu’s strength and invited him over for a workout.

Before wrapping up, Coleman stressed the importance of spotters and lifting light weight. He may have retired from bodybuilding, but Ronnie’s passion for fitness is on display during each and every reaction video.