Sen Yang sets a historic record, as he is the first powerlifter to squat over the IPF World Standard in the last 11 years. 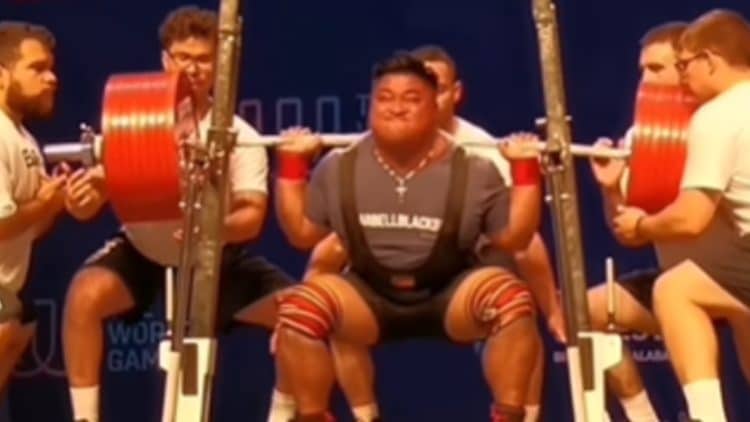 The 2022 World Games took place from July 7-10, 2022, in Birmingham, Alabama, and the powerlifting fans got to see some really impressive performances. Multiple world records have fallen, one of which was claimed by Sen Yang. He competed in the ‘Super Heavyweight” class and finished in second place, just behind Oleksii Bychkov. However, Yang set a new 440-kilogram (970-pound) Equipped IPF Squat World Record in the 120-kilogram weight class.

No one held this record before Sen Yang, as the IPF set the World Standard at 430 kilograms (948 pounds) in 2011. Orhan Bilican got the closest to the standard, having squatted 425 kilograms (937 pounds) at the 2013 IPF World Powerlifting Championships. So, Yang’s lift is also one for the history books, since no one has managed to set it in the past 11 years.

Sen Yang opened up his squat session with a successful 425-kilogram (937-pound) lift. He then immediately jumped up to 440 kilograms (970 pounds) for his second attempt but did not manage to lift it. However, he had one more attempt and made great use of it. Despite shaking a bit on his walk-out from the rack, Yang very smoothly squatted a new World Record.

Sen Yang weighed in at 114.8 kilograms (253 pounds) for the 2022 World Games. So, his lifts ranked in the under 120-kilogram weight class, which resulted in him breaking a World Record. Yang also claimed new competition PRs in every event.

The competitors at the 2022 World Games earned their placing through score, which they calculated by using the Total and bodyweight. So, there were some powerlifters to total more than Sen Yang, but his score turned out better because of his lighter bodyweight.

The 2022 World Games were Sen Yang’s 21st professional powerlifting appearance. He has been competing since 2010 and has come out victorious eight times. However, Yang only takes part in the most prestigious competitions, which are organized by IPF or AsianPF.

Despite just missing out on winning the show, Sen Yang definitely has a lot to be proud of after the 2022 World Games. He is now just 30 pounds (13.6 kilograms) short of becoming the first person in U120KG IPF history to squat 1,000 (453.6 kilograms). At the present moment, it is unclear what Yang’s plans for the future are, but we will certainly see some more demonstrations of his greatness to come.