This is a freakish feat from the very young Shane Nutt!

If you’ve followed powerlifting for a while now then you know a mind-blowing feat of strength never really seems to get old as athletes continue to raise the bar (pun intended).

Well, the latest super impressive lift came from 19-year-old college student Shane Nutt from Nebraska; who pulled a huge 347kg/765lbs at a bodyweight of 84kg/185lbs which is devastating news for his competition. Well, just last month he achieved a 317.5kg/700lb raw deadlift which is just mind-blowing in itself but to surpass this by 65 pounds a month later is out of this world, and even a bit “Nutt-y”.

But Shane Nutt’s super strength allowed him to dominate the 83kg weight class at the 2018 Raw Nationals with a 705.35kg total you can rest assured that there’s a lot more to come from the young fella.

Well, we know what you came here to see, so here it is…

Boy was he pumped afterward (must be that awesome pre-workout he takes) and it looked as he could have even pulled a little more too.

The lift was surely one of the more impressive ones we’ve come across and we’d all have to agree that the music made it even more badass. And at this rate, if Nutt continues to make big improvements consistently (not necessarily as big as this one in as short of a time frame), well… the powerlifting world better watch out because a 19-year-old with this much strength may shatter the definition of impossible.

And to get an idea of just how much he’s improved in a month’s time, check out his 700lb deadlift from November…

We will, of course, be sure to update you on Shane Nutt’s Progress as the 19-year-old college student continues to improve his lifts. 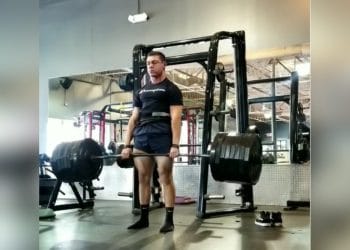 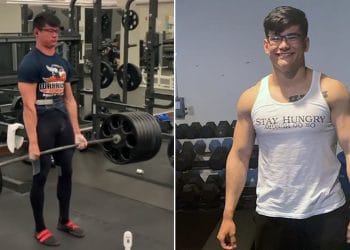