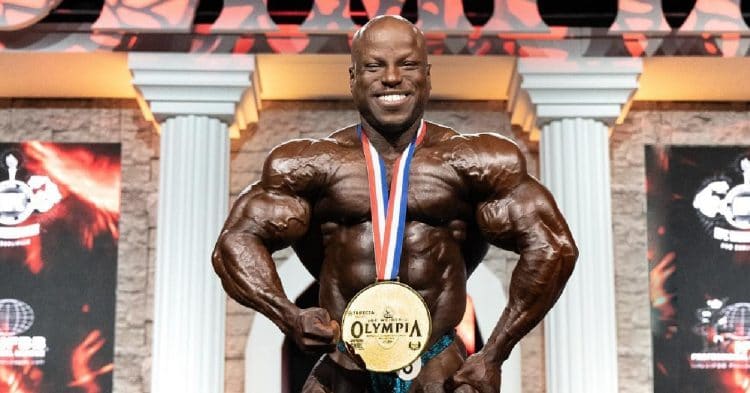 When Shaun Clarida took to the stage and won the 212 Olympia this year, he drew comparisons to bodybuilding legend Ronnie Coleman. Now he responds to these remarks, and is honored to compared to one of the greats.

For years, Clarida had been clawing his way through the ranks of the 212 Division. He was small for the division, and few thought he had what it took to be a champion.

Yet he could not be deterred, always coming back better than the year before. This paid off at the 2020 Mr. Olympia in a big way.

He looked his best yet, showing an even more dense physique. In the end, this would be enough to realize his dreams and win the 212 Olympia, dethroning champ Kamal Elgargni in the process.

When he took the stage, many people compared Shaun Clarida to 8x Mr. Olympia Ronnie Coleman, calling him the smaller version of the GOAT. Speaking in a recent interview, the champ says he appreciates these comparisons, but did not know how well he was doing.

“Honestly I thought I was somewhere in the top four,” Clarida said. “Just based on the callouts and just based upon how everything was going.

We knew it was close but I just didn’t know exactly where I was. Obviously everybody was coming up to you, certain people high up in the industry are telling me ‘You’re definitely in the mix tonight, just give back just as good if not better than you were this morning.”

Clarida explained that they went back to his hotel room where he rested and prepare for the night show. After a small meal and a nap, he was ready to go again.

“We knew it was going to be a battle so we were prepared for another round, as far as posing goes,” Clarida said. “Because I knew it was close, I knew Steve was going to work us, which he did.

That being said, by the end of the contest Shaun Clarida still did not expect to win. He knew how good Kamal looked, and figured the judges would go with the champ.

“Honestly when we were lined up, I really thought I was going to take second,” he said. “Just because I knew that Kamal was the champion.

He was very much improved from last year, it was very close and I figure hey, most of the time they are going to go with the champ, especially if he improved.

At that very moment I was ready for a second place spot but I’m sitting there, still hoping. Bob said ‘And new,’ that was it for me.”

It was definitely a good performance from Shaun Clarida. It will be interesting to see if he can continue to improve and have a long reign as 212 Champion.

Chad Nicholls Says Big Ramy Will Be Even Bigger In 2021