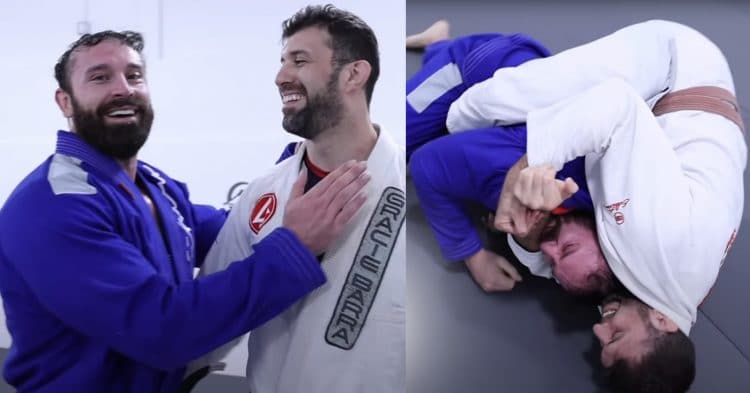 Brazilian Jiu-Jitsu became famous in the United States for being able to allow smaller opponents beat those who are bigger and stronger. Bradley Martyn wanted to test this theory by taking on a black belt.

Over the years, Martyn has made a name for himself in the fitness community for being a co-owner of Zoo Culture Gym. In fact this was the gym that he is getting sued for keeping open.

On the side, he also runs a YouTube channel, where he has amassed over 2.7 million subscribers. Here he puts his strength to the test by challenging himself to various tasks and training.

Recently though, Bradley Martyn decided he wanted to try a new type of challenge: Brazilian Jiu-Jitsu. The bodybuilder has done a bit of grappling before, but decided to return to the gym after 3 months.

The video, which he posted to YouTube, sees Bradley doing a variety of drills as the BJJ class commences. He learns takedowns and transitions, as well as grip work and submissions after being gifted his own gi.

At one point, they were drilling takedowns and trips, as Bradley took on a brown belt. His partner managed to pull guard, yanking Martyn on top of him, before using his legs to miraculously flip Bradley over his head.

The it was time for live rolling, where Martyn took on a black belt to put his knowledge to the test. It was not a full on heavy rolling session, but at one point Bradley was stuck in a triangle, and slammed his way out of it.

All in all, it seems that Bradley Martyn is pretty good at defense, getting complimented for escaping submissions. However he notes how hard the cardio is on him, getting gassed easily.

“Once he learns how to flow he’s going to be dangerous,” the coach said.

Next Bradley moves on to no gi BJJ, where he challenges the aforementioned brown belt. If Bradley can submit his training partner, he gets the competition trophy that the brown belt has.

Unfortunately this did not happen, as he got tapped to an arm-in guillotine. So Bradley switched partners, and was able to use coaching to sink in an arm triangle and mounted guillotine on his new opponent.

At the end of the session, everybody could not help but remark about how much Bradley Martyn had improved. It would be interesting to see him doing MMA one day, maybe even taking on another Martyn.