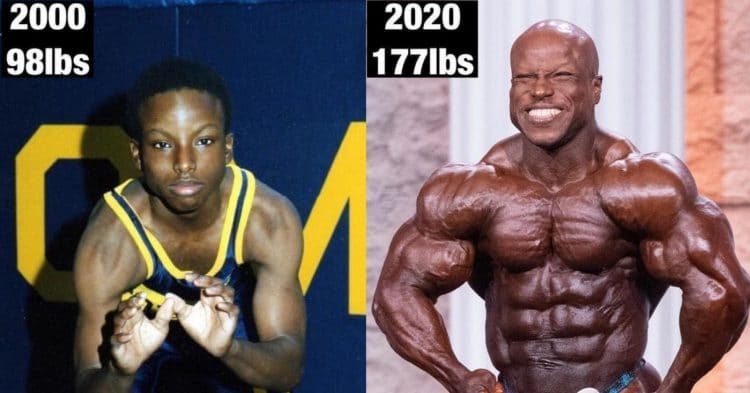 Over the years, Shaun Clarida has worked hard to build a physique that was worthy of being crowned the 212 Olympia champ. He recently reflected on that journey, and the changes he went through are incredible.

To put it frankly, nobody was really expecting to see Clarida win the Olympia last year. That is not to say he lacked the skills; he just had a tendency to be on the smaller end of the division, and that had caused him to score below the rest.

Nevertheless he kept persevering and improving his physique. This led to a third place win in 2019, before he returned in 2020 to completely defy the odds and win the Olympia, beating 2019 champ Kamal Elgargni in the process.

If there is one thing that has defined the career of Shaun Clarida, it is his strong work ethic. The 38 year old has been building his body up, year over year, and did not let any of the setbacks deter him from finding greatness.

Recently, he took a trip down memory lane to reflect on how far he has come. Taking to Instagram, he shared a side-by-side comparison of him as a high school wrestler, opposite him at the 2020 Olympia, while telling an emotional tale of his journey to this point.

“Wrestling room to the Olympia stage

My journey in this sport started right here in my high school wrestling room. I was a junior that was prepping to be the starter at the 103lb class the very next year and the coaches wanted me to get bigger and stronger to be ready,” Clarida wrote.

“Weight room was a requirement for both gym class and post wrestling practice, so being around the weights naturally grew on me but it wasn’t until college that I took it much more serious and learned about bodybuilding.

As a walk-on at a D1 wrestling school, Rider University, I had to work and earn my starting spot and found myself back in the gym training to one day be that starter for the 125lbs class (I was 110lbs then).

While doing this, I met a bodybuilder at the gym that introduced me to the sport and he helped me do my 1st show just 3 months later. I instantly fell in love with it, I quit the wrestling team and the rest is history!”

There is no doubt that it took a massive leap of faith for Shaun Clarida to quit the wrestling team and devote himself to bodybuilding. However it cannot be denied that this was the right decision for him.

To see him go from weighing less than a hundred pounds, to world champion sends an inspirational message to everyone watching. It may take years of hard work and dedication, but it is possible to achieve your goals, no matter what they are.

Read also: Shaun Clarida Plans On Bulking To 230lb During The Offseason To ‘Dominate’ The 212 Division

The 8 Most Common Squat Mistakes and How to Fix Them