After competing at the 212 Olympia, Shaun Clarida and Hadi Choopan share some poses side-by-side 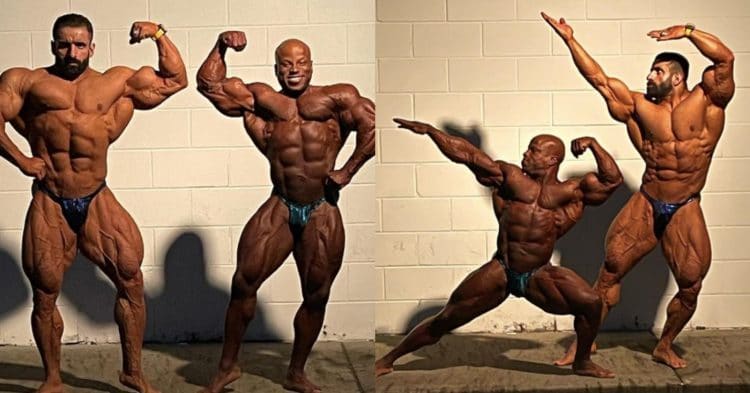 At the 2020 Mr. Olympia, which went down December 17-20th in Orlando, Florida, both Shaun Clarida and Hadi Choopan had different levels of success. Following the contest, they met up to do some posing together, and it was quite impressive to see.

While Choopan looked great en route to his fourth place win at the 2020 Olympia, there was no denying that Clarida was the bigger winner of the two over the weekend. The Giant Killer, Shaun competed in the 212 Division and looked better than he had ever been onstage. This led to him winning this year’s Olympia, and beating reigning champ Kamal Elgargni in the process. It was a moment of validation for the longtime bodybuilding veteran, as his dedication and determination paid off.

Following the contest, Shaun Clarida and Hadi Choopan decided to do some sort of a photoshoot together. The 212 Champ uploaded a few shots to his Instagram from the experience, and it was really cool to see. Here you can spot the two hitting a few complimentary poses, while standing on what just looks like a sidewalk, as the lighting casts their shadows on the wall behind them to make a cool visual effect. In the caption, Shaun put a wise quote from the always entertaining Kai Greene.

“Bodybuilding is an art, your body is the canvas, weights are your brush and nutrition is your paint. We all have the ability to turn a self portrait into a masterpiece. -Kai Greene”

It is really cool to see Clarida and Choopan posing side-by-side like this. Sometimes it is easy to forget that Hadi used to compete as a 212 bodybuilder too. So it makes it super intriguing to compare their physiques like this. Obviously there is a bit of a difference in weight between the two, but it would be curious to know how much they each weigh because there is a lot to like about Hadi in these shots, compared to the champ.

That being said, Hadi Choopan is pretty set on competing in the Open moving forward, and it makes sense given the weight restrictions, so we likely never see he and Shaun Clarida face off on stage. Yet it is still cool to see a visual like this, as these two incredibly gifted athletes stand next to each other and have a bit of a mock poseoff. We got to witness something similar with Big Ramy and Chris Bumstead recently too, and it is always cool to see.