Supplement Guide: Should You Cycle Creatine?

Creatine is the most popular sports supplement in the world, but is it safe for long-term use, or should you cycle it to prevent unwanted side effects? We reveal the answer! 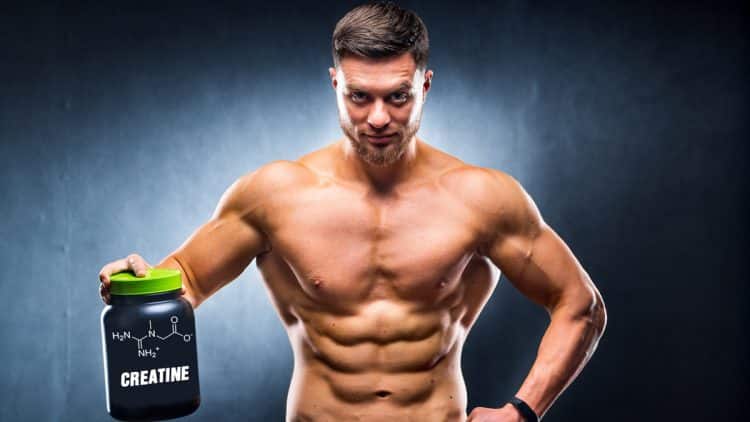 When creatine was introduced almost 50 years ago, the world sat up and took notice! Originally used to increase speed and power in elite Olympic sprinters, creatine quickly became one of the most popular sports supplements around.

And because creatine has been used consistently for so long by so many people, it’s safe to say that this supplement is one of the few that actually lives up to the hype.

But are creatine supplements safe for long-term use? Should you cycle creatine and take periodic breaks from it? Let’s discuss!

So, What is Creatine, Anyway?

Contrary to what you may have read in the media, creatine is NOT a steroid or prohormone. Unlike all steroids, creatine is in no way related to testosterone, and it won’t cause any of the side effects associated with steroid use, like ‘roid rage, back acne, testicular shrinkage, etc.

Instead, creatine is a naturally occurring substance made from two amino acids – glycine and arginine. Not only does your body make creatine itself, but it’s also found in most animal proteins, i.e., meat, poultry, and fish.

But how does creatine work?

Your body needs food for fuel. All foods (proteins, carbohydrates, and fats) are eventually broken down and converted into a universal source of energy called adenosine triphosphate, ATP for short.

When metabolized by an enzyme called ATPase, ATP releases a burst of chemical energy and becomes adenosine phosphate or ADP. However, ADP does not contain any useable energy and needs to be turned back into ATP to be useful.

Creatine phosphate (CP) gives up a phosphate molecule to turn ADP back into ATP, but your stores of CP are pretty limited.

While eating foods high in naturally occurring creatine can help with this process, using a create supplement is arguably the easiest, most efficient, and most time effective way to maximize your creatine phosphate stores.

The Benefits of Creatine Supplementation

Creatine offers a wide range of benefits which is why it’s such a popular supplement. However, while some people see excellent results from creatine, others are “non-responders” who experience little if any benefits from this supplement.

This could be genetic or simply because their diet is naturally high in creatine-rich foods, so supplementation has little or no effect.

Alternatively, some so-called creatine non-responders may not be training hard enough and eating well enough for creatine to work its magic. Creatine is a powerful supplement, but it can’t perform miracles! 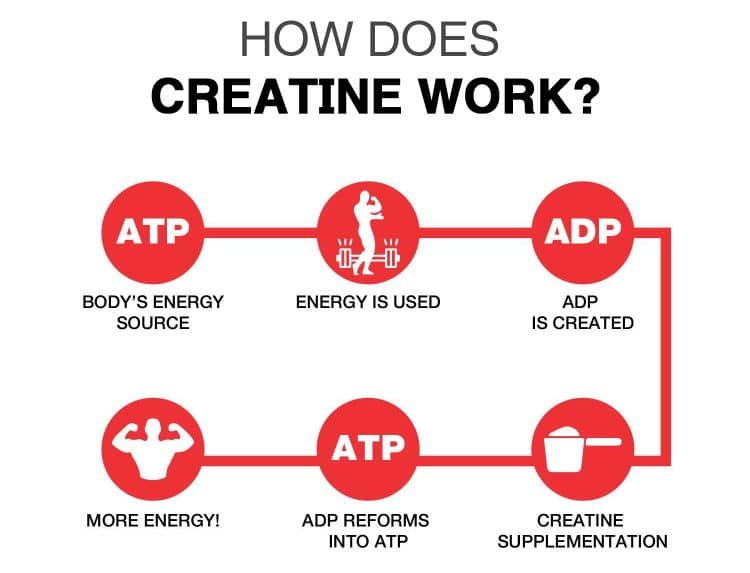 The main fitness benefits of creatine supplementation are:

Creatine isn’t just good for improving exercise performance; it has several health benefits too, including:

Of course, there will always be a few drawbacks to using creatine, but they’re usually fairly insignificant and easy to avoid. The most common downsides of creatine use are:

The good news is that most of these side effects are temporary and vanish once you finish loading and transition to a low daily maintenance dose (see next section for details). You can also minimize these side effects by consuming enough water with your creatine. How much is enough? Check out this guide and find out!

Read also: How Much Water Should You Drink While Taking Creatine?

However, creatine does NOT harm the kidneys and isn’t addictive. Nor will creatine increase aggression. These are creatine myths spread by sensationalist media. Even in large doses, taken for years at a time, creatine has been shown to be very safe (2).

Read more about the benefits and drawbacks of creatine in our article Is Creatine Bad for You?

How Much Creatine Should You Use?

One of the great things about creatine is that you don’t need to use a lot to experience all the available benefits. Creatine is also very cost-effective. As such, a little creatine goes a long way, and a 500-gram pot can provide you with 100 or more doses.

But, how much do you need to use to get the effects that you want?

Use our creatine calculator to determine your ideal daily intake of creatine.

Taking more is pointless because your body can only absorb so much. Any excess will be excreted in your urine. In other words, using more creatine just results in expensive urine as your body will pee away anything it cannot use.

The only reason to take more than five grams per day is if you decide to use a loading protocol to increase your creatine levels quickly. This typically involves taking five grams 4-5 times a day for 5-7 days. Once your loading phase is complete, you can drop to five grams daily to maintain your levels.

That said, if you use creatine HCL instead of the more common creatine monohydrate, your daily dose will be much lower. There is no need to follow a loading protocol as HCL starts working almost instantly. The average daily dose for creatine HCL is just 2-3 grams. However, HCL is usually more expensive.

Read more about the difference between creatine monohydrate and creatine HCL here.

Do You Need to Cycle Creatine?

This on/off sequence is thought to help reduce the risk of side effects and stop you from becoming immune to the effect of whatever you are taking.

While cycling can be useful for things like fat burners and pre-workouts, it’s not only unnecessary with creatine but will actually make your creatine usage less effective.

These are the main reasons you DO NOT need to cycle creatine and can stay on it for as long as you wish:

1. There are no known health risks for long-term creatine use

Studies have shown that even in very large doses, creatine will not harm your health (4). Instead, it’s safe and well-tolerated by almost everyone who uses it.

The side effects sometimes associated with creatine use (bloating, muscle cramps, etc.) are mild and short-lived, and creatine will not harm your liver or kidneys or cause any other health issues.

As such, there are no medical reasons to cycle creatine. 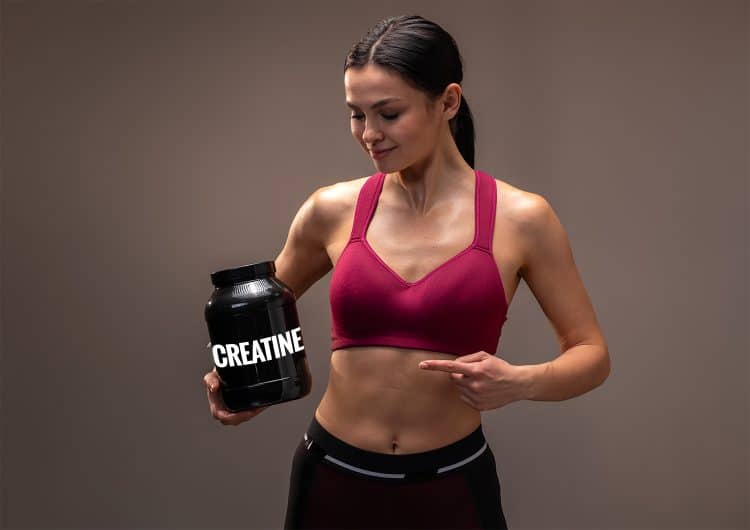 2. You don’t develop a tolerance to creatine

Your body can develop a tolerance to some drugs and chemicals. For example, if you drink a lot of coffee, your body will learn how to deal with large hits of caffeine, and it will cease to be so stimulating.

The same is true for alcohol. If you are a regular drinker, you’ll be able to consume more before you start to feel the effects as your body gets better at metabolizing alcohol.

However, that’s not how creatine works, and your body will not develop a tolerance to it. In fact, the harder and more often you train, the more creatine your body will be able to utilize.

Coming off creatine will not increase your sensitivity to it because that’s not how creatine works.

3. Creatine cycling means your levels will drop and, with it, your performance

Creatine only works for as long as you take it. If you stop taking creatine, your levels will gradually decline and drop back to normal. As your levels decrease, so will the benefits and effects of using creatine.

It can take anywhere from one to several weeks for creatine to build up in your muscles, so cycling means you’ll have to train without the benefits of creatine until your levels increase again.

While there is nothing wrong with training without creatine, doing so could make your workouts less productive, affecting your performance and progress.

4. Cycling creatine increases the amount you need to use

Most people start using creatine with a loading phase. This typically means taking five grams five times a day for five to seven days, adding up to between 125 to 175 grams of creatine powder. In contrast, you only need to take five grams per day for maintenance, or 35 grams per week.

On/off cycles means you’ll need to use large amounts of creatine to reload your muscles. This is a waste of creatine and money as there is no real reason to come off creatine in the first place.

In short, it’s easier and more cost-effective to maintain your creatine levels than load up, maintain, let your levels drop, and then reload again.

Should You Cycle Creatine – Wrapping Up

Creatine is one of the world’s favorite sports supplements. Why? Because it actually works! Whether you want to build muscle, run faster, jump higher, get leaner, or just train harder and longer, creatine can help.

It’s a cheap and reliable supplement that is also very safe to use, even in large doses for long periods.

As such, there is no need to cycle creatine. Unlike some supplements, creatine won’t lose its effectiveness with prolonged use, and your body doesn’t need periodic breaks from it to avoid side effects.

So, if you use creatine and like how it affects your body, just keep using it. There is no reason to cycle creatine.

Weight Management 101: How to Calculate Macros

What is Creatine? Creatine is one of the most popular workout dietary supplements. Those who participate in sports, bodybuilding, or...

Many women question if they should take creatine. You may be wondering about the answers to these common questions. Do...