Check out what the greatest female CrossFit athlete has in her garage gym. 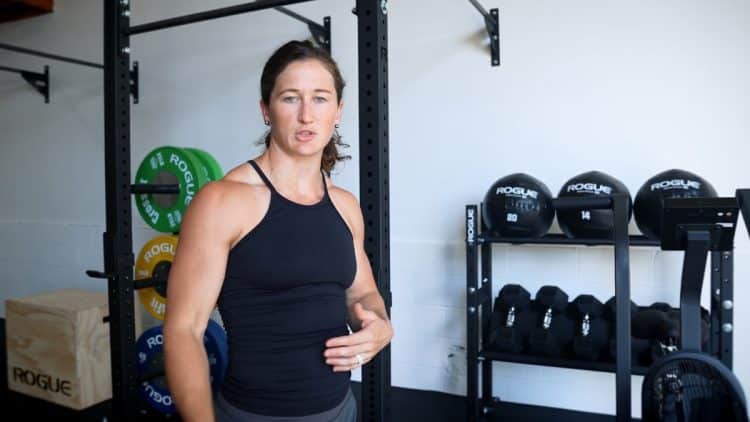 It is essential to have skills from a wide range of sports to be able to do CrossFit, and some of them cannot be learned in a training room. Nevertheless, athletes still have to put in a lot of training in the gym to maintain their elite fitness levels. This is especially true for Tia-Clair Toomey, who is advancing towards her sixth record-breaking title as ‘Fittest Woman On Earth®’. Toomey has her standard gym in which she trains, as well as a smaller garage gym which she has recently revealed.

Tia-Clair Toomey gave a tour of her garage gym on July 12th, 2022, through a YouTube video. She revealed that it is sometimes being used for training, but also for various seminars and projects by her team PRVN (Proven).

Tia-Clair Toomey also calls her garage gym the “Proven Headquarters Studio”, because her husband/coach, Shane Orr, decked out the place for the use of their business.

The first part of Toomey’s garage gym is filled with some Wall Balls, Medicine Balls, and Dumbbells. It is not a huge collection of either of these, as the purpose of this gym was not to fill it out like the usual ones.

“Because we primarily use this for the affiliates and also Proven 60 primarily, we have the appropriate weights there that the coaches will use.”

Straight in front of Tia-Clair Toomey’s dumbbell and ball collections, she also has one piece of equipment that no CrossFit gym can go without. This is the Echo Bike, and Tia-Clair can use it as well as any of her affiliates.

The right wall of Toomey’s gym is home to the massive steel rig, which is used for pull-ups, muscle-ups, and some other exercises. The empty space underneath the rig is used to store boxes and special weight plates, as they were used in the 2021 CrossFit Games.

Tia-Clair Toomey has another Echo Bike stationed up against the back wall. The Concept 2 BikeERG has its place right next to the Echo Bike.

“I have done a few workouts on this one myself and can say that they hurt.”

Toomey also has a few Kettlebells and smaller weight plates lying around or mounted on the wall. The back wall’s greatest addition is the multi-use rig. It can be used for squats, pull-ups, and much more. It can also be folded away so it uses up less space. To complete the back wall collection, Tia-Clair stationed her row machine in the corner.

A huge whiteboard is also a part of the gym and it is mainly placed to serve PRVN (Proven) Coaches in writing their ideas out. Tia-Clair Toomey also revealed that they will be going to Australia soon in order to finish up another gym.

“The equipment arrived when we were there for Taurian. Now it is all about just laying it all out and setting it all up.”

Tia-Clair Toomey is set to compete at the 2022 CrossFit Games, which will take place Aug.3-7, 2022, in Madison, WI. She will be the biggest favorite and if she is successful in winning her sixth title, Tia-Clair would become the all-time winningest CrossFit athlete.

Supplement Guide: Should You Cycle Creatine?