Give your glutes and hamstrings an amazing stretch with this lunge variation. 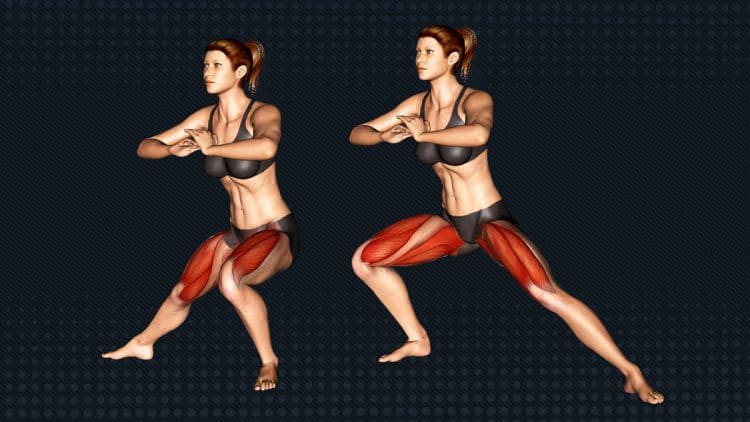 Combo exercises like the side lunge stretch should be a staple in everyone’s daily and/or weekly fitness regime. They’ll benefit everyone from sports athletes to gym goers and those who desire to maintain mobility and structural health for years to come. Side lunge stretches incorporate a deep lower body stretch when done right, the fundamental hip hinge, and muscle strengthening due to the resistance of your body weight.

Keep in mind though, it’s harder than you might think seeing as most people don’t perform exercises in the side-to-side plane (frontal) of movement. Then, adding in all of the other elements and it’s a toughie, but worth it!

How To Do Side Lunge Stretches

Side lunge stretches are similar to a lateral lunge but the focus should be more on achieving a full stretch in the lower posterior muscles. However, it does involve a unilateral squat which means you’ll train the leg muscles too.

Follow the steps provided below to perfect the side lunge stretch.

Start in a wide stance, feet roughly one and a half times the width of your hips, and toes pointed straight forward. Note: You may need to do a few practice side lunges to find the ideal foot placement.

The next step is very important and where many go wrong. In fact, poor technique can discourage someone from wanting to do side lunges and its variations.

To do this step:

Form tip: When you shift into a side lunge, you want to sit back into it, and do not lean forward. This will maximize the stretch in your glutes and hamstrings. You can hold onto an immovable object if you need assistance maintaining your balance while leaning slightly back into the lunge.

Step 3: Stand up and shift to the opposite side

You can see a demonstration of side lunges stretches via the following video tutorial. Note: If you cannot squat as low as the example below that’s ok, just go as far down as you can.

Where should you feel the stretch?

Unless you’ve actually performed this stretch or are an experienced exerciser, you might not understand where the stretch should occur during the side lunge stretch. Well, when you do side lunges stretches, one leg is bent while the other is straight. You should feel the stretch in the glutes and hamstrings of the straight leg.

Although, during a squat, bent legs are technically in the stretched or eccentric phase of the exercise. However, the stretch is not as pronounced like when you’re doing side lunge stretches.

Side lunges are a fantastic lower body movement with notable benefits. Here are some reasons to do them.

Stretch your glutes and hamstrings

Some people don’t have the time or desire to stretch. That’s where these hybrid type exercises can be very beneficial because you’re doing both in one movement. The glutes and hamstrings can become tight from too much sitting, overuse, or not being stretched for long periods of time.

Most of you probably can’t descend into a low squat during the side lunge stretch. Not to say everyone is stiff and lacks flexibility but lateral stretches like this one aren’t quite as popular. It’s a great way to work on flexibility in the frontal plane while keeping the hamstrings and adductor muscles loose and healthy.

Lunges are a powerful leg building exercise and side lunges are a great advanced variation for intermediate and advanced exercisers. Not to mention, you can add resistance to make them more challenging and beneficial.

Let’s be honest, this isn’t a biceps curl or triceps pushdown. You need to have some ability to do side lunge stretches. They require balance, coordination, core stability, joint mobility, total body strength, and flexibility. You’ll be better for deciding to include this exercise in your fitness routine.

Side lunge variations are not easy at first. They require attention to detail and the right body position to feel the stretch where it needs to be felt and not pain in your knees. Here’s what to avoid during side lunge stretches.

Too narrow stance – Keeping your feet too close together will not work for this exercise. Although, if you must, it is acceptable to do a side step into a lunge stretch. But oftentimes, people will use a narrow stance and try to make it work, pushing the knees too far side ways away from the feet and this is bad. Take a few minutes to find the perfect stance and you’ll have a much better experience.

Leaning forward instead of back – It’s natural to want to replicate a front or side lunge even when performing the side lunge stretch variation because it feels comfortable and not awkward. That’s why it’s so important to remember technique cues so that you don’t make that mistake. The stretch is different from a side lunge.

Now let’s see the best side lunge stretch variations and ones that we personally like.

Side lunges can emphasize more of the posterior or quadriceps muscles depending on your body position and technique. Using more of the hip hinge and sit back technique with feet pointed straight forward will be better for the glutes and hamstrings whereas pointing your toes slightly outward and bending your knees forward past the feet is going to target more of the quadriceps.

Either can work but your feet need to be pointed in the right direction both for the safety of your knees and to maximize activation of the target muscle groups.

Side lunges are a great leg exercise when you can make them challenging enough to see strength and muscle gains. It may take you a while to get proficient using just body weight but the best way to progress is to hold weights (e.g., dumbbells, barbell, kettlebells, weighted vest, loaded backpack, etc). Some examples are holding two dumbbells or you could do a goblet side lunge.

Seeing as the side lunge is essentially a unilateral exercise, you don’t need much resistance to make them harder and more effective.

Include more lateral movement and stretch both legs in a single repetition with crossover lunges. It’s also a great variation for athletes who can benefit from training in complex positions, while improving coordination and lateral ability. This variation is similar to the curtsy lunge which you can find a full guide on here.

Because this variation is a side lunge “stretch”, we recommend including it either later on in your leg workouts or after several minutes of cardio that gets blood in the muscles. That’s because you don’t want to stretch a cold muscle as it doesn’t have the same elasticity as a warm muscle. It’s a good preventative measure but you’ll also get a much better stretch in the butt and hamstrings.

You can program side lunge stretches as you would any resistance based exercise because it does qualify as one.

While the side lunge stretch is intended to be a stretching exercise, it does activate the lower body muscles. Learn about each one and their anatomy below.

How Are Side Lunge Stretches Different Than Side Lunges?

There are a few distinct differences between the two variations.

Stance – In a lunge stretch, you want to start in a wider stance as you’ll be shifting from side to side. Whereas a side lunge will typically start from a narrower stance and involves stepping the foot out laterally into a lunge. Although, side lunges can certainly begin with a wide stance too.

Toes – While we suppose it’s entirely up to the individual, you’d normally keep the toes pointed straight forward in the side lunge stretch and turned slightly outward for side lunges. There’s a reason for that. The feet should be pointed forward because you’re hinging at the hips and leaning back and this seems to work best biomechanically. When you point the toes slightly outward, it encourages more of a forward lateral movement.

Why are side lunges harder than conventional front lunges?

Unless you’re an athlete, most people train mostly in the sagittal (forward and backward movements) plane. Side lunges occur in the frontal (side to side) plane which typically requires an adjustment period.

Do side lunge stretches also build the legs muscles?

While it is a stretch-focused exercise, side lunge stretches are a single leg squat variation which means they work the quads, glutes and hamstrings too.

If you’re going to invest in the benefits of stretching then we highly recommend including side lunge stretches as part of your fitness regime. It’s a two in one exercise that merges the advantages of stretches with resistance based technique to elongate and strengthen the lower body muscles.

Whether you do them in the morning or after training doesn’t matter as long as you do them or something similar to keep your muscle healthy and workable.