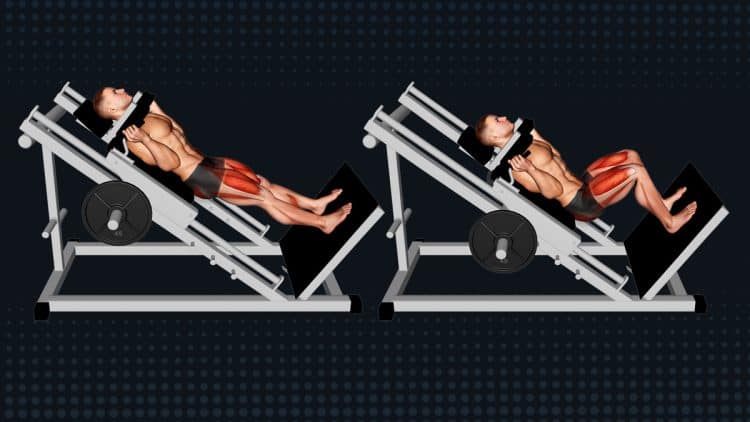 If there was an official list of best-loved machine leg exercises, we’re confident sled hack squats would rank near the top. That’s not because they’re any better than freeweight barbell squats or the many other notable variations, per se. But perhaps it’s the combination of an angled design (pretty much a reclined squat), full body support, and ergonomic arm position that makes it attractive to many gym-goers.

While you won’t activate as many stabilizer muscles or engage the core to the same degree as you would balancing a loose barbell on your upper back, sled squats are a purely leg-focused lift.

How To Do The Sled Hack Squat

We’ll assume some of you are attempting sled hack squats for the first time and if so we have a few tips to help you succeed. It may also be helpful to watch the short video demonstration that we provided below the written instructions. If you have used a sled hack machine before then we hope this guide will also provide you some value.

Beginner tips:  Before adding weight to the machine, determine if it needs to be adjusted up or down for your height and make sure that you know how to use the safety levers that allow you to move up and down freely. There are different types of sled hack machines so don’t be afraid to ask someone or read the instructions if located somewhere on the equipment.

Facing away from the machine, step up onto the footplate, place your back flat against the padding and secure your shoulders underneath the cushioned arms.

This will vary depending on the person but we typically recommend placing your feet roughly shoulder width apart and turning the toes slightly outward.

Pro tip: Keep your feet lower on the footplate to emphasize more of the quadriceps, and higher up on the platform to target more of the hamstrings. Although both muscles will get worked regardless of where you place your feet.

Before you descend into a squat, place your head back against the pad, tense your core muscles, disengage the safety levers and then grab onto the shoulder support arm handles. Slowly drop your butt down until both legs are at or slightly below parallel to the foot platform. Drive through your heels and midfoot until your legs are fully extended.

Repeat for the desired number of repetitions.

Check out the video demonstration below to see how it’s done.

Here are some things to avoid when performing sled hack squats.

Machine exercises can be a double edged sword. On one hand you don’t have to balance and stabilize the weight leaving you to focus solely on the lift. But with that often comes the temptation to load the exercise too heavy, resulting in a shortened range of motion and over assistance from other muscles groups to help compensate. This can also be a problem if you have less than optimal knee health or pain.

While it’s not a crime to vary your foot placement on the machine platform, at least make sure to have some consistency. If you’re going to place your feet higher up on the platform, you should know that it will emphasize the hamstrings. Therefore, you need to structure your leg routine to equally hit both the quads and hamstrings to prevent muscle imbalances. In other words, have some structure in your training.

Why should you choose to include Smith machine hack squats in your leg workouts?

Better than freeweight back squat…

Don’t let anyone make you feel like freeweight exercises are the only way to make gains. Sure, they’re a necessary component of a well-rounded fitness regime and have their advantages, but they’re not always the best option. Many times taller lifters will shift their hips too far back and as a result, they’ll feel the freeweight barbell back squat more in their lower back and less on their quads. It becomes more of a good morning than a squat.

Being able to position your feet out in front of your body during a Smith squat can be a gamechanger for these individuals because it allows them to remain more upright in a more comfortable and ergonomic angle for their bodies.

When you have an arsenal of different exercises or are open to including new movements in your workouts it really does make it easier to walk into the gym and perform near or at your best, consequently resulting in continued gains and progress.

The sled hack squat is one of the variations that you look forward to, however, it ultimately comes down to the individual.

No balancing a bar

Free weight squats require an additional level of focus to keep the bar in place, and evenly balanced whereas machines don’t which makes it such an attractive option. The bar is fixed and pre-balanced so that all you need to do is load and go!

So why do Smith machine squats oftentimes get a bad rap?

Freeweight movements are often considered superior to other forms of exercise overall because they require heavy use of stabilizer muscles. This is believed to result in better overall development and yeah there’s probably some truth to that (1). However, when it comes to hitting the primary muscle groups (e.g., pectoralis major, gluteus maximus), machines will allow you to lift heavy and stimulate those areas for max gains. In one study where volunteers performed both variations for comparison, the Smith machine squat one-rep max lift was higher than that tested by the freeweight squat due to less stabilizer requirements (2).

Smith hacks may not allow you to lift as much weight compared to a conventional Smith squat but you get the idea.

Both a pro and con depending on who you ask. Some people are totally against Smith machine squats while it’s a saving grace for others. Being restricted in your movement means you have to adjust to the design of the machine but then again, it’s nice to be locked in where you can rely on a machine to hold you in place.

But when it comes to functional strength development, freeweight squats win hands down. That’s because with machine exercises you’re missing the raw nature of a compound, multi-joint lift. You can get great results by incorporating both.

Check out these awesome sled hack squat variations that involve a similar setup and movement patterns.

For every gym rat who loves to lie face up on the hack squat machine and stare at the mirror (nothing wrong with that), there are those who prefer to face the machine. It’s more like a conventional squat position.

Check out this explanation and demonstration of the reverse hack squat by legendary trainer Charles Glass. Bonus: Try stiff-legged deadlifts on the hack squat as also shown in the video example below.

Place your feet closer together to emphasize more of the outer quads and use a wide stance may stimulate more of the inner quad muscles and adductors.

You can also replicate the hack squat on a Smith machine and to be honest, it’s a great variation. Like the hack squat machine, you can move your feet forward in front of your body which you cannot do with a freeweight barbell squat. The Smith variation may not be as ergonomic compared to a specially designed hack setup, but it is an option, and it does work well.

The feet should be roughly 1-1.5 feet in front of your normal squat stance to really benefit from this movement.

While more awkward than the Smith machine hack squat, the barbell hack squat is the perfect choice for when you don’t have access to a machine or you like challenges. It’s actually more like a deadlift but while holding the bar behind your back (backloaded deadlift) and your quads will get absolutely torched with this variation.

If you want to replicate a loaded upright squat without the weight resting on your upper back and loading the spine then the underrated belt squat is a movement you should consider. And more like the hack squat, your feet can be positioned in front of your body.

A dipping style belt is worn around the waist and attached to the loaded floor squat implement. These machines typically come with some sort of handles for support.

Leg presses are similar to a hack squat in some ways especially because your back is supported through the movement. Therefore, while both do engage the core muscles, it’s not to the same degree they would during a freeweight variation.

But that’s also advantageous because these types of exercises focus on building pure strength and consequently, heaps of muscle growth.

How To Program Sled Hack Squats In Your Workouts

A versatile movement, sled hack squats can be used for different purposes which makes it advantageous over other exercises. You can utilize it as a warmup, primary compound movement, or finishing exercise. It also makes for the perfect choice on those days when you want to hit the legs hard and heavy but aren’t up to doing freeweight variations.

If you’re just starting out, you may not need to add extra weight as training on a new implement may be challenging enough.

While it depends on your training experience, we’ve included a few sets and reps range recommendations based on common training suggestions according to specific goals. Although, we always suggest using different rep ranges for the best overall gains.

As we always say, squats and its variation are a total body movement. There’s not a single major muscle that doesn’t help to either lift, support, or stabilize during the exercise. In this section, we’ve included brief descriptions of the muscles involved in the sled hack squat.

So if you always wondered what that sled looking machine is in your gym, it’s one of the best leg building movements and we highly recommend using it… just make sure not to get too addicted. Make sure to include other squat variations and freeweight exercises in your training for the best results for well rounded leg development.

When Does The Body Start Burning Fat During Intermittent Fasting?

Whether you’ve got a Bowflex home gym already or are thinking of buying one, you’ll be glad to hear these...