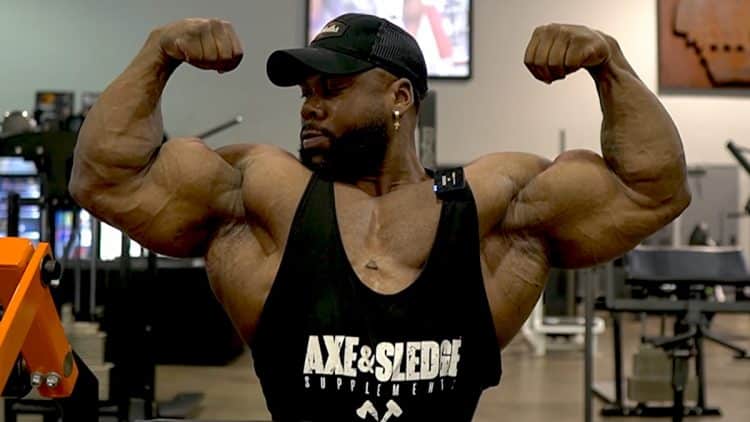 Keone Pearson feels he is the ‘biggest and leanest’ than he has ever been in his career. His focus now lies on adding more detail and definition to his physique heading into the 2022 Olympia. Keone ‘Prodigy’ Pearson is an American professional bodybuilder. He has enjoyed successful rides in the Classic Physique and the 212 divisions of the IFBB Pro League so far in his career. After securing fourth place at the 2019 Olympia Classic Physique, Prodigy switched to the 212 division. A win at the 2020 Chicago Pro qualified him for the 2020 Olympia. However, his divisional debut on the grandest bodybuilding stage did not come to fruition due to personal reasons. Keone qualified for the 2021 Olympia and finished 14th in the 212 division. He has secured a spot at the 2022 Olympia with a statement victory at the 2022 Tampa Pro.

Recently, the 27-year-old went through an arms workout as a part of his competition prep. The video of this training session was uploaded on Pearson’s new YouTube channel. So without further delay, let’s see how the Georgia native annihilated the arms.

Keone Pearson trained his arms with a high-volume workout with the primary goal to add definition and details to his physique. The 2022 Tampa Pro winner stated this was his first arms workout in a long time. During his routine, he has never dedicated an entire day to arms workouts. Instead, he typically trains them along with other muscle groups.

Pearson stated that he likes to start the training sessions with simple movements and took to the standard dumbbell curls first. He did two to three warm-up sets of this exercise with 30lbs dumbbells to get the blood flowing into his arms.

“Body fat is really really low right now. So we’ve got to be careful, we’ve got to warm up and from there we’ll just start working. So let’s go after it,” Keone stated.

The 27-year-old opined that letting the body move back and forth during the range of motion is not necessarily wrong as long as you focus on the biceps. He did two working sets of biceps curls with 50lbs dumbbells and followed up with a double drop set with 40lbs, 30lbs, and 20lbs dumbbells to get a ‘stupid pump’ in the biceps. Keone took a good look at his handiwork in the mirror for a little while and took to the next exercise.

The Prodigy targeted his triceps with this exercise next. This overhead movement emphasizes the long head of triceps and enables full elbow flexion to get a good squeeze in the triceps. While speaking about the purpose and technique employed for this movement, Keone stated:

“We’ll keep the rep range between 12 to 15 reps, really try to get that squeeze in the fibers, striations on the triceps… We’re not lifting crazy, we’re just focusing on details at this point. We’re just really trying to bring the most detailed package.”

The Georgia native admitted that he has to be ‘extra extra peeled’ to compete against the very best competition at the 2022 Olympia. Therefore most of his efforts at this point are directed toward that goal.

Pearson followed the same pattern and did a couple of warm-up sets to get started. He then did two working sets and a drop set before jumping into the next exercise.

This movement served as the second biceps isolation movement of the day. The 27-year-old did the preacher curls unilaterally with 25lbs weight and cranked out a few good sets.

“I’m just really focused on the squeezing and the contraction and let these fibers and everything do their job.”

Pearson worked his triceps further with the cable triceps pushdowns. However, instead of using a straight bar handle or a rope attachment, he used a banded cuff attachment for the exercise.

“I just love this f***ing handle. I don’t know what it’s called but I just feel a very very great contraction when I do triceps extensions with it,” Keone stated.

Maintaining a 12 to 15 rep range, The Prodigy cranked out a few solid sets of this exercise and took to the next one.

Pearson performed this as the final biceps exercise of the day. The hammer curls work the brachialis, brachioradialis, and biceps brachii muscles. He used heavier weights and did his sets to failure. Shedding light on the preparation so far, the 27-year-old said:

“Mind is super clear, I feel amazing. This is the best I ever looked and this is the biggest, this is the leanest. I really can’t wait to display the physique for you guys.”

Keone Pearson wrapped up the training session with this antagonistic superset. While the overhead rope triceps extensions work the triceps, the EZ bar curls stimulate the biceps. He did all the sets of these exercises in rapid succession and with minimal rest periods to wind up the workout.

Keone Pearson will go up against some of the most elite bodybuilders that the 212 division has to offer. Former champion Shaun Clarida recently confirmed that he will compete in the 212 division at the 2022 Olympia. Reigning divisional king Derek Lunsford has received a special invitation to compete in the Men’s Open division. The 2019 Mr. Olympia 212 champion Kamal Elgargni and Clarida will be the frontrunners for the title in Lunsford’s absence. However, Keone Pearson is a hungry young contender that has the potential to upset the order if he continues to train smart.

You can watch the full workout video here, courtesy of the Keone Prodigy YouTube channel:

When Does The Body Start Burning Fat During Intermittent Fasting?