Learn how you can use the standing skull crusher to build mass and definition in your triceps. 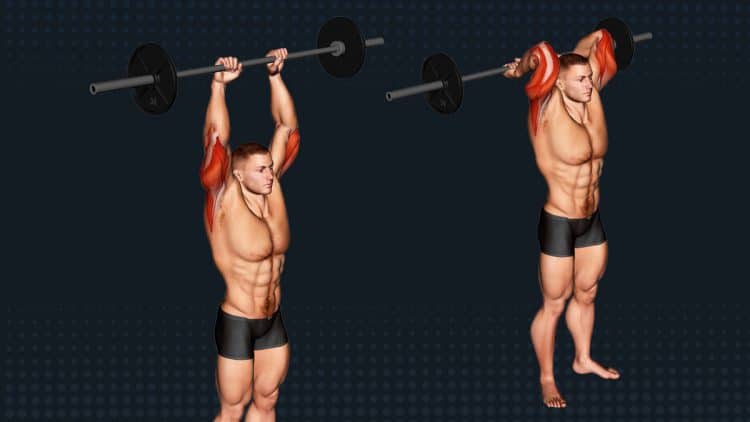 If you are after big arms, then you need to be working your triceps hard and often. Of the three triceps heads, the long head can be the most stubborn. In this article, we’re going to talk about a great exercise to target the long head of the triceps — standing skull crushers.

The triceps is the muscle at the back of your upper arm and consists of three heads — the long, medial, and lateral heads. Of the three, the long head is the meatiest, accounting for around two-thirds of the mass of the triceps.

The job of the triceps is to extend the elbow, moving it from a bent to a straight arm position. All three triceps heads have the same insertion point, the olecranon, at the base of the ulna bone. However, they have different points of origin. 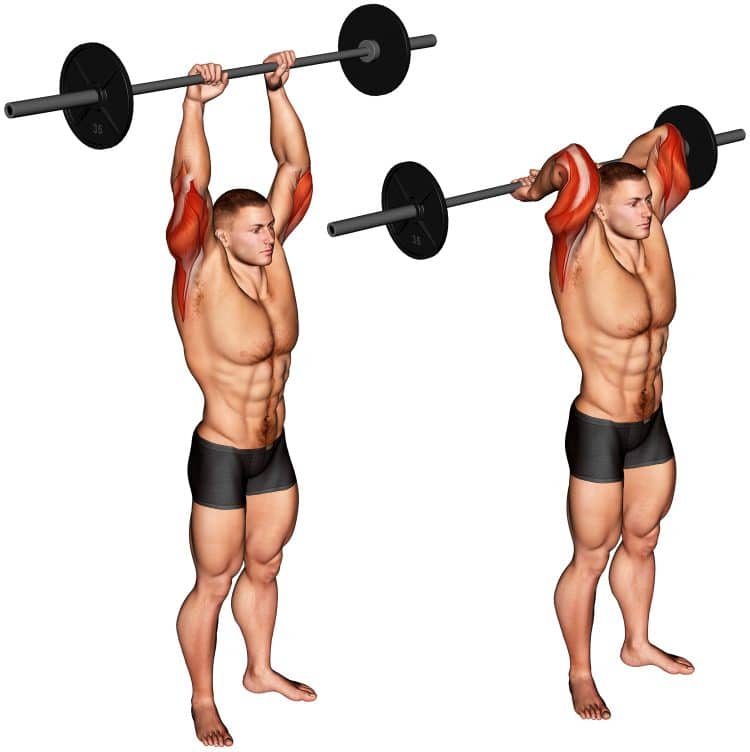 Benefits of the Standing Skull Crusher

The skull crusher, also known as the triceps extension, is an effective exercise for building triceps mass. It has been a favorite of bodybuilders for decades and can be done with either a barbell or dumbbells.

The standard skull crusher is done lying on a bench. However, the standing skull crusher helps put a greater focus on the long triceps head due to the increased range of motion.

How to Do the Standing Skull Crushers

This is how to perform the lift with the correct form:

Some of the most common mistakes when performing the standing skull crusher include:

When you flare your elbows to the sides, you take the emphasis off the triceps and onto the shoulder joint. You also bring your scapula and trapezius into the movement.

Many lifters make the mistake of using momentum to bring the weight back to the starting position. Doing so takes off the tension from your triceps. Your back should remain in a neutral upright position throughout the exercise.

3. Kipping of the Hips

Kipping or bucking the hips forward brings momentum into the movement to make it easier to get the weight up. Your hips should remain in a straight line with your shoulders throughout the movement.

Below are a few standing skull crusher variations and alternatives worth trying:

You can also do the standing skull crusher with a pair of dumbbells. There are a couple of advantages of doing the exercise with dumbbells:

While it is true that you cannot lift as heavy when using dumbbells, it shouldn’t be a point of concern. Many people find that dumbbells allow them to follow a strict range of motion, which better targets the long triceps head. Remember, your muscle doesn’t know how heavy the weight is; all it knows is how hard it is being worked.

The seated skull crusher is a stricter version of the exercise than the standing version. That is because, when you sit down, you remove the possibility of kipping your hips to assist the movement. You want to remove all momentum from this exercise.

You will probably find that you can’t lift as much weight on the seated skull crusher compared to the standing variations. But you will be doing the exercise with a better form, and that is what really matters.

The standard way of doing the skull crusher is while lying on a flat bench. While this is an effective variation, you could improve the intensity by moving to a decline bench. Many people find it hard to squeeze the triceps at the top of the movement while performing the flat bench skull crusher.

When you use a decline bench with an angle of about 40 degrees, you place your humerus (upper arm) in a more natural position. In fact, it is similar to what it would be on a triceps pushdown, allowing for a more ideal direction of anatomical movement. Try doing the lying skull crusher on a decline bench, and you might experience better muscle engagement, especially at the top of the movement.

Read our in-depth guide on the decline skull crushers here.

I recommend using a wide range of reps on this triceps movement. That will allow you to work both the fast-twitch and slow-twitch muscle fibers for overall development. Here is a rep scheme you should give a try in your next triceps workout:

Increase the resistance on every set. Your rest between sets should be 1-2 minutes.

Should you go heavy on the skull crusher?

You should use a weight that allows you to perform your reps with good form. Most people find that when they use a weight that limits them to eight or fewer reps on the skull crusher, their elbows tend to flare out, which takes the emphasis off the triceps.

What bar is best for skullcrushers?

The best bar for skullcrushers is the EZ curl bar. This bar lets you hold the bar in a semi-pronated position. This position is more natural and comfortable than the fully pronated grip you must use with a straight bar.

Do skullcrushers work the entire triceps?

Yes, the skull crusher does work the entire triceps. While all three heads are activated, the long head gets the greatest degree of engagement because it is attached to the scapula. The medial and lateral heads are only attached to the humerus.

The standing skull crusher is an effective exercise to add to your triceps training arsenal, especially if you want to bring out the long head of the triceps. We recommend using an EZ curl bar to put your wrists in a more comfortable position.

Do the standing skull crusher after triceps pushdowns and then finish with reverse dips, and your triceps will have no other option but to grow. Make sure, though, that you use a weight that will allow you to maintain proper form, keep your elbows in, and do not kip with your hips.

Water-Only Fasting (WF): Is It Safe?

Bodybuilding is a time-consuming activity. Not only do you have to find time to train 4-6 times a week, but...

Barbells have been around for hundreds of years. Despite being so old-school, there isn’t a better training tool for building...