No gym? No problem! Build your best triceps ever with this challenging bodyweight arm exercise. 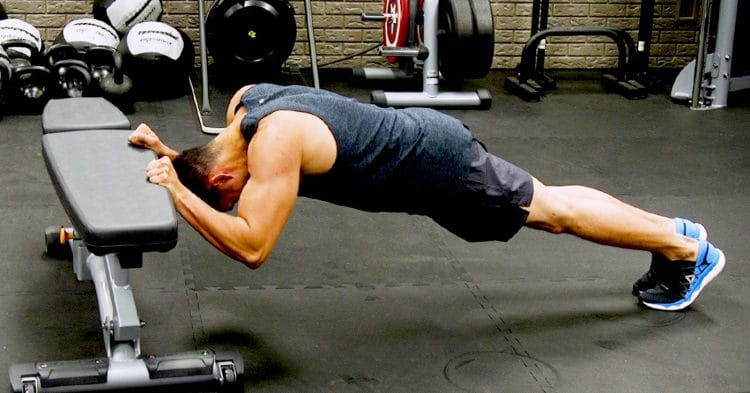 Skull crushers, also known as supine triceps extensions, are an excellent free weight triceps exercise. Bodybuilders the world over, use this move to add mass to their upper arms. Typically performed using a barbell, EZ bar, or dumbbells, you can also do skull crushers using a low cable machine. But however you choose to do it, you can be sure that this exercise is one of the best triceps exercises around.

But what if you don’t have access to gym equipment? Maybe you’re traveling or just prefer to work out at home. Does that mean skull crushers are off your workout menu? Not so fast! The good news is that there is a bodyweight version of skull crushers that you can do pretty much anywhere.

As stated above, skull crushers mainly work your triceps brachii or simply triceps. The triceps have two main functions – elbow extension and shoulder extension. The triceps have three distinct heads, which gives them the horseshoe shape this muscle is famous for.

The three heads are:

While all three heads share the same insertion point, the olecranon, which is a bony prominence at the top of the ulna near your elbow, they have three different origins. The long head crosses the shoulder and the elbow functioning at both of these joints, while the lateral and medial heads only cross the elbow.

Skull crushers work all three tricep heads but slightly emphasize the long head. The reason being is that the long head has to work hard to stabilize your shoulder joint and prevent it from moving.

Bodyweight skull crushers are technically an isolation exercise because, when done properly, your elbow is the only joint that should move. However, as well as working your triceps, this exercise also involves your latissimus dorsi and rectus abdominus muscles. Both of these muscles act as stabilizers to keep your shoulders and torso steady while your elbows extend and then flex.

Have the basic gym equipment? Read our skull crushers guide with dumbbell.

How To Do Bodyweight Skull Crushers

To do bodyweight skull crushers, you are going to need a knee to waist-high platform on which to place your hands. You can use a workout bench, a sturdy chair, or a box. Make sure that, whatever you use, it won’t move while you are exercising. If your platform slides away from you, you could fall and land flat on your face. Note: the higher the platform, the easier this exercise is.

Once you have found your platform, follow these instructions.

1 – Place your hands on the platform about shoulder-width apart. Walk your feet back and into the push-up position, with your knees, hips, and body straight. Move your feet a little further back, so your shoulders are now behind your hands, rather than directly above them.

2 – Brace your core and pull your shoulders down and back for stability. Rotate your arms, so your elbows are pointing down toward the floor. Do not let them flare out to the side as this reduces the effectiveness of the exercise.

3 – Keeping your body straight and rigid, bend your arms while keeping your arms tucked into the side of your body. Lower your head down to your hands. Your upper arms should remain mostly stationary, and your elbows should be the only joint moving. Remember, this is NOT a push-up!!

4 – Without dropping your hips or losing core tension, extend your arms and push yourself back up to the starting position.

There are several different ways to do bodyweight skull crushers, both for variety and adjusting the intensity of this exercise.

If bodyweight skull crushers have a disadvantage, it is that you have to lift and lower your body weight using just your arms. This may mean that this move is too hard for some people. You can remedy this problem by adopting a split stance, with one foot in front of the other, and using your front leg for assistance.

As you get stronger, gradually move your lead leg back until you can do this exercise with your feet together. This is an excellent way to gradually increase the difficulty of your workout, as you would in the gym by adding weight.

Kneeling bodyweight skull crushers put much less weight on your arms than the standing version. This makes them ideal for beginners and heavier exercisers. Kneel in front of your platform, place your hands on the top, and then perform as described above, remembering to keep your core braced throughout.

You can make bodyweight skull crushers a whole lot easier by using a wall instead of a platform. The higher you put your hands on the wall, the less weight there will be on your arms, and the easier the exercise will be. Increase the difficulty of this exercise by moving your feet further away and your hands lower on the wall.

Wall bodyweight skull crushers are also a good option for home exercises who don’t have a suitable platform on which to rest their hands.

Suspension trainers like the TRX make most bodyweight exercises, including skull crushers, much more challenging. As well as lifting and lowering your body weight, you also need to work hard to stabilize your shoulders as the handles will want to move apart and away from you.

TRX skull bodyweight crushers can be performed standing, in a staggered stance, or kneeling. The shorter the strap, the easier this exercise will be.

For this variation, you replace your stable platform with a strong, tight resistance band fixed between two stable anchors, such as posts or pillars. As the name suggests, the band will shake violently, and you’ll feel like you are working out in an earthquake!

This variation will fire up your deep stabilizers and also increase triceps muscle activation. Be warned, this is a VERY challenging exercise, but you can make it easier by using a staggered stance or by kneeling down.

If you have mastered bodyweight skull crushers, you can make them harder by increasing your mass. That doesn’t mean you can pig out on junk food to gain weight! Instead, put on a weighted vest or a backpack loaded with whatever heavy objects you find lying around.

A little extra weight goes a long way and will have a significant impact on the intensity of this exercise. Start with just 5-10 lbs. and increase from there.

This variation involves lowering your head down below the level of your hands to increase the range of motion. Increasing the ROM will give your triceps a deep stretch and make the exercise much more demanding.

If you try this variation, do so with caution as it also increases the stress on your joints, including your shoulders. Try the staggered or kneeling version before doing standing deep-dive bodyweight skull crushers.

Can’t find a suitable platform for this exercise? No TRX available? Nowhere to suspend a resistance band? Don’t worry; you can still do bodyweight skull crushers.

For this variation, get into the push-up position with your hands on the floor, roughly shoulder-width apart. Lift your butt up and into the air, so your body resembles an inverted V. Bend your arms until your forearms and elbows touch the floor. Push back up and repeat.

Do you have any questions about bodyweight skull crushers? We’ve got answers! If you can’t find the information you are looking for below, drop us a line in the comments section, and we’ll get back to you as soon as we can.

Bodyweight skull crushers hurt my elbows – what can I do?

While bodyweight skull crushers are great for your triceps, they can be hard on your elbow joints. It’s normal for your triceps muscles to hurt during this exercise, but you should not feel pain in your joints. To remedy this problem, try moving your hands out a little wider, using one of the less challenging variations, or reducing your range of motion. If your elbows still hurt, you should avoid this exercise and do something else instead, such as close-grip push-ups. They still work your triceps but usually involve much less elbow joint strain.

How should I warm up for bodyweight skull crushers?

A thorough warm-up will reduce your risk of injury and also fire up your muscles and nervous system to make your workout more productive. One way to warm up is to do a few minutes of light cardio, such as jogging or jumping rope, followed by dynamic stretches and mobility exercises for the body parts you are about to train. You should then do a few easy sets of the exercises in your workout. For this exercise, we suggest doing 1-2 sets of push-ups, followed by something like kneeling or wall bodyweight skull crushers. You should then feel ready to go.

How can I do drop sets with bodyweight skull crushers?

While you won’t be able to strip weight off, you can still do a form of drop set by gradually regressing the difficulty of this exercise as you fatigue. Start with the hardest version of bodyweight skull crushers that you can manage and then work backward through some easier variations. This is called a mechanical drop set.

Do not rest between exercises. Instead, rep out to failure than then quickly move to the next variation. Resting too long between moves will make your drop set less effective.

How many reps of bodyweight skull crushers should I do?

Your rep range should match your training goal. The commonly recommended rep ranges are:

Choose the version of bodyweight skull crushers that takes you to or very close to muscular failure within the appropriate rep range. This may mean you need to use two or more variations within the same workout to keep you in the correct training zone.

How often should I do bodyweight skull crushers?

Bodyweight skull crushers provide your triceps with an intense workout that can also be hard on your elbows. Because of this, most exercisers should do them just once or twice per week. Doing them more often could result in joint pain and even injury.

Home triceps exercises don’t get much better than bodyweight skull crushers. This exercise will increase muscle size and strength, and you don’t need any special equipment to do it. It’s not an easy exercise to master, but there are several variations to try, so you should be able to find one that matches your current strength. That said, if you find this exercise causes new pain or aggravates old elbow pain, do a less joint-testing exercise, such as push-ups.

How often do you wake up in a cold sweat in the middle of the night thinking, "If only I...