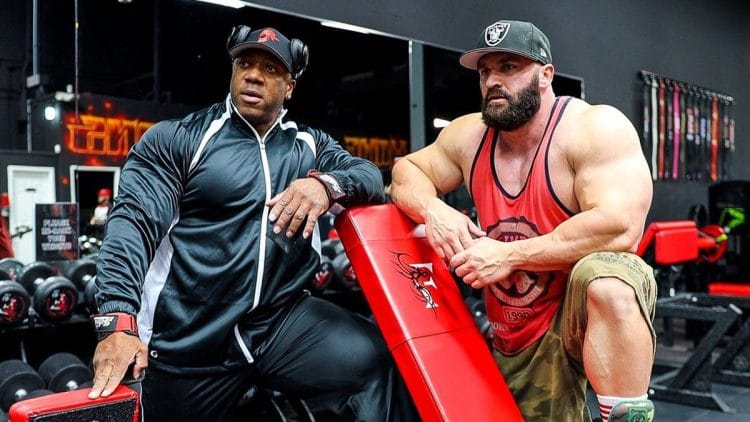 IFBB Pro Bodybuilder Stanimal De Longeaux recently shared late Shawn Rhoden’s side of the story in the infamous sexual assault case. Stan is a Classic Physique competitor and a teammate/training partner of the late bodybuilder. He was privy to Rhoden’s personal account of the incident and everything that followed later. During his recent appearance on The Menace Podcast hosted by Dennis James, Stan De Longeaux spoke candidly about the matter and raised a curtain from a lot of unknown aspects of the case.

Shortly after his 2018 Mr. Olympia win, Shawn Rhoden was accused of raping a woman during his visit to Salt Lake City. He was officially charged for rape, object rape, and sexual abuse in July 2019 in the state of Utah. It was alleged that Shawn Rhoden invited the married woman to his hotel room in Salt Lake City where the incident took place.

The organizing body for the Olympia competition, The American Media LLC in its statement revokes Rhoden’s eligibility from competing at 2019 Mr. Olympia as well as all future competitions. IFBB also issued a statement and said that no action will be taken against Rhoden until further details of the case emerged. The case saw little progress in the years that followed. Shawn Rhoden’s passing in late 2021 put an end to the prospect of getting to the bottom of the truth.

Stan recalled that Shawn Rhoden always denied any such encounter with the woman. Also, he revealed that even the DNA of the semen sample found in the case did not belong to the late bodybuilder. According to Stan De Longeaux, Rhoden was willing to do everything to redeem his name and cooperated with the agencies in their investigation. However, he claimed that there were a lot of questionable aspects to the case and said:

“When the police came by later to his hotel room, Shawn was letting them do whatever they wanted. Then he went back home to California and he flew back to Utah. I don’t know how long it was later, but not much later. To like to do… a lie detector test. He was just like, ‘I’m willing to do whatever to clear my name.’ Even like recently, they got her phone. They were requesting her phone for a long time and she just submitted her phone, I don’t know… Like two months ago, three months ago… like towards the end of last year. There’s a lot of things that are not right in this case.”

Stan De Longeaux further added that Shawn Rhoden never backed away from helping others and that’s how he came to know the woman in question. According to Stan, Rhoden had helped her monetarily for one of her shows in the past and shared Shawn Rhoden’s version of the incident.

“Apparently, he never gave her the address or anything. She just found that out. What Shawn told me, she wanted to thank him because he had helped her for the show by giving her the money. So she wanted to bring him some muffins or something and she showed up to his hotel. Reportedly, her husband dropped her off.”

Stan De Longeaux admitted that he has not seen the official paperwork in the case. Rather, he shared Shawn Rhoden’s side of the story based on his personal conversations with the late bodybuilder. However, Stan believes that it is unlikely for someone to display predatory behavior once in a lifetime. He argued that if the allegations were true, at least a few more victims would have come forward and shared when the case grabbed media attention.

“The thing to me that… A lot of people should think about… Usually when there’s a case like that, it’s not only like a one case… Not just one woman. So when one woman come forward, usually you hear like many other stories come out, you know. With Shawn we haven’t heard anything else. So that should tell you I guess,” Stan De Longeaux said.

Following the allegations, Shawn Rhoden lost his sponsors and Olympia prevented him from competing on their platform. However, Stan De Longeaux remembered that apart from being upset for a few days, Rhoden dealt with the situation with great patience and stayed composed.

“It was weighing heavy on him, it’s for sure. But as the time went by he was just like… Shawn was just doing what he enjoyed. Even in 2019 like the news broke out… I don’t know like eight weeks out from the Olympia or something right? I think he took a break for a few days… like a week or two where he didn’t come to Gold’s to train but then he was still training and still hoping to do the Olympia. He was ready to do the Olympia. He came to the Olympia ready to step on stage like they would let him. So he was like always hopeful,” Stan De Longeaux said.

Stan added that Rhoden was confident that the truth about the case will eventually come out and the Olympia committee would allow him to compete. Three years on, the case is still in court and with Shawn Rhoden’s passing, it is unlikely that there will be progress in the matter.

Courtesy of the Muscle And Fitness YouTube channel, you can watch the full podcast episode here:

The 9 Best Chest Exercises According to Science