The Stoltman brothers posted a heavy squat training in preparation for the 2022 Arnold Strongman Classic. 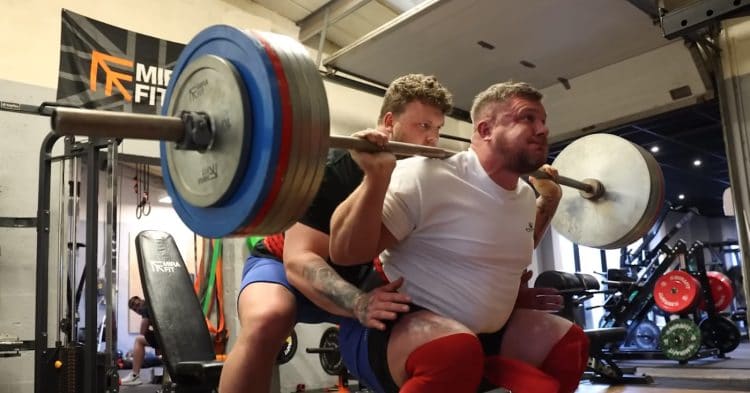 However, the brothers seem to focus more on the 2022 Arnold Strongman Classic (ASC), scheduled for March 4th and 5th in the Greater Columbus Convention Center in Columbus, Ohio. The first event of the ASC will be the Max Squat, and judging by their recent YouTube video, they seem ready. Luke Stoltman even hit a new PR Squat of 355 kg (738 lbs) for two reps.

Luke and Tom Stoltman are joined by Dr. Dan Managi of The Strength Game for a week to assess and guide them through the training. He also helped with knee wraps, so the brothers could preserve some energy.

To start the workout off, the brothers explained that the goal for the day is to do some working sets and build up to heavy doubles. For the warm-up set, they loaded 75 kg (165 lbs), after that they continued setting 50 kg on the bar and quickly built up to 225 kg (496 lbs). Before this set, the brothers started using knee straps to get used to them. Luke and Tom then did singles with 295 kg (650 lbs) loaded on the bar.

“It’s just getting that confidence in the knee wraps… I think the knee wraps are more effective with the heavier weight. It pushes you down more, and then you get that spring off the bottom,” said Luke.

Luke’s heavy squat doubles started with 315 kg (694 lbs) on the bar. Tom had a bit of a struggle with taking the bar out of the rack. His brother supported and encouraged him, so he tried again and squeezed out a single. Tom then complained about knee wraps and how his knee feels like it is popping out.

It was a perfect squat day for Luke. He upped the weight to 325 kg (716 lbs) and did two fast reps. Tom wrapped the knees himself for the next attempt and did an easy single squat of 315 kg (694 lbs)

“I just wrapped the knees my own way, and it felt comfortable. Maybe I was in my head too much that I had to wrap them in a certain way,” said Tom.

Luke again upped the weight to 335 kg (738 lbs), and it didn’t seem any heavier for him, but this was his Lifetime PR Squat Double. Tom continued squatting with 315 kg (694 lbs) and did two sets of doubles.

“It felt good, it was the same weight as last week, but for a double… We’ve ordered a couple of single ply suits… We’ll see if that adds an extra bit,” said Luke.

That marked the end of the squats, and the brothers then moved on to the leg press machine. They didn’t state how much weight or reps they were doing, but it seemed fun for them, as they started imitating Ronnie Coleman at one point.

Their coach Dan recommended some accessory work to finalize the training, as it will help them recover and work on some little imbalances. The first exercise was the Bulgarian split squat isometric hold, which helps the joints. The brothers struggled with the exercise and pointed out that it wasn’t easy.

“We’re trying to get everything working properly, and these are a safe way of really f***ing yourself up,”

This was followed up by some banded hamstring curls and calf exercises.

Courtesy of the Stoltman Brothers YouTube channel, you can watch the full workout video here: