Life and accomplishments of Steve Cook 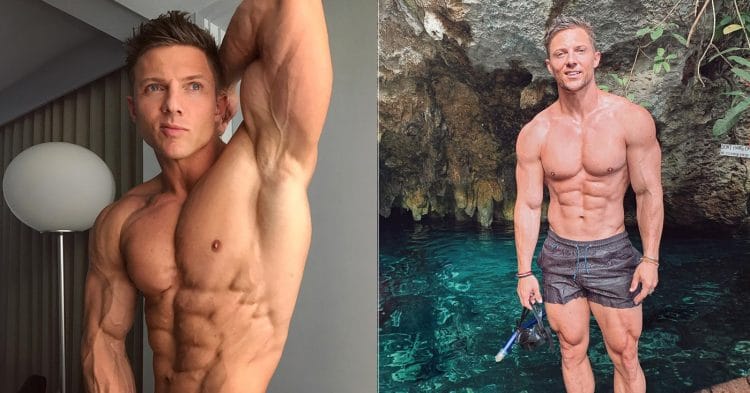 Steve Cook is a fitness model/personality and coach. This is his complete profile, biography, training regimen, diet plan, and more.

Steve Cook grew up in Boise, Idaho United States. He was surrounded by an athletic, sports-oriented family including six siblings of which he was the middle child. Cook’s father was a high school coach and athletic director who also happened to be his mentor and trainer.

He found a passion for fitness at a young age due to his athletic endeavors which also included track. But fast forward to high school and Cook was setting weightlifting records in high school while also playing for the football team. This led to him playing football in college which ended much sooner than he anticipated, at age 23.

Right around this time, he experienced a few setbacks which included a recent divorce and him dropping out of college which proved to be a wake-up call and turning point in his life.

Steve Cook’s career really took off after he was convinced to take part in the ‘Boise Fit Expo’s Fit Body Contest,’ of which he ended up winning. This inspired him to pursue other competitions which led to him entering the Muscle & Fitness Male model search competition during the Olympia weekend in Las Vegas, Nevada.

He trained super hard and ended up winning this competition as well, and the rest was history. Cook continued to participate in competitions, winning several of them.

Cook went on to become a spokesperson for Bodybuilding.com (fitness website), Optimum Nutrition (supplement company), and Gymshark (fitness apparel company). He has also graced the cover of many fitness magazines as a result of his rapid success in the industry which includes Muscle & Fitness, Men’s Fitness, and Iron Man.

Cook also has his own apparel line called “Swoldier Nation”.

In addition, he owns a gym in St. George, UT, a YouTube channel that has 1.3 million subscribers and an app called Fitness Culture. He also recently became a coach on USA Network’s “The Biggest Loser.”

Steve Cook released one of his training splits for 2020 at the end of 2019 on his YouTube channel. The routine was also part of a contest however, due to the current situation, this wouldn’t be possible. But we’ll provide you with the routine anyway.

The idea here is to train each body part twice per eight days and is based on concurrent periodization training which is the case for all Fitness Culture programs. This essentially means that rather than just focusing on one goal (e.g. strength or mass), you’ll train to make progress in all areas simultaneously.

So, the sets, reps, tempos, etc will vary and this also keeps things fun and interesting.

The beginning of the week involves low reps and volume overall whereas at the end of the week, Cook explains that the sessions will be more “Arnold style” which means lots of volume and a focus on the pump. He likes this style of training because it allows him to get stronger while also building muscle or maintaining his size.

Here’s another example of a split routine that he does…

His legs workouts, for example, involve squats (front and back), lunges, Romanian deadlift, leg press, extensions, and leg curls. This routine involves training 6 days a week, but if Cook needs an extra day off he takes it.

Steve Cook’s current diet was also posted via YouTube, titled ‘What I Eat In A Day‘.

He detailed his nutritional regime for the purpose of building lean muscle while keeping the body fat down. Below is an example diet regime he has been following recently. Cook also tracks his macros (protein, carbs, and fat), plus he uses a food scale (doesn’t use every day) and MyFitnessPal.

Cook has two parts to his breakfast. He’ll often modify the amount of each food he eats depending on his goal/s. So for example, if he’s cutting, he’ll eat one egg or he’ll have two if he’s bulking.

Below are both parts listed:

For lunch, Cook isn’t afraid to eat out and he really loves Chick-Fil-A all-around, not to mention, it’s a very macro-friendly place to eat.

Before Steve Cook trains, he has a shake that consists of oats, half a banana, powdered peanut butter, egg whites, almond milk, water, and a protein whether a hydrolyzed whey (easier on the stomach) or sometimes a vegan powder.

Cook will typically have another shake following a workout.

If Cook falls behind on his macros, he’ll have a protein bar or the G2G (Good2Go) bar which contains 18g protein, 25g carbs, and 14g fat.

For the last full meal, Cook will have 99% fat-free lean turkey, ready rice, some avocado, and broccoli. He’ll use some macro-friendly sauce as well.

Before Cook catches some Z’s, he eats some popcorn which wraps up his daily nutrition regime.

Steve Cook is currently one of the most recognizable faces in fitness. He experienced some hardships in his early twenties but would ultimately bounce back and discover he had a passion/gift for fitness, which led to a very successful career.

Every now and then he takes some time off to recuperate and in December of 2019, he nearly took the entire month off which he says allows him to fall in love with training all over again. Cook lost some gains but it was worth it to spend time focusing on other things. The majority of his days are spent traveling, working out, hanging with his French Bulldog, and doing his hobbies.