Breaking Down The Strongest Male Athletes In Modern History

Every male athlete is expected to be strong, but obviously some are stronger than others. Today we take a look at those athletes who were a step above the rest.

Our list of the world’s strongest men will be primarily looking at three types of athletes: Strongman competitors, weightlifters, and powerlifters. This is due to the fact they are the ones who are regularly measuring their abilities to lift heavy weights.  Moreover, they have the most official way of recording those lifts. This, however, does not mean that feats of strength started when strength-based sports started popping up.

There were guys like Angus MacAskill, the Scottish-Canadian 7′ 9” giant who sported an 80-inch chest and would often raise a nearly 3000lbs ship anchor to chest height. Or the famous Croton wrestler “Milo” from Ancient Greece, who took a baby calf and started walking with him uphill each day, and as the calf turned into a full-grown bull, Milo’s strength grew accordingly. Feats of strength and strength culture were alive and well way before Arnold flashed his mighty biceps in “Pumping Iron”.

So with that aside, here are the ten strongest men of all time. 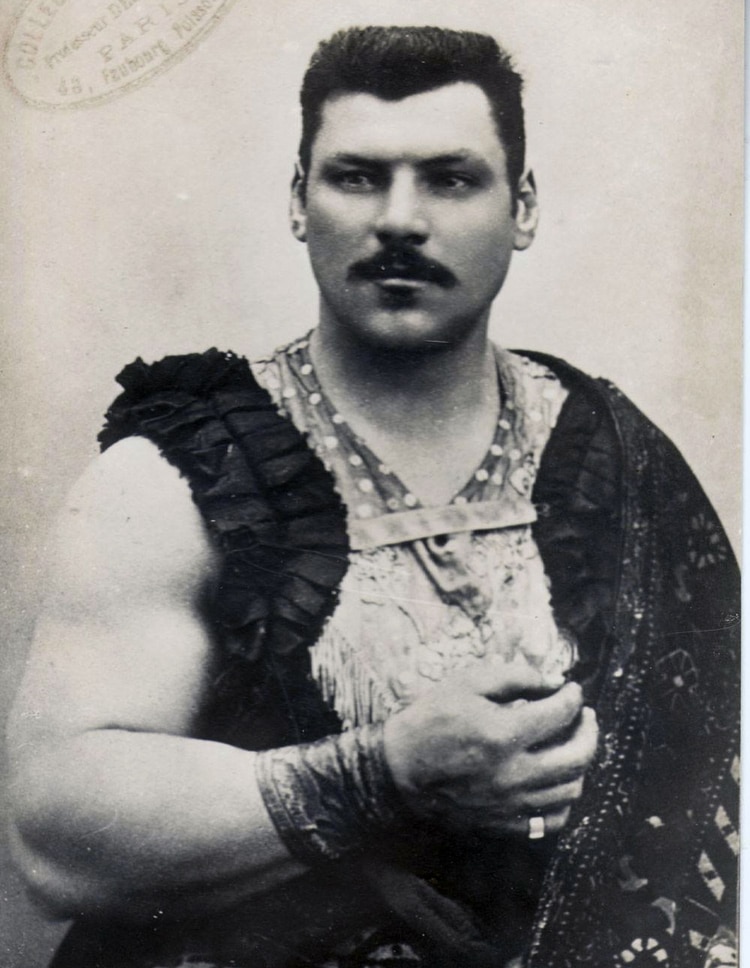 Attributed as being one of the first strength athletes, Louis Uni (a.k.a. Apollon the Mighty) was certainly a powerful man. A product of his era, this male athlete was not able to utilize the best form in his lifts, making it tough to know exactly how heavy he could have gone.

He did, however, lift over 155kg with a double barbell, which was unheard of at the time. At the time with which he was competing, there was practically nobody like him, and he accomplished a ton.

Virastyuk is the first person to be proclaimed as the strongest man alive.  His accomplishments are plenty, including wins at the IFSA World Championships, as well as second in the Arnold Strongman athletes. However his most notable records come from winning the 2004 World’s Strongest Man, as well as Ukraine’s Strongest Man six times. He put his strength on display multiple times over his career, before retiring at age 40.

No list of strongest men could be made without at least mentioning the Polish Powerhouse, Super Mario-Mariuz Pudzianowski. Pudzianowski is still the only man to be crowned World’s Strongest Man 5 times. He has competed against the titans of past like Zydrunas Savickas and against titans of today, like Brian Shaw. Even though he is a 5x WSM winner, many fans and followers of strength sports like to put an asterisk to that achievement as at the time WSM did not have the strongest competitors. However, that is not Mariusz problem and years later, his later still holds.  After being crowned the strongest human five times, he decided to try out something new and he transitioned into MMA. He is a very active MMA fighter and has even fought a former UFC  heavyweight champion in Tim Sylvia.

Julius seemingly came out of nowhere in 2019. His fame skyrocketed drastically when he broke Kirill Sarychev’s 739.6lbs raw bench press world record. The record was shrouded a bit in controversy because Julius seemingly didn’t lock out the press. However, Julius competed again few months later, breaking his own previous record with EASE. He is now on the road to bench press 800lbs raw. Which, if he succeeds would be an astounding number which will set the bar extremely high for all future competitors and it will cement Julius’ name in history books as the first human to bench press 800lbs un-assisted.

Eddie Hall has accomplished a ton in his career, winning the 2017 World’s Strongest Man competition. However what brings this male athlete to our attention today, is his unbelievable, record-setting deadlift from 2016.

He managed to somehow hit a 500kg deadlift, astounding those in attendance. That is certainly one strong man. Since that day in 2016, many have tried to match Eddie’s mind-numbing feat of strength, but all have failed. Eddie Hall is still the first and last human being to deadlift half a tonne from the floor to upright position.

Another male athlete known for his overall strength, Andy Bolton was the first person to ever deadlift over 1,000lb. However his squats were also impressive, as he has hit an astounding 1,213.5lb lift there, for the fourth heaviest in history.

Not only that, but his total lift of 2,806lb, third heaviest in history, forever cemented him as one of the strongest people in history.

What strength athlete list would be complete without one of Odin’s descendants on it. Thor Bjornsson is most famous for his onscreen adaptation of Ser Gregor “The Mountain” Clegane from one of the best shows with one of the worst endings ever, Game of Thrones.  When Hafthor is not rubbing shoulders with the Hollywood a-list, he’s a Strongman, a damn great one.

Despite barely entering his 30s and entering his prime competing years- Hafthor has already amazed a great number of feats. Such as breaking a 500kg deadlift record,1000-year-old record by carrying a 30-foot, 1,433-pound log for five steps.

He is a 5 time Europe’s Strongest Man, 3 times Arnold Strongman Classic champion, 1 time World’s Strongest Man, top contender to be the man to dethrone Eddie Hall as a world deadlift record holder and nearly a decade long reign as Iceland’s Strongest Man. All that and he’s just entering his prime years.

Many people consider Bill Kazmaier one of the strongest men in history, and for good reason. He was so successful in fact, that he was at one point banned from competing in the World’s Strongest Man. This was a result of him winning so much, that the organizers felt he was basically unbeatable.

The first person to lift all five McGlashen stones (weighing around 250-300lb a piece), and three-time World’s Strongest Man, he is one of the most credentialed competitors of all time. Not only that, but he has the world record for raw total lift, at 2,425lb, which stands to this day.

Four-time winner of the World’s Strongest Man, Brian Shaw is one of the one of the strongest male athletes in the world today. He has also won the Arnold Strongman Classic three times, as well as other notable competitions over the years.

All in all, his 903lb squat, and 1,025lb deadlift were enough to cement his place as one of the sport’s best. At 37 years old, and still competing, there is even some hope for him to further some of those records.

Zydrunas Savickas is arguably number one among the strongest men of all time. He has won the Arnold Strongman Classic for an unbelievable seven times. Compared to the more well-known World’s Strongest Man contest, the Arnold is a better-designed test of strength.

On top of that, he won the WSM four times, with a further six second placings. Some of his heaviest lifts include squatting 880lb for 3 reps, and a 987lb deadlift. His list of accomplishments and accolades goes on for a long time, which is exactly why he tops our list.

What do you think of our list of the strongest men of all time? Was there anyone we missed?