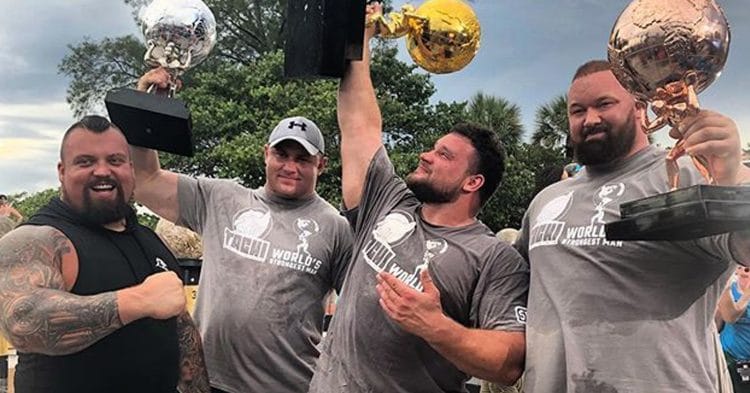 English Strongman Eddie Hall isn’t afraid to get mixed up in the drama of Strongman. But more specifically, his ongoing beef with fellow Strongman elite and new deadlift world record holder Hafthor Bjornsson.

Hall has his own YouTube channel where he takes on challenges, shares some knowledge and as of recently, talks about their popular feud.

However, it has been confirmed that these beasts are going to settle things in a boxing match in September of next year. This was already a possibility for a while now but Bjornsson challenged Eddie Hall to really make the match happen after he the beat Hall’s world record deadlift. We do know that these two giants are going to have a lot of rage built up toward each other and it’ll be a highly anticipated event for 2021.

Recently though, a video was posted on the cheating scandal involving Bjornsson and the Viking press at the 2017 World’s Strongest Man, of which he was accused of “double-dipping” or breaking the rules to put things most simply. Hall responded to this and not surprisingly applauded the video.

Then now, Hall responded to whether Thor reached out to shake his hands or vice versa.

“Eddie, do you think that the video showing Hafthor not shaking your hand discredited that video. Can we be clear on whether you are saying he didn’t shake your hand, we have seen other footage of him shaking your hand so there’s no point in lying about it.”

“Well firstly, I didn’t make that video, secondly, I’ve spoken to a number of people regarding that handshake. Each and every one of them I asked, do you think it’s a good representation of what happened in that video now that you’ve seen the whole entirety of the video? And the answer was yes.”

“Do I think it’s representative of what happened in the video? Yes, I do. I do because it’s symbolic of the whole message of the video. That message is, Thor is a bad sportsman. So how about we flip this on its head… Should I have had to put my hand out in front of him on the podium to offer a well done to him?“

Hall says he was waiting for Thor to congratulate him after they stood next to each other for 10-15 minutes. And then he went on to mention how he had always congratulated Thor when the latter had beaten him. He then told a story of when they both competed at Europe’s Strongest Man and how he ran after Thor to shake his hand after the latter won.

Hall acknowledged that the loss hurt but he accepted it and was humble in defeat and that there are no excuses.

He then explained that Bjornsson’s father was the only one from the Icelandic team to congratulate him after his 2017 World’s Strongest Man victory. But interestingly, he said that Brian Shaw told him that Thor was trying to convince him to leave Hall at the podium because he was accused of cheating.

“If you lose, you shouldn’t cry over it. You may not like it but please, I hope the world agrees with me here, we should not behave like that.” “Big men should act like big men whether they won or lost.“

“So that shot wasn’t made up. It wasn’t CGI, it may have stopped just before the point it was too long to not shake my hand. But you made it clear to everyone that I was asking for the handshake he didn’t want to offer his out. I put my hand out to say well done for coming second and that is wrong in every level. I did not receive a well done back.”

But as Hall explained, the handshake was meaningless as Thor went on to say he was robbed even up until this day.

check the video at 7:26 where he goes into detail…