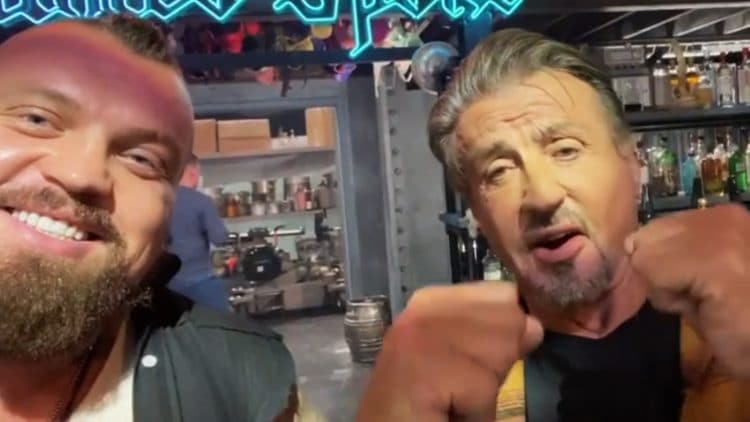 The bicep injury and subsequent recovery process have delayed strongman-turned-professional boxer Eddie Hall’s boxing debut. However, ‘The Beast’ has not allowed the setback to interfere with other professional ventures. As evident from the numerous appearances, Eddie Hall will play a villainous character in Sylvester Stallone’s action film Expendables 4.

Sylvester Stallone offered the role to Eddie Hall when the former visited the UK back in 2019. Directed by Scott Waugh, the movie will add several new faces to its ensemble cast apart from Eddie Hall. Iko Uwais (The Raid: Redemption), Tony Jaa (Ong Bak), Megan Fox (Transformers), Rapper 50 Cent, Andy Garcia (Ocean’s 11), Jacob Scipio (Bad Boys for life), and Levy Tran (The First Purge) will all make their debut in the franchise along with Eddie Hall.

Filming of Expendables 4 officially started in September 2021. On October 21st, Sylvester Stallone announced that he has finished filming his scenes for the movie. However, Expendables 4 will be Sylvester Stallone’s final appearance as the main protagonist Barney Ross. Jason Statham’s character Lee Christmas will most likely take over for the subsequent installments of the franchise.

While Hall has transitioned to boxing after his career as a strongman, Sylvester Stallone played a crucial role in promoting the sport in popular culture through the Rocky Franchise. Therefore, it is not surprising that Rocky and The Beast have bonded over boxing. Following Tyson Fury’s knockout win over Deontay Wilder in the much-anticipated trilogy fight, Eddie Hall and Sylvester Stallone congratulated The Gypsy King in an Instagram video and commended him for overcoming personal struggles en route to greatness.

“Massive congrats to @gypsyking101 From myself and @officialslystallone on your fight win you have done the country proud and the people of the world are in awe of your sportsmanship and dedication to boxing.” Caption to Eddie Hall’s post read.

Sylvester Stallone then went on to suggest that Tyson Fury could have a successful career in acting and hinted at offering Fury a role in the next Expendables movie.

“By the way, I think you’ve got an amazing career in the movies. So in the next Expendables? Done deal!” Sylvester Stallone stated at the end of the video.

2022 seems to be shaping up as an eventful year for Eddie Hall. Fully recovered from the successful bicep surgery, Eddie Hall has resumed training for his professional boxing debut against archrival and strongman-turned-professional boxer Hafthor Bjornsson. Hailed as the heaviest boxing match in history, Hall vs Bjronsson is most likely to take place in March 2022. However, the date and the venue for the fight are yet to be announced. The boxing debut combined with the release of Expendables 4 will certainly give Eddie Hall enough exposure to be successful in his new ventures.

Trap Bar Vs. Barbell Deadlift – Which One Should You Do?