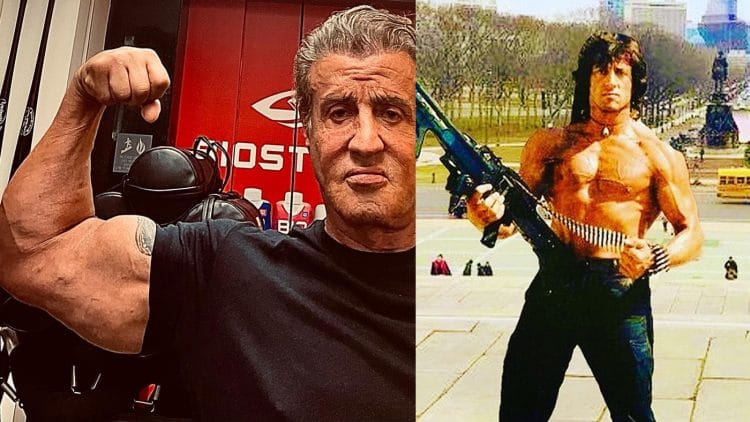 “Let me tell you something you already know. The world ain’t all sunshine and rainbows. It’s a very mean and nasty place and I don’t care how tough you are. It will beat you to your knees and keep you there permanently if you let it. You, me, or nobody is gonna hit as hard as life. But it ain’t about how hard ya hit. It’s about how hard you can get hit and keep moving forward. How much you can take and keep moving forward. That’s how winning is done!”

This is one of the most iconic phrases by Sylvester Stallone. It was not only a quote but how he lived his life. Rambo had to go through so much in life just to make it and live his dream. The man was and is still an absolute legend. Sly is one of the biggest action movie superstars in Hollywood.

What made him even more remarkable is the level of muscularity he’s displayed for the films. Stallone has one of the most iconic physiques to ever grace Hollywood. He can only be compared to the likes of Arnold Schwarzenegger, Dolph Lundgren and The Rock. Sylvester Stallone’s god-like body was as a result of hard-work and discipline. In this read, we shall comprehensively look at the Sylvester Stallone Rocky diet and workout plan.

Sylvester Stallone: The Man, The Myth, The Legend

Sylvester Stallone was born on 6th July 1946 in New York. When Sly was born, he underwent some birth complications that led to partial paralysis on the left side of his face as well as slurred speech. Sly had a difficult childhood. His parents had a hostile relationship and that ended in them getting divorced. This affected Sylvester Stallone and his younger brother, Frank. The divorce led to Stallone spending some of his childhood in foster care.

When Sly was in high school, he had to attend a special school for troubled children. After high school, Sylvester attended the American College in Switzerland, where he chose to study drama. He then attended the University of Miami and majored in dramatic arts.

While most of us only know the glamorous side of Sylvester’s career, it wasn’t always like that. When he went back to New York to pursue his acting career, Sly had to do all manner of jobs just to make ends meet. Sly first appeared on TV in an adult film titled, ‘ The Party at Kitty and Stud’s’. After that, the New York native had a few background roles in some films. The only role that is worth mentioning during this period of his career is when he played the role of a tough guy in the movie, ‘ The Lords of Flatbush’.

Sly wasn’t only an actor, but was also a writer and went on to become a director in the later parts of his career. After watching the 1975 Championship fight between Muhammed Ali and Chuck Wepner, Stallone got the idea for the first Rocky movie. He took only 3 and a half days to write the script and after that he submitted them to his agents.

Rocky went on to be more of a success than anyone expected. Rocky won awards for best picture, best directing and best editing. This launched the Rocky franchise that enjoyed even more recognition and success from the release of its subsequent movies; Rocky II – 1979, Rocky III – 1982, Rocky IV – 1985, Rocky V – 1990, Rocky Balboa – 2006, Creed in 2015, Creed II – 2018 and Creed III is rumored to be released in November 2022.

Sylvester Stallone also starred in First Blood as John Rambo. The film went on to become a huge success and led to the Rambo franchise. Sly is also known for his role as Barney Ross in the Expendables movies.

We all remember the famous scene from Rocky where Sylvester Stallone gulped down those raw eggs, right? This got us wondering, is this what he eats on a normal day? If you want to have a body like his, do you have to adapt to a raw egg diet? Well, let’s find out in the Sylvester Stallone Rocky diet program.

The Rocky franchise can easily be compared to Sly’s personal life. Throughout the series, we see the New York native dieting and working out and his body going through massive transformations. In terms of his diet, Stallone revealed that as the Rocky series continued to grow, his diet continued to become more and more extreme. Rambo was doing all this so that he could get shredded, which he definitely did. As the franchise went on, Sylvester Stallone started looking more like a mountain than a person.

Not so much was known about Sly’s diet when he was shooting the different scenes in Rocky, until he decided to shed some light on it just recently.

On an Instagram post in 2017, Sylvester posted an old photo from the set of Rocky III. In the photo he posted, Rocky Balboa was performing a handstand in the ring. Although he appeared to be in the best shape of his life, Sly revealed that the diet he was on at that time was making him both physically and mentally exhausted.

This was the caption he posted under that iconic photo.

“Just for fun… A flashback from Rocky three. Between rounds I would get lightheaded and quite exhausted. I was on a very high protein diet which did not provide Much physical or mental energy. During the period I only ate very small portions of oatmeal cookies made with brown rice and up to 25 cups of coffee a day with honey and a couple of scoops of tuna fish. Sounds incredible right?

At the time my body fat got down to 2.9 which is a really dangerous level. I may have looked pretty good on the outside but inside it was very dangerous thing to do. But I wanted the movie to be about change. How people have to adapt to different challenges because if they don’t they will be conquered.

I will always believe the adaptation is the key to survival and that’s what this story was all about … and while, getting smashed by Superstrong, CLUBBER LANG continuously four months of rehearsal plus the fight, tended to wear a person out so I would literally go to the corner between rounds, when I wasn’t directing and try to get some blood back into my head so I could carry-on with the complicated fight choreography … It’s funny, I never knew this picture existed!”

In the caption, Sylvester revealed how restrictive the diet was. The diet did not provide him with enough energy and he had to do handstands in-between the rounds so that he could get blood in his head. Sly revealed that this was dangerous and does not advocate for such a diet as it can easily cause malnutrition and other health complications.

Sly was able to change his food plan and here is a sample of his diet during the time he was filming Rambo 4, Rocky Balboa and the first Expendables.

A glass of liquid aminos

As you can see, Sly’s diet improved as this was a more sustainable, healthy and well balanced food plan. In his nutrition book, ‘Sly Moves,’ we continue to see Sylvester’s journey with food as in the book he discusses the importance of drinking water and having cheat days when on a diet.

You can’t have the body Sylvester Stallone has without hitting the gym hard and that is something he did and still does even at the age of 76. Sly’s approach to training was different with each movie. In his first movies, Rocky I and Rocky II, Stallone’s main aim was to build mass and that is exactly what he did.

In Rocky III, Sylvester Stallone wanted to have well-defined muscles. It was during this time that his body fat percentage dropped to 2.9 %. He had this to say on his training for the third installment of Rocky.

“I wanted to look like Tarzan—sleek, tight, almost catlike. I wanted to forget the bulk and go for well-developed muscles.”

For Rocky IV and Rambo 2, Sly wanted bulging and rock-hard muscles. Rocky knew he could not achieve this on his own and that is why he sought the services of Franco Columbu, a former Mr. Olympia. When Franco was asked about training Rocky, he had this to say.

“I had to charge Sly a good amount for the training because he wanted to train full out, just as if he were preparing for the Mr. Olympia contest. That meant two workouts a day, six days a week. I had to drop almost everything else in order to concentrate on getting him in the best shape of his life.”

If your dream is to look like Rocky Balboa, here is the Sylvester Stallone Rocky workout program:

Chest, Back and Abs

As you have seen, Sylvester Stallone’s workout and diet plan is no child’s play. Sly invested a lot of time and energy into his training and it definitely paid off, if we are going by his massive success in Hollywood. Sly didn’t just exercise, he exercised hard.

Sylvester’s diet plan is a bit too restrictive and it is not encouraged for anyone. Sly’s training program is not just for anyone hence it would be advisable to use it as a prototype to design your own training regime especially if you are new to the gym. If you are a regular gym goer, there is nothing stopping you from trying this soul-crushing workout program.