There are three different types of deadlift to choose from. Learn how they differ  so you can use what’s right for you.

The deadlift is arguably one of the most important strength training exercises you can do. For a start, deadlifts teach you how to lift heavy objects off the floor safely, using your legs and hips, and not your lower back.

This is a useful skill that could save you from injury, both in and out of the gym. A deadlift is also often the starting point for many other exercises, such as barbell biceps curls. After all, you’ve got to pick the bar up somehow.

More importantly, deadlifts are a pivotal exercise in many resistance training programs. They can be used to build muscle, increase strength, and boost athleticism too.  Deadlifts, like squats, are such a beneficial exercise that almost everyone who lifts weights should do them regularly.

The main muscles used in Deadlift

All types of deadlifts involve lots of different muscles. The main ones are (1)

There are several different types of deadlifts, and each one affects your body differently. Because of this, you should choose the deadlift type that is best for you.

There are three main types of deadlift – conventional deadlifts, sumo deadlifts, and trap bar deadlifts. All three involve lifting a weight from the floor but use different techniques or equipment. Knowing the difference between these three exercises means you’ll be able to choose the best one for your body type and goals.

Conventional deadlifts are the most common type of deadlifts, and the one most exercisers are familiar with. They are used by bodybuilders and powerlifters, as well as strongman competitors.

This type of deadlift is also used by general exercisers to develop all-round fitness and strength.

How to do them:

According to studies, conventional deadlifts put a lot of stress on your lumbar spine and Erector Spinae muscles (2). This is because, during conventional deadlifts, you start with your torso in a very inclined position. This lengthens the lever between the bar and your hips, which increases lower back stress.

This is not necessarily a bad thing, especially if you have no lower back issues or want to increase lower back hamstring, and glute mass and strength. Conventional deadlifts produce the most glute and hamstring activation. They also involve the largest range of motion, which may be better for building muscle mass in general.

However, if you are very tall, have a history of lower back problems, or find that your lower back limits the amount of weight you can lift, the conventional deadlift may not be your best choice.

Sumo deadlifts are performed with a much wider stance than conventional deadlifts. The start position looks a little like a sumo wrestler at the start of the bout, which gives this exercise its name. 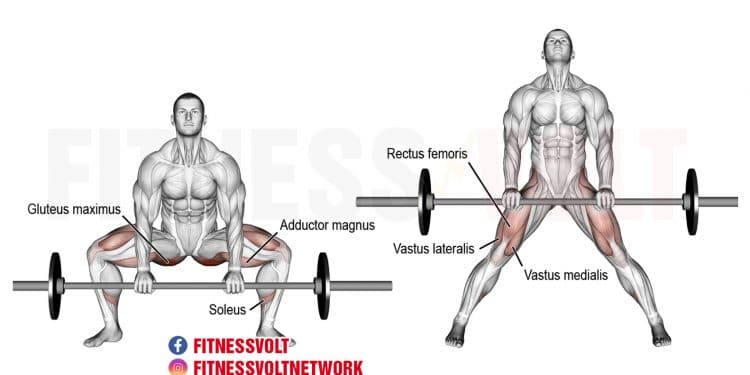 This exercise is popular with powerlifters who want to lift the highest amount of weight possible, but it is less useful for general exercisers or bodybuilders.

How to do them:

Because they are easier on your lower back, sumo deadlifts may be a better choice for tall lifters and those with a history of lower back pain. The more upright starting position and wide stance also mean that the weight does not have to travel as far as it does in conventional deadlifts. This may allow you to lift more weight.

However, lifting more weight does not necessarily mean that you’ll build more muscle mass. In fact, for muscle building, the sumo deadlift is not viewed to be as effective as the conventional version.

Trap bar deadlifts, also known as hex bar deadlifts, are a sort of squat and deadlift hybrid. The movement is very similar to squats but, instead of having a weight on your shoulders, you hold it in your hands.

The wrap up: choosing the right deadlift for you

Whatever your training goal, deadlifts should be part of your program. Each type of deadlift is different, and most exercisers should experiment with each one to determine which one is best. Do a month of each one and see how your body responds.

However, because of things like anthropometry (body shape), flexibility, training goals, and injury history, you may want to focus more on one type of deadlift than the others. That’s okay too. Use the chart below to determine your best choice and prioritize that deadlift in your workouts to achieve the results you want.