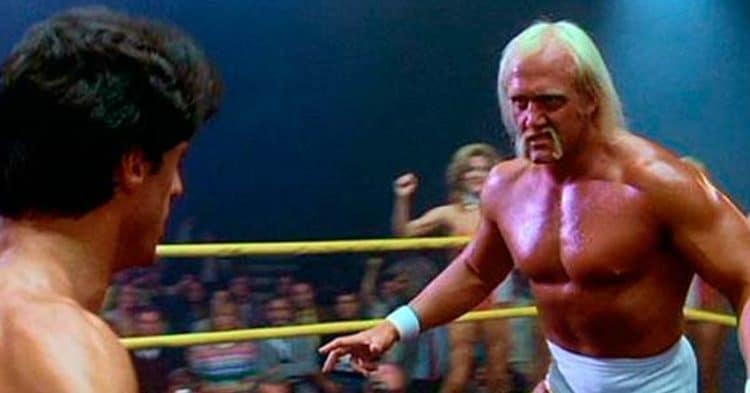 It is not usual for people in their 70s to be well versed with social media. However, Sylvester Stallone is certainly not one of them. The 75-year-old Rocky actor utilizes the tools to their full potential and routinely posts on his social media accounts. From training videos and photos to unseen behind-the-scenes photos, Stallone’s Instagram account is a treat to old-school fans.

The third installment in the Rocky series marked Hulk Hogan’s film debut. The movie featured a crossover charity fight between the protagonist Rocky Balboa (Sylvester Stallone) and Hulk Hogan’s character Thunderlips. Stallone, 5ft-9in tall, is already significantly shorter than Hulk Hogan who stands 6ft-7in. However, the height difference is even more exaggerated in the movie. The photo shared on Sylvester Stallone’s Instagram account captures the moment where the two face off before the fight begins. The behind-the-scenes photo reveals that Hogan stood on a raised platform to appear a lot bigger than Rocky!

‘Might as well let another secret out of the bag before the release of Rocky IV.’ Sylvester Stallone wrote.

Earlier this year, Sylvester Stallone had posted another photo of him and Hulk Hogan from Rocky III. The 75-year-old actor detailed a little mishap that led to what he describes as mind-numbing pain from a massive hit that he never felt before or since.

Another flashback and another reason why it’s not such a great idea to always do your own stunts! I met Terry Bollea aka THUNDERLIPS aka HULK HOGAN In the very early 80s when I was directing Rocky III. AT 6feet 7 and 295 pounds with 24 inch biceps ! He was an amazing athlete! Incredibly powerful.

I remember a violent move where he threw me into the corner , charged across the ring like an ENRAGED bull and leaped so amazingly high Above me,that his shinbone actually came down giant tree on my collarbone , and I tumbled to the floor. I was afraid to look at my shoulder for about 10 minutes … I said “don’t roll me over , don’t move me, ” because I was sure there was bone protruding through my upper chest ! Of course there wasn’t but I have never felt such a mind numbing pain from a massive hit before or since that day! HULK Just didn’t know his own strength.

Believe it or not when he jumped into the audience to fight with the stuntmen , three of them had to be treated at the hospital. Great guy, great friend, his presence made the Film very very special. HULK , if you’re reading this, it was a privilege to be mangled by such a gentleman.

The post promotes the re-release of iconic Rocky IV

The caption refers to the theatrical release of Rocky IV: Rocky vs Drago: the Ultimate Director’s Cut. Fourth and probably the most famous movie of the Rocky series, Rocky IV is a cold war era classic that featured some of the most incredible scenes of Sylvester Stallone’s career.

The director’s cut of the movie includes approximately 40 minutes of extra footage that was edited out at the time of its initial release back in 1985. It is scheduled to release on 11th November for one day only and will be available for streaming from 12th November onwards. A release announcing the screening reads:

‘The fight scenes are more intense, the music is more powerful and the drama is heightened as world heavyweight champion Rocky Balboa must defend his title once again, this time against his most formidable opponent: Ivan Drago.’