Tamara Walcott displays an amazing outing in the gym and proves that she is the greatest women's deadlifter. 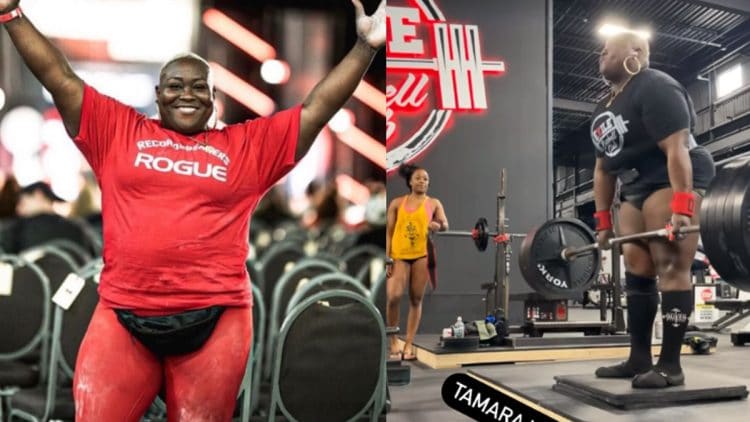 Prominent powerlifter Tamara Walcott recently broke the elephant bar deadlift World Record, which additionally cemented her position as the greatest women deadlifter of all time. However, despite all the records and titles, Tamara is still not satisfied with her numbers and is working hard to improve them. So on April 9th, Tamara shared her most recent training progress when she pulled out a massive deadlift. In her post, Tamara Walcott can be seen doing a deficit deadlift loaded with 500 lbs (227 kg) for three paused reps.

Tamara has recently incorporated the paused reps into her training, putting an emphasis on the control of the weight. She also stated:

“I will pause all reps until the last day of prep if I have to… Doing the things I hate, if it means getting the results I want!”

Tamara Walcott only used a lifting belt and wrist wraps for her deadlift set, which is considered raw by the powerlifting standards. She was also standing on an elevated surface, making the starting position much harder.

As compared to a regular deadlift, the deficit variation presents more of a challenge and puts emphasis on the back. Powerlifters incorporate this exercise in their training to help build strength and force production off the floor. The deficit deadlift benefits are increased quads strength, posterior chain strength, lower back strength, increased time under tension, and greater force production. Adding a pause makes it even harder, so Tamara Walcott’s 500 lbs (227 kg) three reps are beyond impressive.

Tamara Walcott has gotten in the gym following a failed marriage and some more setbacks in her life. She wanted to keep on living for her two kids, so she got back to training and lost a lot of weight. It was there that Tamara met her current powerlifting coach who would ultimately guide her to becoming the greatest female deadlifter in the world.

“I started working out doing dumbbell training and in the course of that, I lost over 100 lbs… If I have a goal, I want to accomplish that goal. I wanted to be a powerlifter, so I did it.”

Despite taking up powerlifting relatively late at the age of 34-years-old, Tamara Walcott has accomplished a lot since her first competition in 2018. She took part in 8 sanctioned competitions and won 7 of them. In the process of competing, Tamara has claimed the All-Time Deadlift World Record and the All-Time Second-Heaviest Total in the 90+ kg weight class. The most notable competition she won was the 2021 WRPF Bucked Up Showdown.

It is unknown what the next step for Tamara Walcott will be, but it seems like she is preparing to dazzle everyone in her next competition. Tamara has competed against both the greatest powerlifters and Strongwoman athletes, managing to beat them all. Now she is incorporating some important variations to her training, which will definitely further improve her pulls. Tamara Walcott is probably aiming to become the first woman to deadlift 300 kg (661.4 lbs) raw.

The Best Kettlebell Arm Workout For Building Size and Conditioning