Taylor Atwood becomes the first in the 74kg class to powerlift a total of 812kg/1790lbs. 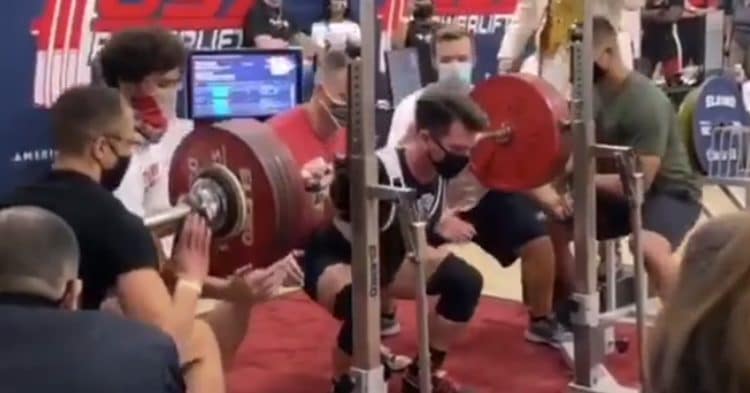 In his own words, Taylor Atwood says he, “crushed it,” breaking a world record at the Powerlifting Florida State Championships. He became the first in the 74kg weight class to crush the 800kg benchmark, by lifting 812kgs/1790lbs. For each of the lifts in his category, he also crushed new American records.

Weights are moving all around for Atwood, as he increased his own personal best total by 93lbs while coming to the competition five pounds lighter.

His best numbers for the weekend were:

All three in this series beat American records.

Atwood took to Instagram today to share the good news, and give a nod to The Strength Guys as well as a “crowed hyped as hell.” He said the “squats were flying” and even said he wanted to be “conservative” in his attempts.

He also said, “Honestly I felt like I could pull anything.” That’s exactly the zone you need to be in to win, and Atwood found it.

Squats were flying, so decided to be conservative and go for an unofficial world record of 293kg, crushed it.

Bench was moving okay, but had been training on a fat pad and they add some kilos to your bench, so be cognizant of training on one versus an Eleiko. Was aiming for 200kg on bench, but called 199kg and I honestly didn’t have another kilo in the tank (pat on the back lol).

Deadlifts….mann. Absolutely insane progress. 1st and 2nd attempts moved really well and decided to go with 320kg as that was the “A” attempt. Crushed it. Honestly, I felt like I could pull anything. Thank you again for the support and it feels great to be the one continuing to push the boundaries for others. If you combine mind, body, and spirit, amazing things can happen.

Atwood clearly has both the mind and the strength of a winner. The International Powerlifting Federation has him ranked third, and The Strength Guys have Atwood pegged as one who could pass Ashton Rouska, currently in second.

Taylor Atwood’s career also show six wins between 2014 and 2019, and this weekend he is showing his competitors he is a growing concern if they want to stay in the top spot.

Final List of Competitors Qualified For 2020 Mr. Olympia In Every Division