No Result
View All Result
Training
Evidence Based
Evidence Based Research
This article was written by one of our qualified writers, and fact-checked by our experts. The numbers in parentheses (e.g. 1, 2, 3, etc.) throughout the article, are reference links to peer-reviewed studies.
Our team of experts include a board-certified physician, nutritionists, dietitians, certified personal trainers, strength training experts, and exercise specialists.
Read Our Editorial Process 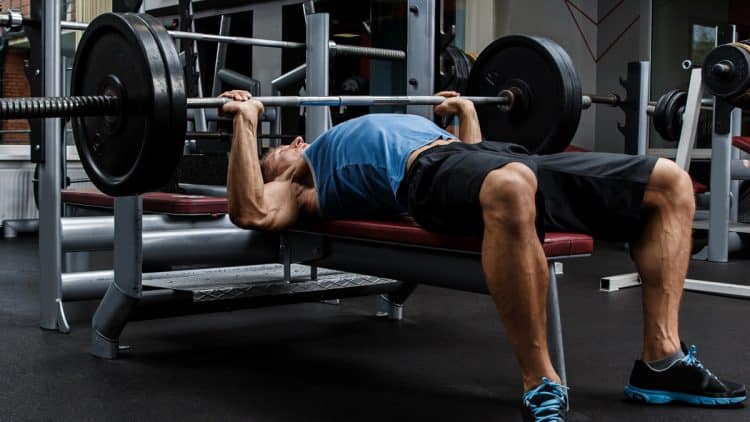 The bench press is one of the most basic strength training exercises and is amongst the first lifts a newbie trainer learns after joining a gym. This compound (multi-joint) movement primarily targets your chest but also engages your shoulders, core, and triceps.

Most people tend to start their chest workouts with the bench press. However, performing three sets of 8 to 12 reps with almost the same weight every week will sooner or later lead to a plateau.

If you are experiencing stagnating gains, it’s time to modify your bench press technique. Changing your rep tempo is one of the best ways to shock your muscles into growing. Enter, tempo bench press.

What is Tempo Bench Press?

Tempo bench press involves altering your muscle’s time under tension (TuT) by switching up the time spent on the eccentric, concentric, and contraction points. TuT is the total time your muscles are under tension during a lift.

According to a 2012 study published in the Journal of Physiology, increasing your time under tension can improve your protein and muscle synthesis, leading to muscle hypertrophy. [1]

There are three ways of tweaking your TuT. You could increase or decrease the number of repetitions you perform in a set; increase or decrease the time you spend performing each rep; or both. You could achieve your goal time under tension with each technique. However, you might have to use different amounts of weights. For the scope of this article, we will focus on changing your TuT by changing your rep tempo.

Rep tempo is nothing new. Every lifter, knowingly or unknowingly, uses it in their training. However, advanced lifters mindfully alter their time under tension by changing their rep tempo to get the best bang for their buck.

Per experts, tempo training allows the smaller motor units to be exhausted and activates the larger motor units of the muscle. It produces the maximum amount of force to achieve hypertrophy.

Most lifters use the 1-0-1-0 rep tempo while performing the bench press. Confused? Don’t be. What you’re about to learn next will open your eyes to a new world of strength training.

Read also: Time Under Tension – Does it Matter or Just a Myth?

What is Rep Tempo?

A rep tempo is a sequence of four numbers. This is how to decipher the 1-0-1-0 bench press rep tempo:

You can have thousands of permutations and combinations of rep tempos by changing the time spent on each part of the lift.

Increasing your TuT by following a slow rep tempo forces you to focus on muscle contraction with every rep, making each set more deliberate.

How To Master Tempo Bench Press

When performing the tempo bench press, you need to focus on three aspects of the lift — speed, tightness, and control.

Modifying your bench press rep tempo requires you to change the speed of your set. Tightness here refers to the muscle tension while performing the lift. Finally, control involves following the same movement path for the entirety of the set.

Although these are three distinct factors, they are interrelated. You need to balance the speed, tightness, and control to make the most of this training technique. 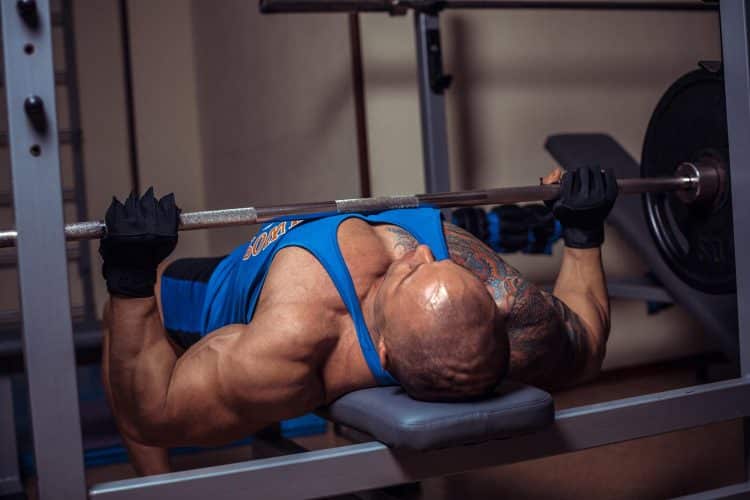 How To Choose Weight For Tempo Bench Press

Choosing the right weight for the tempo bench press can be tricky. While some people try to lift a percentage of their 1RM (one-rep max) and end up lifting too heavy, others leave gains on the table by going too light.

Determining the right weight to use for the tempo bench press requires you to use the trial and error method.

Meaning: While performing a tempo set, you need to use a weight that allows you to achieve your set’s rep and time target.

For example, let’s say you can bench press 315 pounds for 10 reps. In a conventional bench press set, this set might take 20 seconds, assuming you’re following a 1-0-1-0 rep tempo.

In a tempo bench press set for building muscle mass, you need to do at least 4-5 reps in 40-60 seconds. You probably won’t be able to meet these conditions with the same 315 pounds — unless you’re Larry Wheels. So, you should drop a plate on each side and try to achieve your rep and time goals with 225 pounds.

A few attempts with different weights will get you to the right weight for your tempo bench press set. However, as a rule of thumb, you should go lighter than you think you need to while performing your initial tempo sets. You can always build up from there.

Here is how to tempo train for different goals:

While tempo training for muscle endurance, your main goal is to spend between 60-75 seconds under tension per set. The rep tempos will look like this — 8-2-4-2, 10-2-2-2, or 6-4-2-2. Performing 4-5 reps using these tempos will put you in the sweet spot for building muscular endurance.

You can lower the time under tension significantly if your primary goal is to build strength. 2-1-0-1 or 1-1-0-2 are viable strength-building tempo rep schemes. Use 80-85 percent of your 1RM for this rep tempo scheme and perform 2-3 reps per set.

Here are the advantages of using rep tempos in your bench press training:

Like most advanced training principles, tempo training is designed to help you pack on size and strength. The slow concentric motion of the tempo bench press engages and breaks more pectoral muscle fibers than the conventional rep tempo scheme. It helps build bigger and stronger pecs and increases energy expenditure during training.

Tempo training is one of the best ways to break through the overhead ceiling if you’ve hit a strength or muscle plateau.

It is one of the most obvious benefits of tempo training. A longer time under tension can help you establish a better mind-muscle connection as it allows you more time to focus on your pecs while performing the bench press.

If you follow the conventional 1-0-1-0 rep tempo on the bench press, switching to a 3-1-1-1 tempo bench press could leave you with pec-ripping muscle pumps. 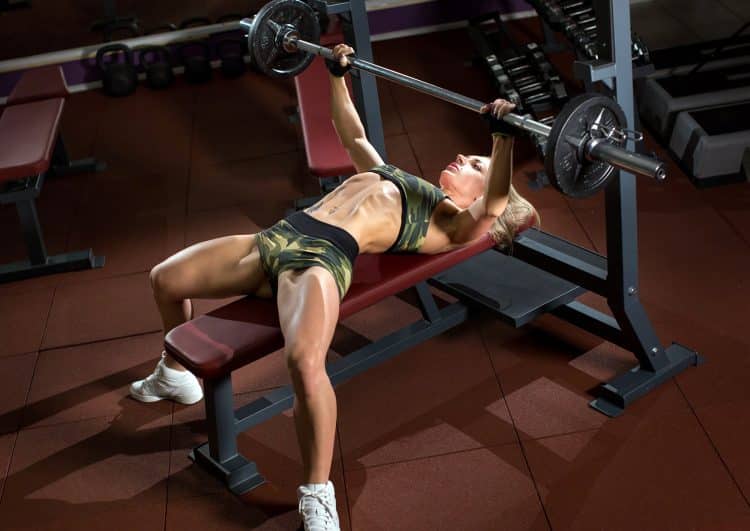 When you have more time to perform a task that you are familiar with, you will likely do it with a better (read: ideal) technique. Most lifters focus on perfecting their form when they have six seconds to perform a single rep (3-1-1-1). Six seconds might not sound like a lot, but it feels like an eternity when you are under a barbell.

On a tempo bench press, you’ll find yourself focusing on the angle of your elbows with your sides, touching the bar at your nipple level, and maintaining an arched back throughout the motion.

While most people can tell you a lift they are not good at, they probably cannot point out a reason behind their weakness. Many people avoid bench presses because they are weak on the concentric part of the lift.

These lifters can lower the bar with relative ease but cannot push the bar to the starting position. They either bounce the bar off their chest to use momentum and make the lift easier or get a spotter to help them.

However, when you only spend two seconds on a lift (1-0-1-0), you cannot figure out the reason behind your weakness. It is only when you increase your time under tension that you realize the issue of your weak bench.

When you are in total control of the weight throughout the entire range of motion, you will eventually build muscle mass and strength. However, it is harder to lift heavier on the bench press (or other lifts) or move the same weight for more reps as you get more advanced.

Increasing your time under tension can shock your muscles into growing. If you are stuck on a 315-pound bench press and cannot do more than three reps, it is time to tweak your rep tempos.

In the first session, spend three seconds on the eccentric motion of the bench press. Increase it to four seconds on the next one and five on the one after that. You might not add weight or do more reps, but this technique will help you build strength and explosiveness.

Lifting too heavy too soon is one of the most common reasons for injuries during resistance training. However, tempo training requires you to do just the opposite.

In the tempo bench press, you’ll be lifting lighter (or the same weight) for the same number of reps (or less) while focusing on your form, reducing your chances of injury.

A 4-0-1-0 rep tempo involves four seconds of eccentric (lowering) motion, no pause at the bottom, taking one second in the concentric (extending) motion, and no rest at the top.

Which is the best rep tempo?

The best rep tempo for you will depend on your training goal. For powerlifters and weightlifters, the ideal tempo would be 2-1-0-1, meaning two seconds on the way down, one second’s worth of pause at the bottom (and top), and drive as fast as possible off your chest. On the other hand, if you are a bodybuilder, you might prefer a longer rep tempo like 4-2-2-2 for optimal muscle fiber recruitment.

Since the tempo bench press focuses on speed, tightness, and control, your priority while using this training technique will be to follow the perfect training form and use moderate weights, lowering your risk of injury.

Why does the tempo bench press have slower eccentric motions?

Tempo bench press generally includes a slower eccentric phase than the concentric phase as you have to work against gravity while returning to the starting position, which adds a level of difficulty of its own.

The tempo bench press is a great way to break through training plateaus, gain strength, and build a barrel chest. Plus, it will teach you the significance of speed, tightness, and control in resistance training.

Before we go, here is a small tip — always get a spotter to time your tempo sets. Most people rush through the seconds when they struggle to complete a set. An unbiased spotter will ensure you’re not leaving gains on the table. Best of luck!

Barbell Row vs. T-Bar Row: Which One Is Better?

What do Superman, Batman, the Incredible Hulk, Thor, and most other macho superheroes have in common? All of them have...