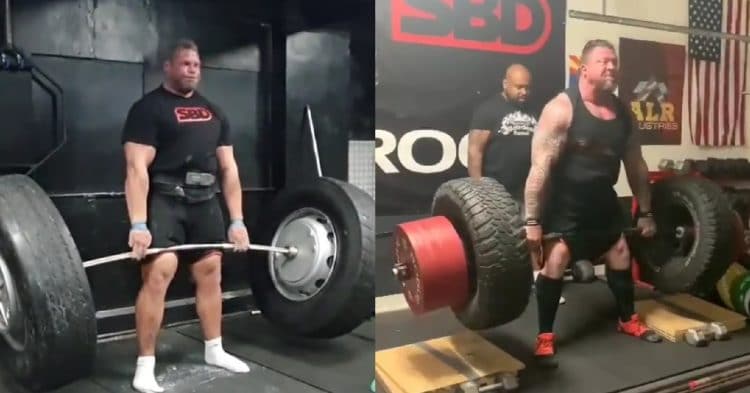 With the 2020 World’s Strongest Man rapidly approaching, strongman athletes from around the world are hard at work to prepare for this event. For Jerry Pritchett and Terry Hollands, this resulted in some jaw dropping deadlift sessions in the training room.

It has been a slow run for strongman competitions in 2020, due to the global pandemic. The best we have seen this year is a handful of competitions and two seasons of the World’s Ultimate Strongman Feats of Strength series for athletes trying to break world records. However the year will be ending strong, with the 2020 World’s Strongest Man set to kick off in about two weeks. Although big names like Hafthor Bjornsson and Martins Licis will be missing from the roster, there is still plenty of top tier talent who will be competing in the contest.

Among these elite competitiors is Arizona’s own Jerry Pritchett, as well as British strongman Terry Hollands. Both men have been grinding hard to prepare for the WSM, and they each had their own impressive deadlift training sessions in the last few days. First up was Pritchett, who did a block deadlift at 18in, pulling a whopping 502kg, and uploading the video to Instagram.

Now this was ultra impressive in its own right, considering this is a heavier pull than the record for biggest traditional deadlift of all time, and a number that Ivan Makarov recently failed to hit. However this was actually not the most impressive of the two performances. Terry Hollands managed to make this look like child’s play when he too did an 18in block deadlift, working  up to a mind blowing 520kg.

“Final heavy week of 18″ deadlifts. Worked up to 520kg. Strength is good and excited to get out to wsm. 2 weeks tomorrow till the contest starts”

Final heavy week of 18″ deadlifts. Worked up to 520kg. Strength is good and excited to get out to wsm. 2 weeks tomorrow till the contest starts

Both of these men looked ultra impressive in their own ways, each pulling gigantic numbers. It was crazy to see Jerry Pritchett pull 502kg, even on an 18in block. However Terry Hollands blew that away with his own 520kg deadlift, making it exciting to see these two go head to head when the 2020 World’s Strongest Man comes along.