Take a look at what it takes to feed a mountain 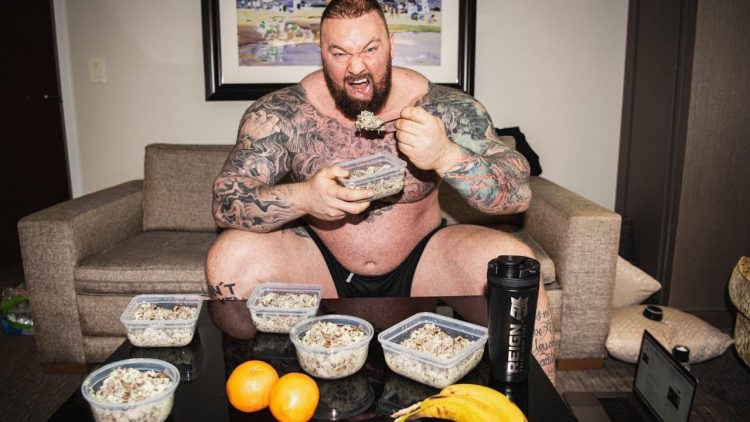 As we enter Arnold Strongman Classic weekend, the current champion, Hafthor Bjornsson, decided to share his daily eating habits.  Hafthor is one of the many many followers of the famed Stan Efferding’s “Vertical diet” . Stan has a bunch of videos on the vertical diet on his channel and loves to drop quality knowledge for your entertainment and education. The long-short of his diet is that it’s basically based on quality fats and red meat while also focusing on essential micro and macronutrients. Thusly, making each meal a nutrient bomb energy and muscle growth.

Hafthor’s day of eating starts at 7 am with a 6 egg omelet with a side of bacon strips and bread. After the first meal, he goes for a by a brisk 10-minute walk to get the blood flowing and help digestion.

Being a man of +400lbs means he has to eat a lot and often. So the second meal comes about two and a half hours later. The second meal, which Thor admits isn’t all that aesthetically pleasing but swears it tastes amazing, is a rice spinach and bison meat mix with a fist full of various vitamins and minerals. Finishing the second of six scheduled Thor goes for a walk on the treadmill while snacking on a mandarine. Later on, he does various promo stuff for the Arnold Classic and meets few fans. Keep in mind, this year’s Arnold is closed to the public due to the coronavirus scare that’s currently sweeping the planet, so there’s not a lot of meet and greats going on.

It’s now 12 pm, noon, and Hafhtor is snacking on some more Bison and rice combo. He says that Bison is his “go-to” choice for meat because it’s easier to chew and since he eats 6 full meals a day he does a lot of chewing. This isn’t something a regular person would take into consideration since a regular-sized person doesn’t eat nearly as much food as Hafthor does. For instance, If you have diet of around 3000 calories per day, you would need to consume your daily caloric intake 3 times in a span of 24 hours to eat as much as Hafthor does and even then, you would be 1k calories short.

Thor, his wife, and his crew go out to eat, but Thor is so hardcore, he has his own food ready. He eats a mix of steak, spinach, rice, carrots, and chicken broth. Hafthor also mentions that he added “ax” into the mix, which leads me to two conclusions. He’s gone insane and is actually spicing his food with the body spray of the same name or he is eating “Ox” meat. Thinking about it a bit more, I’m probably wrong on both parts but it’s fun to speculate. Now that the meal is done, Thor goes for another 10-minute stroll for some sightseeing and digestion help.

Bison is on the menu again, with some more spinach and some more rice and a couple of carrots for the hell of it. By this point, you can actually see Thor is had enough of this eating but following the wise words of the late Rich Piana “you gotta eat big to get big” he downs the meal. He says the secret is in “tricking” your mind into believing the food is amazing and that you can eat more despite being full. After meal 5, it’s more hanging out with the buddies and the wife.

The final meal is reserved for some restaurant eating with Martins Licis, Thor’s strength coach and the rest of the crew. After the meal, Thor refects that it was a cheat meal of sorts and tries his best in remembering everything he ate. Some of the food he ate were french fries, steak, veggies, chicken wings and a whole bunch of other food.

We will see how this diet helps Hafthor Bjornsson in his third title defense at Arnold Strongman Classic.