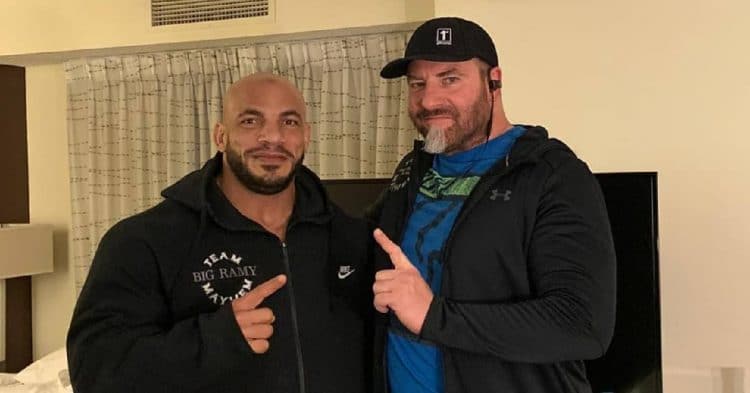 Big Ramy is looking to make his return to competing in a year and a half, at the Arnold Classic this weekend. Ahead of the contest, he and his coach Chad Nicholls discuss the work they put in to get here, and their goals for this return.

Big Ramy is one of the most popular figures in all of bodybuilding. Since his last competition, at the 2018 Olympia, fans have been anxiously awaiting his return to the stage. That time has finally come, as he will be competing at the Arnold Classic, this weekend, in Columbus, Ohio.

Ahead of his first time competing at the Arnold Classic Ohio, Ramy has been looking impressive. He is known for his massive size but seems to be bringing a seriously improved physique, making him one of the favorites to win the contest. A major part of the reason for this improvement can be clearly attributed to his coach, Chad Nicholls.

Ramy and Nicholls spoke prior to the event, about the long road to make it to this contest. Here, they explained why the Arnold was the right contest to return to, and how hard they have been working. Furthermore, Chad explained what his goals were, for getting his athlete ready to take the stage.

When asked from Ramy his experience working with Chad:

“CHAD IS A BIG NAME IN BODYBUILDING, HE HAS A BIG HISTORY AND I’M REALLY HAPPY TO BE WORKING WITH HIM. I’M STILL THANKFUL FOR HIM BECAUSE HE GAVE ME THE CHANCE TO BE APART OF HIS TEAM.

Nicholls went on to explain that everyone has these high expectations for how they want Big Ramy to look on stage. However, his intent was to give the Kuwait native the easiest prep possible for this contest. Chad wanted to take as much off of Ramy’s plate as he could, leaving him to just train, and spend time with family.

Clearly, both men enjoy working with each other. Big Ramy spoke in a different interview, with Muscular Development, about his relationship with Chad Nicholls. Here, he reiterated that this relationship has helped him get to this point and that he is excited to make his return to competition.

It is nice to see someone as talented as Big Ramy find a coach that he works so well with. Moreover, it is even better to see Ramy back to competing after such a long layoff.